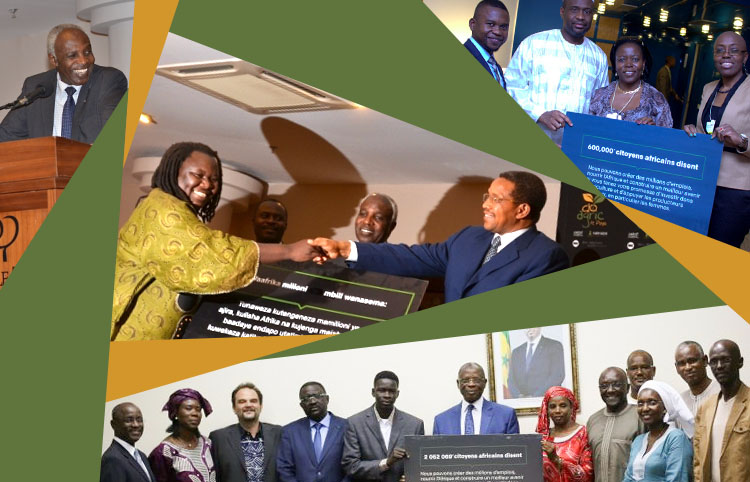 On January 20, in Addis Ababa, Ethiopia, we launched the Do Agric, It Pays campaign. The campaign called on African governments to keep their promises to invest in agriculture and support smallholder farmers when they meet at the AU Heads Of state summit in June in Malabo, Equatorial Guinea.

Over the course of the campaign, over 2 million Africans rose to the occasion and joined us in sending this message to our leaders by signing the Do Agric petition. These actions made this the biggest mobilisation in ONE’s history! Wow, how historic!

Armed with this mandate, we took the message to our leaders. We delivered the Do Agric petition signatures and policy recommendations to four Heads of State, a Vice President and six Ministers of Agriculture in a total of 10 countries!

Presidents Jakaya Kikwete of Tanzania, Yayi Boni of Benin, John Mahama of Ghana and Mahamadou Issoufou of Niger all received the petition, and undertook to take action at home and to take the call by the two million petition signers to their peers at the African Union Summit that recently took place in Equatorial Guinea.

In Malabo, African leaders re-affirmed their intention to devote 10% of their national budgets to drive agricultural transformation in your country. Better still, they committed to achieving targets such as doubling agricultural productivity, halving post-harvest loss, increasing youth participation in the agri-business by 30% and reducing stunting to 10% across Africa.

This is a massive victory for millions of Africa’s smallholder farmers and those whose lives depend on these commitments. And it wouldn’t have happened without ONE members!

While we celebrate the Malabo results today, we know the battle is not over until our leaders live up to their promises. As ONE, we call upon you to help us ensure your national government deliver these powerful promises into concrete programs.

If you are one of the two million people that joined the Do Agric campaign:thank you. Your contribution has planted the seed that is changing Africa’s future by making agriculture cool on the continent.