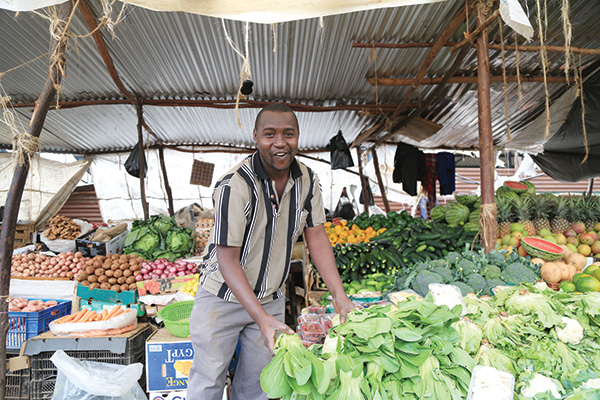 He worked as an electrician on farms and realized that farmers there had invested heavily in horticulture.

“The market was there, and the returns were good,” the Kenyan farmer said.

“I realized that I was wasting my time in South Africa and that I could do what they were doing on my farm back home.”

So, unlike many other young Africans looking for greener pastures who settle in South Africa permanently, Githu returned to Kenya last year to live on his family’s 10-hectare farm.

The farm is about two hours’ drive from downtown Nairobi in an area called Githu, which, with its cool and wet climate, is conducive to dairy farming and tea growing. Dairy farmers in the area have pooled their resources to sell milk in eastern and central Africa.

A similar undertaking is Palmhouse dairy factory, about 1 kilometer from Githu’s home, and he is optimistic that it will be just as successful.

Tea plantations blanket the steep slopes characteristic of the area. These bushes are ideal for conserving soil, and tea prices have been stable for many years, Githu said, so from when he was young, the industry has been blessed with success.

Yet, Githu wanted to do something different.

He cleared about 4,000 square meters of unused flat land and planted five grams of Chinese cabbage seeds that had come from South Africa. He also planted normal cabbages, celery and parsley.

However, the Chinese cabbages were the fastest-growing and looked just as impressive as the ones he had seen in South Africa.

He then decided to search for different Chinese vegetables, and he soon came across bok choy seeds, which grew just as successfully.

What greatly surprised him was the positive response from the market.

“I went and talked with vendors at Nairobi City Park Market and I received orders that I promptly met. I also got a good idea of what else I should plant, because the supply of Chinese vegetables to the market was poor. I had the land, and the market is there,” Githu said.

For many years, the Nairobi market, about 10 minutes’ drive from the downtown area, has served the large Indian community that surrounds it, and is known for the wide range of vegetables on sale rarely found in other markets around the city.

Githu not only established contacts with the vendors, but also secured orders from two restaurant owners who each week buy more than 20 kilograms each of his vegetables. He delivers twice a week.

Peter Mukami is one of the vendors he supplies. Mukami has been in the business for five years, and says that over that time the market for Chinese vegetables has grown steadily.

“In fact, demand has drastically outstripped supply,” he said.

Another trader, Paul Ng’ang’a, said he has traded in Chinese vegetables for 10 years. Prices are depressed at the moment because of a surfeit of supply, he says.

“We’re selling a kilogram of Chinese cabbage for about 50 cents. When supplies are low, they can sell for double that.”

He personally goes to the farm where he buys vegetables, he said.

“The rise in demand has been in line with the growing Chinese population in Nairobi, but Indians and a growing number of locals eat these vegetables, too.”

Increased demand among locals for organic and nutritional food is also driving supplies, he says, adding that he has picked up tips from the Chinese on how to prepare the food, and he passes these on to locals.

“Trading in this market is more than just buying and selling; it is becoming personal.”

The Chinese population grew markedly in 2008 and 2009, when work began on building the 50-km Thika highway, which links Nairobi with the town of Thika.

It was the biggest infrastructure project in the region before work began on the standard-gauge railway, the 609-km line that will link Nairobi and the port city of Mombasa, which is being built by the China Roads and Bridges Company.