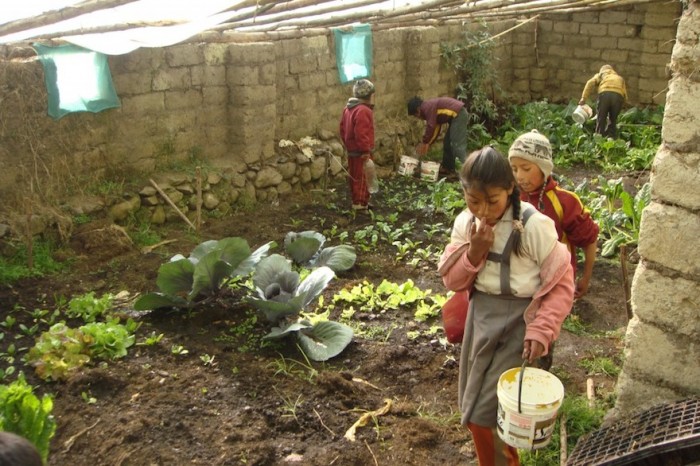 A social development project in the Andes Mountains has changed the diet and farming methods of highland Peruvians.

There was no such thing as a balanced diet for Peruvians living in the Andes Mountains until a locally based non-profit, The Andean Alliance for Sustainable Development came along with a bright idea – greenhouses. Together with the Middlebury Institute of International Studies at Monterey, the NGO implemented a community project aimed at developing sustainable greenhouses for local schools and homes in the highland regions.

Before the greenhouses (fitotoldos) went up, most Andeans got by from subsistence farming, living off what they grew in their small fields. The extreme mountain climate and poor soil composition is not ideal for farming and resulted in a local diet made up of only potatoes and corn. This, in addition to the fact that the remote villages have no access to produce trading, led to unbalanced diets and a high level of malnutrition in children and adults.

The introduction of greenhouses would enable Andean communities to start growing a wider variety of crops, which would help to improve their poor diets. To kick off the project, the NGO team and student volunteers focussed on schools in the area in order to speed up the pupils’ intake of nutritional foods they wouldn’t get at home.

The greenhouse is based on a basic model, which includes stone walls, a plastic roof issued by the government, and a wooden door. Not only were locals taught how to build the structure but they were also shown how to effectively cultivate the space inside, using natural pesticides and organic fertilizers made from local resources like garlic or cactus plants.

The project has taken off amongst Andean communities who have now taken it upon themselves to build their own family greenhouses, which they call fitotoldos familiars. As more people are embracing the new system, others are starting to experiment. A single mother of four, Anastasia has started growing non-regional crops such as pineapple.