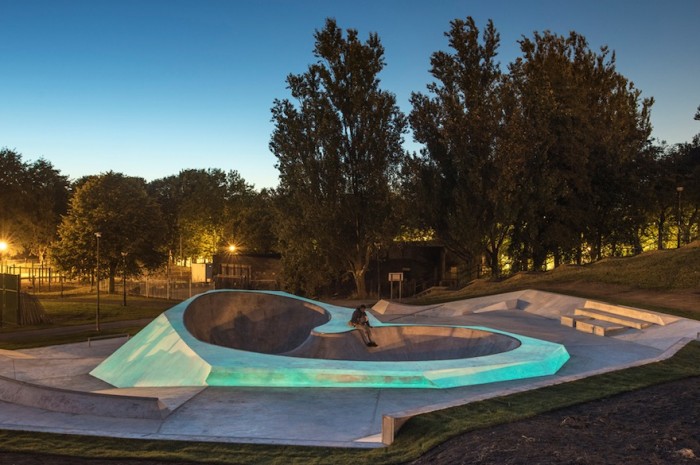 Liverpool now has a glow-in-the-dark skatepark, designed by Korean artist Koo Jeong A.

The UK’s now has its first ever glow-in-the-dark skatepark in Everton, Liverpool. Commissioned by the Liverpool Mayor Joe Anderson and the Liverpool Biennial, the skatepark – named Evertro Wheels Park – was designed by South Korean visual artist Koo Jeong-A, whose work combines site-specific installations and architectural design.

Covered in phosphorescent paint, the glowing skatepark is part public art, part youth entertainment and is a component of a regeneration programme in a deprived area of Liverpool. Wheels Park aims to bring together the local community, local skateboarders and the city council. The park opened to the public on Tuesday 6 October.

The landscape of the park combines traditional skate features with theatrical art: the artist claims she wanted skaters and riders to feel challenged and excited by the space so it includes steep slopes and sharp angles. It also serves as a space for contemplation in the city.

The skatepark is in Everton, Liverpool, and is part of the new Everton Park Action Sports Hub. There are plans for a further five skateparks around Liverpool.

The 2016 Liverpool Biennial, a festival of contemporary art, runs between 9 July and 16 October 2016.