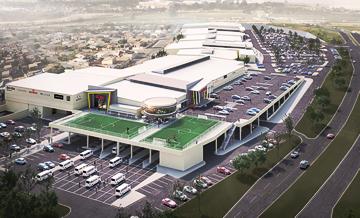 It’s all systems go for the construction of a new multi-million rand shopping mall in Johannesburg’s Alexandra Township — Alex Mall.

Despite consumers’ seemingly waning appetite for retail therapy in SA, at least 30 new shopping centres, varying in size from 5000m² right up to 120000m², are expected to open their doors this year and next.

Often perceived as the poor, forgotten neighbour of the prestigious Sandton, the township of Alexandra is set to elevate itself closer to  “the richest square mile in Africa” with the commencement of construction of its own fully enclosed regional centre, Alex Mall.

Located on N3 Highway / London Road interchange, overlooking the township and the Sandton skyline, the first phase of the Mall will provide over 30 000sqm of retail experience.

It will have more than 100 shops, taxi rank facilities and two flood-lit mini-soccer courts surrounding a 250-seater feature restaurant plus a children’s play area.

Work on the much-anticipated “Alex Mall”, officially commenced in October with the demolition and removal of existing structures on site and bulk earthworks underway since the beginning of November.

The Mall was an initiative by the Greater Alexandra Chamber of Commerce (Galxcoc) who brought in retail property developer, McCormick Property Development (MPD) and Valumax to assist in developing the Mall.

The Mall is triple-anchored by Shoprite, Pick n Pay and a Roots “Super-Butchery” plus a large Liquor City providing a veritable array of grocery options directly to the almost 180 000 residents of Alexandra.

A mix of who’s-who of the fashion trade have already signed up for space in the mall and guarantee the youthful fashionistas and hip residents of Alex complete, comparative shopping experience.

MPD’s Managing Director, Jason Mccormick notes: “With the increasing rates of unemployment within the youth in South Africa and concomitant rise of social ills such as Nyope addiction and crime amongst the youth, we are actively seeking to create social platforms to get kids off the streets and into healthy routines.”

“Having personally benefitted hugely from organised team sports in my own youth, I truly believe that getting kids off the streets and into formalised sporting structures will go a long way in not only repairing some of the social ills that are poisoning our communities, but may also help to unearth the next generation of sporting heroes who would otherwise go unnoticed due to the lack of adequate sporting facilities in these areas.” said Mccormick.

The Mall will also benchmark some of drives towards environmental sustainability, with an extensive rainwater and greywater harvesting system being installed.

Provisions are also being made for extensive rooftop solar (photo-voltaic) plants to provide up to 30% of the Mall’s power.

Furthermore, the developers are working closely with a local community cooperative to assist with the growing and maturing of all the indigenous plants, shrubs and trees to be used in the landscaping of the Mall