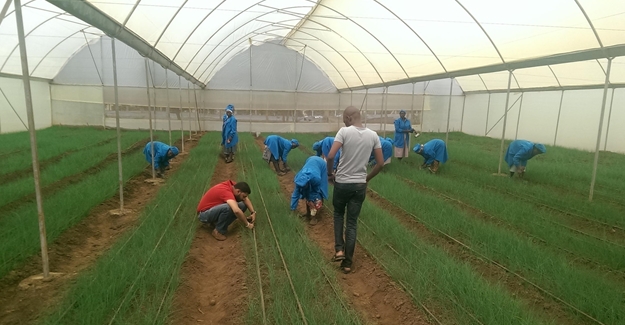 With the export market expressing insatiable appetite for their produce, more than 80 farmers from the Bahati constituency of Nakuru County are reaping the benefits of farming chives, a herb that belongs to the onion family, and earns up to Sh600 a kilo.

Through a group model, farmers have been able to own greenhouses on credit through a partnership between Premier Seeds and Chase Bank that allows farmers to repay the loan from the proceeds of chives at favourable repayment terms that are agreed upon between the financier and individual farmers. Farmers make a 10 percent deposit before the construction of the greenhouses as commitment to the project.

Premier Seeds works with the farmers through supply of the certified chives seeds, training the farmers on good agricultural practices, building their greenhouses and linking them to ready markets. “Most of the farmers have not practiced greenhouse farming before and are growing a crop that requires observance of good agricultural practices and traceability. We have therefore had to do thorough training on every aspect of farming to ensure that the farmers’ produce are compliant with the export market,” said Simon Andys the founder of Premier Seeds.

Such practices include having a tracking sheet at the entrance of each greenhouse that allows farmers to record the timing of key activities in the greenhouse including the time of spraying and irrigation. This is in keeping with the export requirements of Good Agricultural Practices (GAP).

The chives that are now enjoying fanatical uptake among the farmers takes 45 days to mature after which farmers harvest after every 20-25 days for up to three years. An ordinary greenhouse measuring 240m² produces up to 150 kilos with a kilo going for an average of Sh662. The perennial crop is easy to grow and is rarely attacked by pests and diseases which have endeared it further to the farmers.

Seeing to a need for chives

The demand for chives has been on a meteoric rise in Europe, averaging between two and four percent each year, making it the favourite across the entire basket of herbs that include coriander, basil and parsley among others. UAE countries have also expressed growing interest in Kenyan chives. The Nakuru farmers have found a buyer who they have entered into a one-year contract with. “Demand has outstripped supply. We have received so many delivery orders from the export market that we have been forced to cancel some because we cannot keep up. That is how huge the export market for chives is,” said Andys.

The group model of growing chives has been strategic in allaying fears of exporters who worry about consistency in supply from individual farmers. “Once farmers harvest their individual produce we weigh and record them. We then export in bulk to meet the heavy orders and assure the buyers of consistent supply. Payments are, however, credited to individual farmers’ accounts,” Andys added.

To farmers who are unable to raise funds for the construction of greenhouses, Premier Seeds has given them the option of growing other lucrative produce like stem broccoli, bulb onions, broad beans and beans through open field farming. The broccoli will be sold together with the chives. “These farmers are therefore able to save even as they continue with open field farming up to the point where they will have saved enough to pay for the greenhouse,” Andys added.

Such initiatives have seen Andys, become a fellow of the Tony Elumelu Entrepreneurship Programme (TEEP), a continental programme that seeks to motivate entrepreneurs creating a difference in Africa. Premier Seeds have received funding from the programme to assist farmers in ventures like farming of high-value crops.

Global market for culinary herbs and spices has been on an upward trajectory and is currently valued at approximately $ 2.3 billion with chives being among the frontrunners according to the International Trade Center with the EU forming the bulk of this market. In 2013 the EU imported some 533,000 tonnes of spices and herbs valued at € 1.9 billion with imports from developing countries like Kenya accounting for 302,000 tonnes worth € 1 billion.