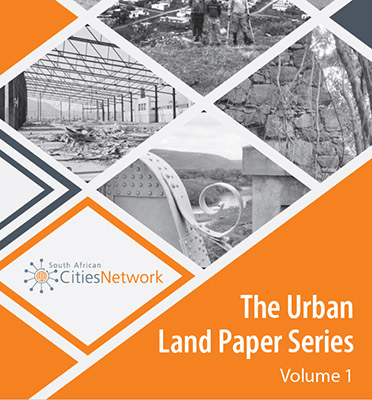 The South African Cities Network (SACN), a SANBI partner, has commissioned a series of working papers on urban land. The work began in the 2014/2015 financial year with the main objective of informing and encouraging city governments to engage in the conversation about how urban land can practically contribute toward achieving spatial transformation within cities, and translate this understanding into practice.

The working papers were intended to outline and capture a set of perspectives (be they aligned or conflicting) that will form a common basis or platform for debate and engagement. The papers were aimed at a broad audience, including policymakers, academia and the general public.

These papers were coupled with a series of dialogues aimed at stimulating the urban land debate that will contribute towards strengthening urban land perspectives and responses. The dialogues took place in the Western Cape, Eastern Cape, and KwaZulu-Natal (KZN) with the last one to be held in Gauteng at the Council for Scientific and Industrial Research (CSIR).

The South African National Biodiversity Institute (SANBI) is proud to have been a partner in the KZN dialogue. The dialogue was held under the theme “mainstreaming biodiversity and sustainability in the urban land conversation”. This session covered various but related issues on the importance of land in the context of spatial transformation and the value of land as presented in two papers written by Stacey-Leigh Joseph and Mercy Brown-Luthango. The dialogue included a panel with Dr Ray Ngcobo, Deputy City Manager, Msunduzi Municipality, and Vicky Sim from the University KwaZulu-Natal/ eThekwini Metro as respondents. They provided more insights using case studies and tacit knowledge of the KZN experiences.

The two papers did not cover biodiversity and mainstreaming issues, and this dialogue session was to address this oversight, opening up an opportunity for further dialogue and an extension of the collaboration between SANBI and the SACN. It was proposed that a follow up series of papers focusing on land, biodiversity and mainstreaming efforts should be considered when compiling volume 2 of the land series. Local government, cities in particular, were encouraged to expand this discussion, to unpack the rural versus urban dichotomy, and the drivers and balance for mainstreaming biodiversity, sustainable economy and human systems.

The final land dialogue is scheduled for the 11 November 2015 under the theme “Understanding Land Markets and Translating Policy to Practice” to be held at the CSIR.  For more information please visit theSouth African Cities Network website.