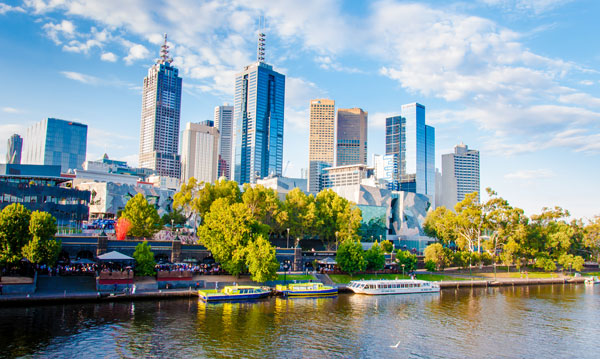 The Australian Institute of Landscape Architects’ newly appointed president Daniel Bennett aims to arm the organisation’s members with sound economic arguments for the importance of landscape in achieving liveable and sustainable cities.

Currently working as Adelaide City Council’s landscape architect and program manager for design and urban transport, Mr Bennett said now cities are back on the federal agenda, landscape architects can help shape them, from contributing to high level strategic policy discussion to the design and delivery of urban environments. Some of the trends shaping cities, such as a growing emphasis on active transport, connect directly to the work of LAs, he said. This is because in encouraging people to use footpaths and cycleways, landscape elements such as trees and places to sit are beneficial.

“The obesity epidemic is costing $50 billion a year. People are not active enough, and active transport is part of the solution,” Mr Bennett said.

Streets are also important from a city performance perspective, with green elements adding to amenity and also comfort in terms of mitigating heat.

In Adelaide, there is an emphasis on increasing tree canopy cover for this reason. He said the CBD currently has canopy cover of nine percent, and that the north west of the CBD, known as the West End, where canopy coverage is lower, gets 8-9°C hotter than a part of the city like North Adelaide where coverage is 18 per cent.

“The benefits of living streets include reducing the impacts of heat,” he said.

Understanding that cities are drivers of economic activity, and how urban planning creates the “canvas” for that activity, is also something the profession can help shape, Mr Bennett said.

“Landscaping is not something to be value engineered out of projects, it also has an economic value.”

These include trees storing carbon and mitigating greenhouse emissions, the positive impacts on “the human mindset”gained from looking at vegetation, including faster recovery times for hospital patients that reduce costs in the health care sector, and increasing the value of both commercial and residential properties.

There are ecological benefits in adding some trees to a development through increasing biodiversity, and there are jobs to be created in fostering the planting of species that have local provenance.

“With active streets, there are a whole bunch of value equations.”

He said the key thing for AILA was the advocacy process, and a focus on putting people together to ensure a more “landscape led” approach to the urban environment.

This, he said, had congruence with the Aboriginal approach to landscape. What can be learned from the original custodians, he said, was something the profession needed to have further conversations around.

Landscape architects are “reluctant engagers”, which is something Mr Bennett aims to change as AILA president. He also aims to help members better communicate with the public and clients about the benefits of landscape and green infrastructure from a value perspective.

“We need to capture thinking around these projects and communicate it to government and industry,” he said.

In South Australia, the Premier Jay Wetherill is already onboard, with statements like, “It’s the space between buildings that matters.”

Landscape architects need to be able to say to clients, “What is the cost of your development?” and then show how they will lose value by not incorporating landscape elements, he said.

“I need to arm our landscape architects across Australia to have that conversation, and help them play the economic card,” he said.

Mr Bennett said his previous roles with HASSELL and Johnson Pilton Walker, where he worked on projects including Sydney Light Rail, City of Salisbury Landscape Plan, Gallipoli Underpass, Coast to Coast Light Rail and Sydney Olympic Park, meant he could contribute data and metrics from those types of major projects that capture the various value propositions.

Green infrastructure was another major armament for the profession, he said. AILA made a submission to Infrastructure Australia’s 15 Year Infrastructure Plan for Australia in August that proposed four strategic recommendations for achieving the physical, social, economic and environmental benefits well-designed public spaces and cities have been proven to produce.

Mr Bennett said he would be part of the advocacy for a National Green Infrastructure Policy that would see green infrastructure embedded into all projects.

It is something that fits well with the work he is doing on Adelaide initiatives ranging from tramlines and parks to urban design guidelines for some of the city’s major urban renewal projects like the 6 Star Green Star Communities Tonsley innovation hub.

The South Australian Premier Jay Wetherill and city mayor Martin Haese have committed to plans for Adelaide to be the first carbon neutral city in the Southern Hemisphere.

Mr Bennett some of the initiatives around this include planning for more tram lines, integrating smart sensors and smart lights into urban areas, and creating innovation hubs that are focused on producing the next wave of smart manufacturing and technology. These were recently recognised with the inaugural Innovative Regions Award in the Australian Technologies Competition.