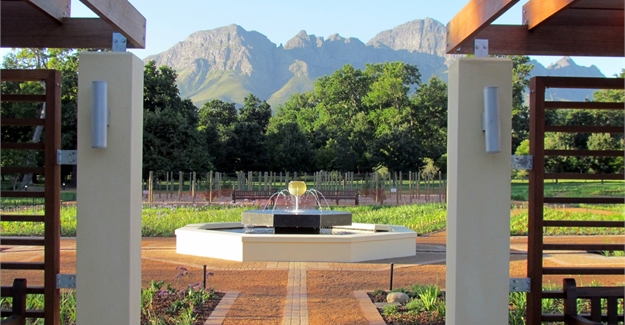 Vergelen Wine Estate is preparing for an influx of visitors who are eager to see its Agapanthus garden, arguably the largest in the country. The beds of blue, purplish and white flowers bloom from November to February.

Over 15,000 Agapanthus plants were planted within a 1,500 m² area three years ago. They now form a striking portion of the estate’s newest award-winning garden, known as the East Garden. It was established to complement the farm’s investment in a new wine centre and family-style bistro, and also incorporates a charming playground and a maze constructed from vines.

Vergelegen’s diverse gardens span 10 hectares in total, within a cultural heritage area of 60 hectares. “The Agapanthus have been planted in bands according to colour, size and flowering times (rather like tulip planting in the Netherlands),” said resident horticulturist Richard Arm. “This showcases the great variety of indigenous Agapanthus we have in South Africa.”

Agapanthus Africanus was the first Agapanthus species collected in South Africa and was described in 1679 as Hyacinthus Africanus tuberosus, flore caeruleo umbellato. The plants were exported from Africa to Europe as early as the 17th century and grown in conservatories.

Locally this popular plant is often referred to as the blue lily, isicakathi (Xhosa) and ubani (Zulu), while in Europe and America it is known as the African lily.

To view the Agapanthus:

Vergelegen opening hours are Monday-Sunday from 9.30am to 5pm (last entry 4pm). Entrance is R10 for adults and R5 for pensioners and scholars, with pensioners enjoying free entry on Mondays. The estate is closed on Christmas Day (25 Dec), Good Friday and Workers Day (1 May). Daily heritage and garden tours (one hour) depart from the Wine Tasting Centre daily at 10am, at a cost of R20/person. Garden clubs can also organise tours by arrangement. Find out more on Vergelegen or contact info@vergelegen.co.za/021 847 2100.