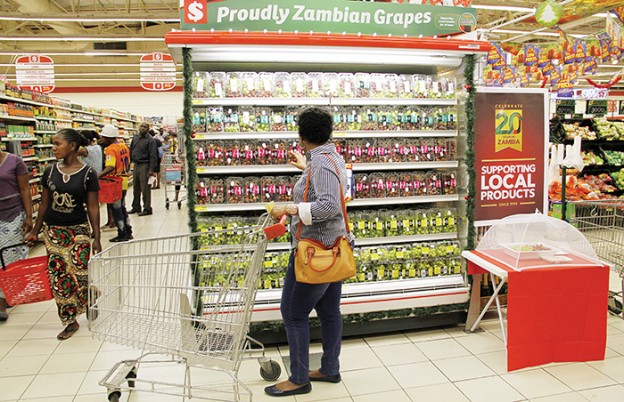 SHOPRITE says Zambians need to invest in the horticulture sector to save the country foreign exchange on imports.
Shoprite general manager, Charles Bota, said while local farmers have increased vegetable supplies, the production of fruits is still a challenge in Zambia.
Mr Bota said as a result of lack of fruit supplies, the retail giant still stocks imported apples, grapes and strawberries.
Shoprite says it is gratifying that some Zambian fruit farmers are now reliable suppliers, adding that Africa’s biggest supermarket is committed to reducing imports by supporting local produce.
Mr Bota said, although sourcing from Zambian suppliers remains a challenge because the climate and soil in the country do not favour cultivation of fruits such as apples, strawberries and grapes, some local farmers are using modern technology to commercialise production.
Mr Bota cited Khal Amazi Farm in Chongwe, which grows grapes as some of the farmers Shoprite is engaging to supply fresh fruits.
“The more difficult side, even 20 years later remains the fruits side. [However], for the last four years Shoprite has been sourcing grapes locally during the November harvesting window from Khal Amazi farm in the Chalimbana area of Chongwe ,” Mr Bota said in response to a query on Friday.
He said Khal Amazi, which sells about 200,000 kilogrammes of grapes annually, this year exported their first local fruit to Shoprite stores in South Africa, thus contributing to Zambia’s foreign exchange revenue.
Mr Bota said Shoprite is also facilitating the export of mangoes to Botswana as its commitment to promote local produce.
He said Shoprite also sources about 90 percent of its vegetables locally in a quest to support Zambian vegetable farmers.
Mr Bota said the development has been necessitated by Shoprite’s increased training of farmers on quality.
“When Shoprite opened its first store in Zambian 20 years ago, we imported almost 90 percent of the fruit and vegetables because the local farm produce supply situation could not meet retailer’s volumes and quality. Shoprite Zambia now sources almost 90 percent of its vegetables locally,” he said.