Mr. Monopoly drops by at Kirstenbosch 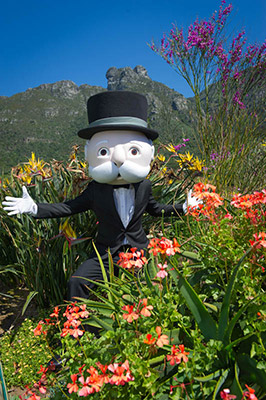 The iconic Mr Monopoly is in town and laying claim to the city’s hottest properties in the lead up to the global launch of the new Cape Town Monopoly board game at the V&A Waterfront. And one of the hotspots he recently made an appearance at is SANBI’s Kirstenbosch National Botanical Garden.

Mr Monopoly has been spotted smelling the wildflowers at Kirstenbosch, strolling along the City Walk, taking a boat to Robben Island, catching the Flying Dutchman funicular at Cape Point, savouring the breath-taking views from the revolving cabin of the Table Mountain Cableway, exploring the history at Groot Constantia and experiencing the vibrancy of the V&A Waterfront as he toured the official Cape Town Big 7 attractions.

Cape Town sites to be included on board game

Monopoly, the world’s most popular board game, celebrates its 80th anniversary this year and the new Cape Town version will include giving players around the globe the opportunity to experience the best and most thrilling aspects of the Mother City. “We are delighted to have Mr Monopoly in town and enjoyed hosting him at our iconic sites,” says Bulelwa Makalima-Ngewana, CEO of the Cape Town Partnership which facilitates the City Walk. “We are excited to see which Cape Town sites have been included on the Cape Town Monopoly board game.”

The Cape Town Big 7 is a marketing body to ensure visitors know there are seven unmissable, awesome things to do in Cape Town. The aim is to encourage visitors to extend their stay in terms of number of days and extend their range, opening up the opportunity for other sites to be visited and further boosting the flourishing tourism industry.