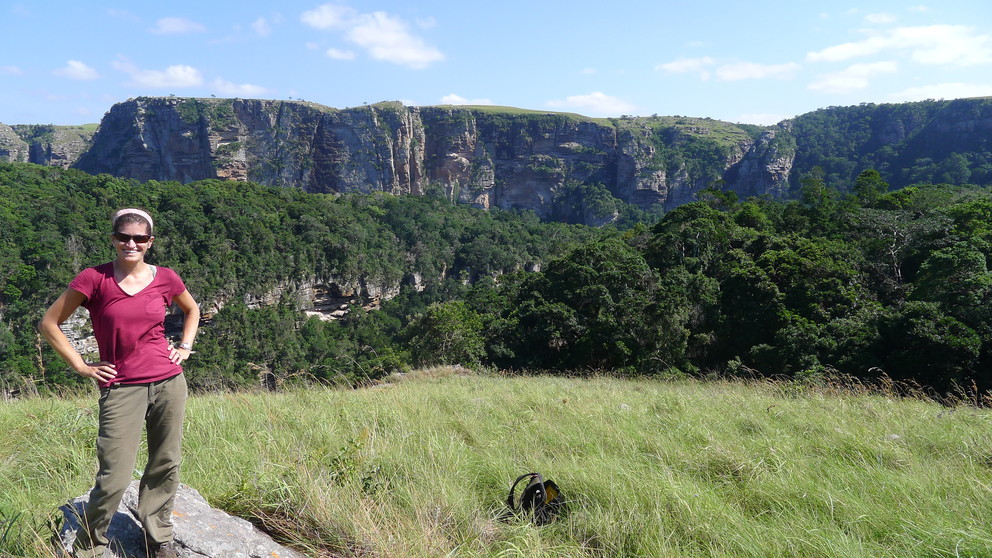 UNIVERSITY PARK, Pa. — In January 2016, Penn State associate professor of geography Erica Smithwick will have the opportunity to greatly expand the scope of the ecological research portfolio she has been building for several years in South Africa. The recipient of a prestigious Core Fulbright U.S. Scholarship, Smithwick will spend six months investigating how much carbon is stored in trees in South Africa’s Eastern Cape Province, and how that could impact global warming. She will also teach a course on sustainability at Rhodes University in Grahamstown, South Africa.

“As trees grow, they accumulate carbon naturally through photosynthesis, and it becomes a structural component of the tree. That carbon can be released back into the atmosphere as carbon dioxide, a greenhouse gas, through deforestation, tree respiration or decomposition,” said Smithwick, who is also a research associate with the Earth and Environmental Systems Institute.

Carbon accounts for approximately half of a tree’s weight, but the specific amount varies with species and size of the tree. To calculate a tree’s weight without cutting it down, ecologists use equations that use include information such as the tree’s girth and height.

“Right now, most countries in Africa don’t know how much carbon is being stored in trees, and there hasn’t been much empirical research into the coastal forest reserves in Eastern Cape Province that I’ll be studying,” said Smithwick.

Six years ago, while co-instructing an immersive, 10-week study abroad program known as Parks and People, Smithwick worked with community members in South Africa to establish plots of trees and collect baseline measurements of the trees’ sizes. Now, with assistance from her Fulbright award, she will return to those plots in January to measure growth. In addition, she intends to expand the scope of this research by measuring more trees in other areas of the Eastern Cape Province. Smithwick will use this data collected to extrapolate the total carbon stored in the Eastern Cape Province.

Research like Smithwick’s is crucial as countries around the world assess their potential greenhouse gas emissions from deforestation and forest degradation, and design mitigation strategies to reduce emissions. South Africa plans to reduce greenhouse gas emissions by 34 percent by 2020, and 42 percent by 2025, to align with the United Nations’ Framework Convention on Climate Change.

“Many countries already know the amount of greenhouse gases they are emitting from fossil fuel emissions, so if they can store more of these greenhouse gases in forests, it could help them to meet emissions regulations,” Smithwick said.

The forest reserves Smithwick is researching also have significant biodiversity and cultural value.

“The forest belt I’m studying isn’t large, but it is important. We’ll be working with community members to better understand the traditional uses of the forest, such as what plants are used for medicinal purposes. We also will study the biodiversity of the forests, as past research has shown that species diversity correlates with forest resilience to climate-change-related stressors,” she said.

Smithwick will teach a botany class at Rhodes University on landscape ecology and climate change. In the course, she plans to teach digital storytelling and video development techniques, and involve Penn State students participating in the Department of Geography’s annual Parks and People Program on her project.

Spending six months in South Africa will allow Smithwick the opportunity to build stronger connections with researchers from numerous institutions — such as Eastern Cape Parks & Tourism Agency, the University of Cape Town, the Council for Scientific and Industrial Research and the Wild Coast Living Laboratory. She will be investigating the potential for long-term ecological partnerships related to additional topics such as how the increase of woody plants in grasslands affects biodiversity and species resiliency, and the effect of grazing animals on grass productivity and nutrient cycling.

“I’d like to think that the best we can do in South Africa is yet to come. It has taken time to build the relationships we have with various communities, and Penn State as an institution can really make a difference in those communities by building these partnerships,” she said.