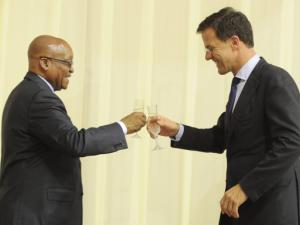 Pretoria – President Jacob Zuma on Tuesday absolved the Dutch of responsibility for South Africa’s ills – despite his remark earlier this year that “Jan van Riebeeck’s arrival in Cape Town was the beginning of all South Africa’s problems”.

Van Riebeeck, representing the Dutch East India Company, arrived at the Cape of Good Hope in 1652 and established the first European settlement in what was later to become South Africa.

Zuma was asked, at a joint press conference on Tuesday with visiting Dutch Prime Minister Marc Rutte, whether his remarks about Van Riebeeck meant that Rutte was also responsible for South Africa’s problems. Both Zuma and Rutte laughed when asked questions about Van Riebeeck by a Dutch reporter.

“Not at all. We are not saying either of them must take responsibility. It’s a fact of history … when Jan van Riebeeck arrived here that changed the situation in the manner in which we were living as people in this country,” Zuma said.

“Firstly he arrived as a friend needing help and needing co-operation. Once he established himself he began to fight the indigenous people and that was what I was referring to.”

Zuma also noted that the architect of apartheid Hendrik Verwoerd, had been born in the Netherlands. But he had later become a South African citizen so the Dutch could not be blamed for his wrongs.

And the Netherlands had become a centre in fighting the system, he said. “Amsterdam became the hub of the anti-apartheid movement… We fondly recall the 20,000 people in Amsterdam who welcomed our founding President Mr Nelson Mandela four months after his release from prison, demonstrating their love for Madiba and their support for a free South Africa.”

Since 1994 South Africa and the Netherlands had forged a solid partnership that covered many fields, including the economy, education, agriculture, trade, science and technology, judiciary, culture and multilateral cooperation.

He noted that the foreign ministers of the two countries would sign an agreement at The Hague on Thursday to establish a Joint Commission which would guide and coordinate relations, taking them to a higher level.

On Tuesday, ministers from both sides signed agreements in the presence of Zuma and Rutte to increase cooperation in agriculture, science and technology.

Zuma said the Netherlands was particularly interesting to South Africa as a trade and investment partner. Total trade between them had increased from R27 billion in 2010 to R48 billion in 2014. The Dutch had also invested over R15 billion between 2003 and 2015 in about 40 projects, in financial services, aerospace, transport, business services and IT.

And he said he and Rutte had discussed even more investment opportunities, especially in South Africa’s ocean economy and in energy.

“The message we want to give our Dutch partners is simple and clear: South Africa is open for business.”

Rutte said that the two countries had a “long and mature” relationship, and that the Netherlands had stood by South Africa in its long struggle against apartheid.

Since then it was sharing its knowledge and expertise to help South Africa find sustainable solutions to its economic problems.

And the Netherlands wanted to take this further.

Rutte noted that more than 70 Dutch companies had accompanied him on his visit to South Africa, the largest trade delegation from the Netherlands ever to visit Africa.

These companies covered a large field, including water management. He noted that the Dutch were helping countries with too much water like Bangladesh but also those with too little water or which faced problems with water quality (like South Africa).

He hoped to extend the economic partnership in fields such as horticulture, agriculture, science and technology and even film-making.

Rutte was later to visit the House of the Future exhibition in Johannesburg which showcases innovative partnerships between the two countries.

He was due to stay on in South Africa on Wednesday for other meetings and visits, including one to Cape Town, but cut the visit short to return home because of the security crisis in Europe sparked by the terror attacks in Paris on Friday.

His Agriculture Minister Martijn van Dam, will continue his programme.