Catalytic Action designed and built a playground for refugee children 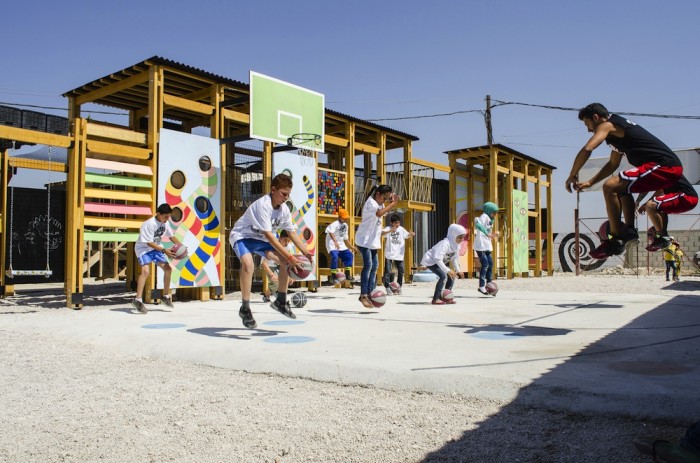 Using input from children in Bar Elias, Lebanon, Catalytic Action designed and built a playground for a school developed to serve refugees.

London-based, non-profit design studio Catalytic Action has designed and built a playground for the Nahreya School in Bar Elias, Lebanon. The school was developed to cater to children who have fled their home country of Syria.

The team of architects at Catalytic Action designed the playground with the input of the children themselves. The studio engaged with the Syrian refugee children of the Nahreya School through a series of participatory exercises that were aimed at understanding their playing practices and play spaces. The children communicated their desires and requirements through brainstorming, collages and drawing

The children suggested swings, slides, balls, seesaws, jump ropes and elastic cords. “The environment that was most recurrent among the children’s ideas was a green space with flowers and trees; a place where they can play with their friends and relax,” says Catalytic Action. “The sun was shining in their images even though sometimes clouds are depicted.”

The Catalytic Action design team are advocating for a design that questions the definition of a playground in emergency situations. The innovation lies in the participatory and democratic design rather than just providing slides, swings and a basketball hoop

The playground was constructed in August with the combined efforts of local and international volunteers. The children who attend the Nahreya School were a part of the construction and design process together with the volunteers; they were particularly involved in adding the finishing touches.

The playground is designed using a modular wood structure that is easy to assemble, disassemble, transport and then either re-assemble or re-purpose.