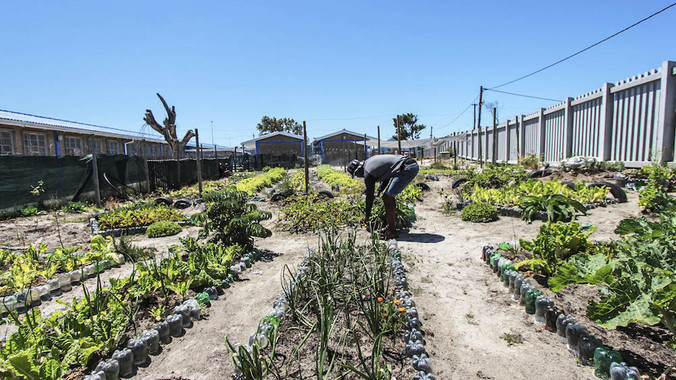 On a sunny morning, the Vuzamanzi Primary School in Khayelitsha is bursting with the voices of schoolchildren shouting loudly, running and playing. It’s the start of the day, and the children have eaten the usual breakfast provided by the school’s feeding scheme – mealie pap.

But at a small patch of farmed land at the school, a group of young people are trying to encourage the schoolchildren to eat healthier food.

“The feeding scheme now is [providing] food that does not have nutrients,” says Sizwe Nyuke (24), a small-scale farmer.

“If they keep eating the food that doesn’t have nutrients, it affects the way they think. They fall asleep in the class and don’t have energy because of the food they eat.”

Nyuke and his childhood friends, Abonga Tom (22) and Lonwabo Mfenguza (21), launched Ekasi Project Green in September last year. The project aims to spread small-scale farming throughout the township so that residents can afford to eat healthily and become self-reliant.

Nyuke, who hails from the Eastern Cape, says his grandmother inspired the project. “[She] lived in the Eastern Cape on the farms. They had their own cows. Everything was sustainable. Now, we depend on buying food from the supermarket and most of the people here don’t have much money.”

When they began the project, Nyuke and his teammates knew nothing about farming. It was with the help of workshops and local farming organisations, such as Ikhaya Garden, an urban farming initiative in Khayelitsha, and Abalimi Bezekhaya, an agricultural nonprofit organisation, that they learned the science of farming.

With a R10 000 donation from the National Youth Development Agency, the group bought spades, seeds and other equipment to start their vegetable garden. They chose the Vuzamanzi Primary School, because it’s a community school where they can reach out to pupils.

“Gardening is something new here,” Nyuke says. “Young people don’t know; they think spinach comes from the shops. They don’t believe they can actually take a seed and put it into the soil.”

It took hard work and patience, but the garden now produces onions, lettuce, spinach, potatoes and beetroot, which are given to the surrounding community for free.

The sandy soil made it difficult at first to grow crops, because it had few nutrients and dried out fast. But with a generous amount of compost and manure, the three friends slowly transformed the soil.

The challenge now is finding ways to get children interested.

“We try to be creative … because we see gardening as a form of art and design,” Nyuke says. “Our main focus is young people, so, if we use the same old style old people have been using, they’re not interested.”

The vegetable beds are a jigsaw of geometric shapes, bordered by rows of upturned plastic cool-drink bottles recovered from the streets: islands of spinach grow in circles, lettuce grows in triangles and potatoes in rectangles.

Mfenguza says that the geometric shapes link what the pupils learn in maths in the classroom with the gardening they do outside.

“With the design of the garden, we try to create some shapes so that the young children, when they come to the garden, will enjoy it.”

So far, about seven students have volunteered to work in the garden. Occasionally, teachers tell their pupils to collect samples from the garden for their nature classes.

Ekasi Project Green doesn’t just want to limit their learning to the classroom; they want to broaden how people think about food in South Africa.

“The food system is not fair on small-scale farmers. Corporates control the food: they decide what you’re going to be eating; you don’t have a choice,” Nyuke says. “You have to go to the supermarket and then you’re going to buy what they have there.”

Already, the group is trying to promote local farming by providing food from the garden for the school’s kitchen, cutting out outside suppliers. Nyuke hopes they will be the “pioneers of organic food here in Khayelitsha” so that people in the township don’t have to worry about not being able to afford the high cost of organic food in supermarkets.

Nyuke and Tom are currently completing an internship at the Surplus People’s Project, which assists rural farmers in the Western Cape. The money they earn there goes towards financing the garden, which they hope will lead to a Khayelitsha where communal food gardens are grown in all public spaces.

“This is just the stepping stone for other people. We want the young kids to take this project forward so they can give it to the next generation. We want to have food gardens at clinics, libraries, everywhere in public spaces,” Nyuke says.