How art won over politics 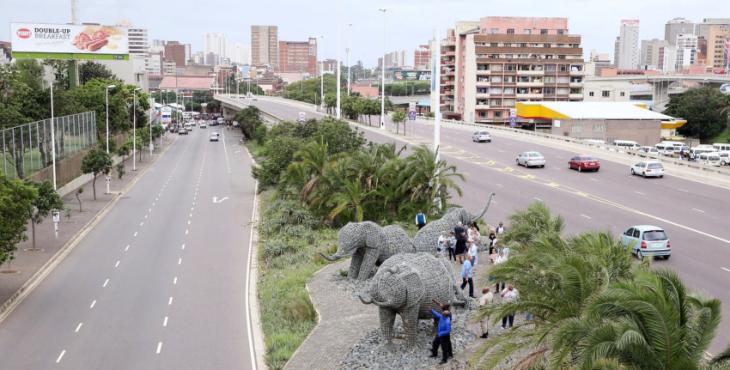 Durban – It has been a long and arduous struggle for Andries Botha’s elephant sculptures, one that symbolises the triumph of art and creativity over political tunnel vision, providing an opportunity for unity and reconciliation.

These were the words of John Charter, chief executive of the Human Elephant Foundation. He shared them on Sunday at the symbolic launch of the stone and steel elephants, an “eco-human metaphor”, standing alongside the western freeway, in the Durban CBD.

The sculptures were commissioned by the eThekwini Municipality in 2009 for the Soccer World Cup, but were canned in 2010, three weeks before completion.

This was after the late ANC eThekwini head, John Mchunu, expressed his displeasure at the elephants resembling the logo of the IFP.

The municipality then decided that two of the three elephants would be taken down and one remain as part of a Big Five concept, which Botha refused because it would alter the “core conceptual meaning of the work”.

On Sunday, Botha thanked those in the municipality who had handled the situation “professionally” and who had been “personally supportive” of the “principle”.

He also expressed his gratitude to individuals who had taken on the cause. In November 2010, an electronic petition was established to halt the sculpture’s destruction.

He also thanked the legal fraternity who had stepped in to “defend the attack on and unravelling of constitutional principles”.

Botha had filed three applications in the Durban High Court on the matter.

His main application was aimed at reviewing and setting aside the “unconstitutional political decision” to pull the plug on the installation of the sculpture.

A decision was reached out of court in 2013 that the R1.6 million project would continue with the addition of a fourth elephant. Meanwhile, the sculptures had been vandalised to a point where they had to be rebuilt last year.

The elephants would be handed over to the city’s Libraries and Heritage Department and join a herd of about 30 installations in cities around the world, including Chicago, Mexico City and The Hague.

Charter said there was talk of a herd in Trafalgar Square, in London.

“The organisation’s key purpose is to use public space art as a means to harness human imagination and creativity in order to bring about conversations about solutions to the massive threats to the planet which we as a species have brought about,” he said.

The elephant – the largest land mammal – had been chosen as the instantly recognisable “quintessential” symbol of Africa, closely related to many other cultures and religions the world over.

The spot was significant as it was near where the last of the Durban elephants had been killed at the turn of the century, said Charter.

He saluted Botha, who established the foundation almost 10 years ago, for his “dogged commitment to this very challenging project. Throughout the difficult and dark times he never lost faith in the important principle of freedom of creativity and art in general”.