Plant of the week; Sterculia alexandri 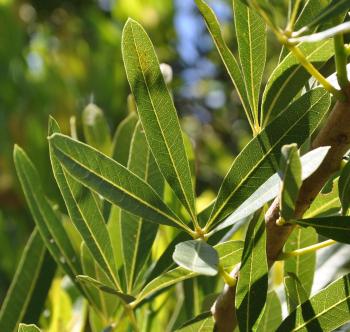 Sterculia alexandri is a medium-sized, thickset tree with compound leaves and yellow flowers. It is endemic to the Eastern Cape, west of Port Elizabeth, where it grows in dry, thicket among sandstone rocks and is well-suited for small to medium-sized gardens or large containers.

A branched tree, sometimes with a single stem up to 500 mm in diameter and 3 to 8 m tall, often multi-stemmed from a succulent base. Bark silvery grey and beset with raised tubercles. Roots radiating and succulent. Leaves are digitately compound, with up to 7 leaflets radiating from a point like a star, borne on the ends of the stems with a yellow stalk; the leaflets are oblong, finger-like, up to 130 mm long and 20–25 mm broad, ending in a stiff point, leathery, initially reddish, soon turning bluish green. Flowers are born in sprays (compound cymes), 5–7 lobed, pale yellow to creamy green, often with reddish markings in the centre. The flowers hang downwards. Flowering at any time of the year but at Kirstenbosch National Botanical Garden, mainly in winter. Male and female flowers are separate and are borne on the same tree. The fruit consists of a compound pod with 1–5 boat-shaped, woody, horned or knobbly lobes, each up to 80 mm long, splitting down the inner side to release 4–8 large, oval seeds.

Sterculia alexandri is a rare tree with a small natural range, however it is locally common and not threatened. It is Red Listed as Rare (Victor et al. 2009).

What makes this species noteworthy is its distribution, it is the sole member of the genus Sterculia that falls within the Cape Floristic Region. This is thus the furthest south of any of Africa’s Sterculia species; all the other African sterculias grow in hot, dry savanna to the north. Sterculia alexandri is only known from a few records, growing from the Kouga River at the Kouga Dam, to the Van Stadens Mountains in the east. It is usually confined to steep, sandstone, rocky slopes, growing in Gamtoos Thicket (Mucina et al. 2006). This small tree has a thickset stem base and succulent roots, which enables the plant to grow in its hot, dry, rocky environment. These trees grows scattered on steep slopes and kloofs in slightly acidic soil in full sun. They share their habitat with other thicket plants such as Carissa bispinosa, Azima tetracantha,Crassula ovata, C. perforata and C. rupestris, Rhoicissus kougabergensis, Portulacaria afra, Plectranthus madagascariensis,P. spicatus and P. verticillatus and Euporbia polygona. The climate is hot in summer, with frost in winter, although very light if it occurs. Rainfall in the region is about 300–400 mm per annum, and in summer and winter, but with a tendency to winter dryness.

The genus name, Sterculia, is from Sterculius, the Roman god of cultivation and manuring, and privies. The name is derived from the Latin stercus meaning ‘dung’ alluding to the flowers and leaves of some species that have an unpleasant smell. This species was discovered in a narrow valley near Uitenhage in the Van Stadens Mountains in 1848 by Dr Richard Chandler Prior (1809-1902), an English medical doctor and amateur botanist. He was born Richard Alexander and changed his surname to Prior in 1859. In 1846 he spent 13 months in Cape Town and travelled to George and Uitenhage in 1847, where he collected many plant specimens including Sterculia alexandri. He also travelled in the Karoo and returned to England in May 1848. This species is named in his honour.

It is not known what pollinates the yellow flowers, but it is probably a beetle. Plants flower at any time of the year however at Kirstenbosch we observed flowers during winter.  The fruits presumably ripen in summer and are relished by vervet monkeys and chacma baboons.

The large oval seeds are edible, Eve Palmer in Trees of southern Africa, describes the flavour as ‘sweet and nutty’. They are a favourite of baboons and with children.

The Cape Star-chestnut is a beautiful, small, ornamental tree and of horticultural interest because of the thickset, succulent stem with silvery bark. It can also be sprawling with twisted trunks, and it suckers and coppices readily. It grows fairly fast and is best for dry thicket or savanna gardens (Van Jaarsveld 2010). Because of the succulent roots, it is best to grow it away from paths and buildings where it can do no damage. It grows in full sun, but will tolerate light shade. It is easily propagated by both seeds and semi-hardwood cuttings. Plants prefer a soil that is well-drained and slightly acidic. In spite of the heavy winter rain at Kirstenbosch, they do well in the garden, although a plant that grew for years adjacent to the Camphor Avenue was ripped apart by gale-force winds during the winter storms of 2015.

Sterculia alexandri seed should be sown preferably fresh during the warmer months, in a shady position. Sow in seed trays in sandy soil which drains well. According to Palmer & Pittman (1972), seed is best placed on top of the soil, and kept moist but not wet. Protect from rats and mice. Once germinated the root forms a little tuber from which the tap root grows. Germination is presumably within three weeks. Seedlings grow slowly and are best planted out when large enough to handle. Propagation from stem cuttings is best undertaken in spring and summer. Cuttings of about 150–300 mm long, are ideal, grow them in sand or in a mixture of peat and polystyrene. Keep moist and rooting is usually after about four to six weeks. Once rooted, they can be planted in individual containers and grown on until well established. Young plants grow rapidly and are best fed with an organic fertilizer (compost or any other liquid fertilizer). In winter the plants are at rest, and watering should be stopped.