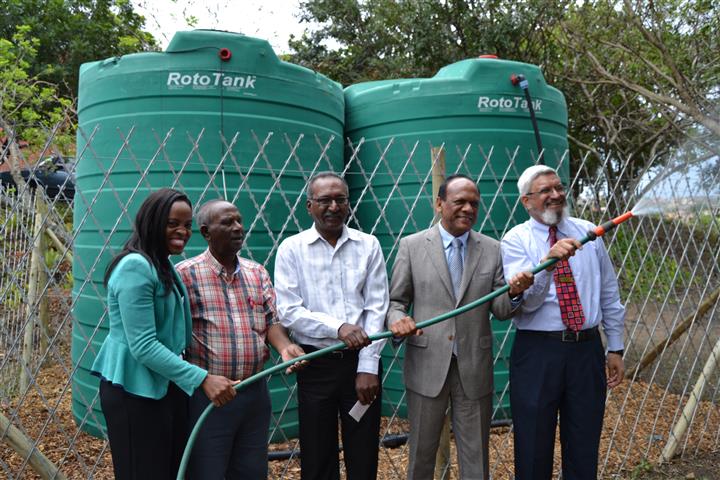 The borehole was made possible through the generous efforts of businessman and philanthropist, Vivian Reddy through the Sibaya Community Trust.

While KZN is facing the worst drought since 1982, a Newlands secondary school has beaten the dry season with the sinking of a borehole on the property. The borehole was made possible through the generous efforts of businessman and philanthropist, Vivian Reddy through the Sibaya Community Trust.

The organisation sponsored the borehole that will provide 10, 000 litres an hour of water to New West Secondary School’s organic farm garden. Project manager and school teacher, Inba Naidoo, said that the trust’s assistance came in the nick of time.

“Our school farm garden provides vegetables and to several indigent families in the region and was at risk due to exorbitant water costs. We were finding it difficult to meet our irrigation bills. Plus, with the serious water shortages in in KZN, we were concerned that we would soon be in serious trouble. But then, the trust came to our rescue,” explained Naidoo.

Water from the borehole will also be directed to school ablution facilities and be used for washing and flushing of toilets. Naidoo said the garden was legacy project from COP 17 and was started in 2011.

“We have a garden of between 2000 and 3000 sqm and can provide a decent living for three to four families. Our New West garden sustains itself completely paying for labour and providing us with a profit. He added that profits derived from the sales to local hawkers and chain stores, had also been put into other endeavours. This included a project replacing all alien species at the school with indigenous plants,” Inba added.

Director of the trust, Reddy, said, “We all recognise the fact that the country is going through a water crisis – with KZN particularly badly affected. Water rationing has commenced in many towns along the North and South coast and is soon expected to come to Durban. The sinking of a borehole was therefore imperative and we wasted little time in ensuring that this became a reality.”

Speaking about the organic garden, Reddy said, “The New West farm garden is indeed an example of in our community and we are proud to be aligned to it. Poverty is a serious concern in South Africa and we are grateful that there are organisations out there that strive to combat it.” Other organisations such as the Rotary Club of Reservoir Hills also assisted in the project. If you would like further information or would like to get involved, call Inba Naidoo on 083-231-0562 or naidoo.inba@gmail.com