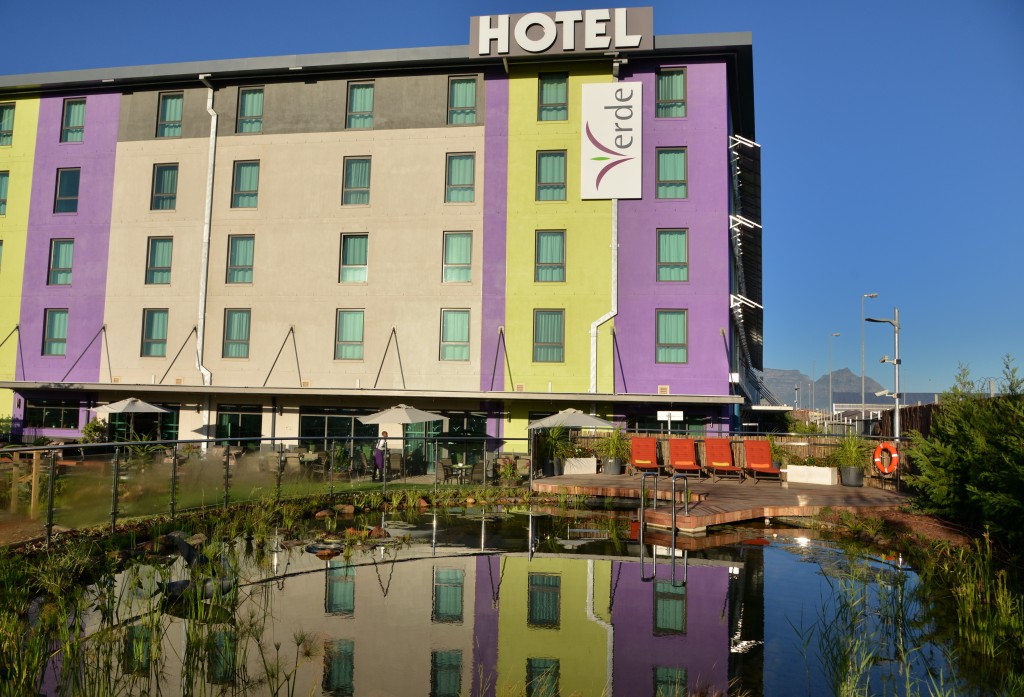 Hotel Verde was built by owners Mario and Annemarie Delicio, whose vision and commitment are behind the design of Africa’s greenest hotel. They tasked a team of experts with finding innovative design solutions to make the hotel environmentally friendly.

Every aspect of Hotel Verde is designed to be as sustainable as possible, literally from below the ground up. With help from Ecolution, our sustainable consultants, the hotel has implemented a range of systems that yield significant water and energy savings, as well as reducing waste. These systems have helped Hotel Verde spearhead the growing trend of sustainable tourism in Africa.

Hotel Verde is proud to have won the following awards:

Below we provide basic information about some of the design features and systems that contribute to Hotel Verde’s eco-friendly status.

Used bath and shower water from the hotel is channelled to our Pontos grey water plant, where it is biologically filtered and sterilised so it can be used again to flush toilets. The water proceeds through various stages of cleansing. Natural bacteria break down particles in the water, such as hair or skin cells. UV light is then used to sterilize the water. No harmful chemicals are used during the process. The result is water that’s colourless and odourless, and perfectly suited for toilet flushing or car washing.

In line with our drive to use less water, there are only eight rooms with bathtubs in the hotel. All rain water is collected in our 40 000 litre tank, located in the basement. Due to the low amounts of summer rainfall in the Western Cape, the water collection is boosted through the use of subsoil drainage water. Buildings that are underground, such as our basement, usually pump water away to ensure they don’t flood. We perform the same function but collect the water into our water tank and reuse it around the property to meet external water requirements.

Unlike a conventional pool, an eco pool functions as a living eco-system. The pool’s outer perimeter serves as a filtering system, consisting of living plants and organisms. The plants and organisms consume all the nutrients in the water, thereby cleaning it and preventing the growth of algae.

The flat concrete roof over the reception and lobby area is covered by a vegetated roof garden. In addition to being aesthetically pleasing, the vegetation creates a habitat for birdlife, encourages biodiversity and thermally cools the areas below through insulation and absorption.

Our living wall is a striking and beautiful feature of Hotel Verde. It’s also functional in that it helps clean the interior air.

Water for the plants in our living wall is provided by drip irrigation. The water then runs into a drain aesthetically covered by natural stones. The wall receives sunlight from skylights on one side and light from LED grow lamps on the other side. Unlike conventional grow lamps, the LED lamps provide all of the needed light frequencies without losing energy through heat. The lamps are on a timer to mimic daytime hours.

Hotel Verde has three wind turbines, which produce renewable energy for the hotel. Although the payback period on the turbines is quite long, we believe they are a landmark feature for the hotel and a statement towards our belief that wind power is one solution to the world’s energy problems.

Photovoltaic (PV) panels are located on the north façade of the building and on the roof. At maximum output, the PV panels produce 54 kWh. This energy is used first to charge our UPS battery. Remaining energy is channelled to essential appliances and hardware. Any excess goes to wherever it’s needed within the hotel, to offset power from the grid. The 220 PV panels collectively provide about 78 000 kWh/year.

The panels are cleverly positioned to assist with shading the windows, while also being in the optimum positions to receive maximum sunlight. The inverter for our PV panel array can show us how much energy we are receiving and where the generated electricity is being allocated.

The plant room is the heart of the hotel, facilitating many further green building features. The hot and cold water systems feature extremely effective insulation, to ensure that minimal energy is lost. Hot water is circulated throughout the hotel constantly to ensure that guests have hot water as soon as they open their taps. This isn’t only a convenience feature, but a water saving feature too. It means that no running water is wasted while guests wait for the water to heat up.

A geothermal field coupled to ground-source heat pumps has been installed to bypass the need for standard air-conditioning systems, which traditionally are one of the biggest energy consumers in a building. The geothermal field was made by drilling 100 holes, each about 65 metres deep, into the ground. A complex network of piping, 13 kilometres in length, along with equipment specially designed for Hotel Verde, uses the earth as a heat source in winter and a “heat sink” in summer, boosting efficiency and dramatically reducing operational costs.

Energy-efficient LEDs are used for lighting throughout the hotel, and a number of controls help reduce the energy they consume. All public areas have motion sensors that activate the lights. If there’s no further motion, the lights switch off after a timed period of about 15 minutes. The hotel also uses light level sensors, which measure the amount of light that’s available – including natural light from windows and skylights – and dims or brightens the output of the lights to ensure that only the required amount of light is given out at any time.

The streetlamps outside the hotel also use sensors effectively. Once it gets dark, the lights automatically come on at 50% of their strength, providing security and safety lighting around the hotel’s perimeter. The lights brighten to their full potential only when a motion sensor detects movement nearby.

Hotel Verde uses three energy-efficient Kone elevators. These elevators are fitted with regenerative drives, allowing for about 30% of the input energy to be recaptured and fed back into the building. Whenever an elevator travels in the “light” direction – that is, when a full cart is going down or an empty cart is going up – the motor acts as a generator and produces power.