Astronauts are growing zinnias in space 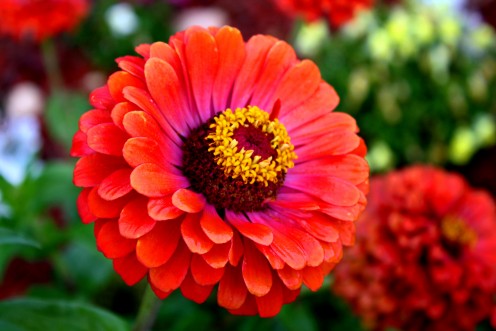 NASA astronauts are growing zinnias on the International Space Station (ISS).
On 16 January, Expedition 46 Commander Scott Kelly shared photographs of a blooming zinnia flower in the Veggie plant growth system aboard the ISS.
Kelly wrote: “Yes, there are other life forms in space! #SpaceFlower #YearInSpace”.
This flowering crop experiment began on 16 November, when NASA astronaut Kjell Lindgren activated the Veggie system and its rooting “pillows” containing zinnia seeds.
The challenging process of growing the zinnias provided an exceptional opportunity for scientists back on Earth to better understand how plants grow in microgravity, and for astronauts to practice doing what they’ll be tasked with on a deep space mission: autonomous gardening.
In late December, Kelly found that the plants “weren’t looking too good”, and told the ground team, “You know, I think if we’re going to Mars, and we were growing stuff, we would be responsible for deciding when the stuff needed water. Kind of like in my backyard, I look at it and say ‘Oh, maybe I should water the grass today’. I think this is how this should be handled.”
The Veggie team on Earth created what was dubbed “The Zinnia Care Guide for the On-Orbit Gardener”, and gave basic guidelines for care while putting judgment capabilities into the hands of the astronaut who had the plants right in front of him. Rather than pages and pages of detailed procedures that most science operations follow, the care guide was a one-page, streamlined resource to support Kelly as an autonomous gardener. Soon, the flowers were on the rebound and, on 12 January, pictures showed the first peeks of petals beginning to sprout on a few buds.
The zinnia – sometimes called Jakob Regop in South Africa – is a daisy-like annual that usually thrives in hot and dry conditions, in full sun. The plants are native to South America but thrive throughout the world.