“In five years, two thirds of inspection will be digital” 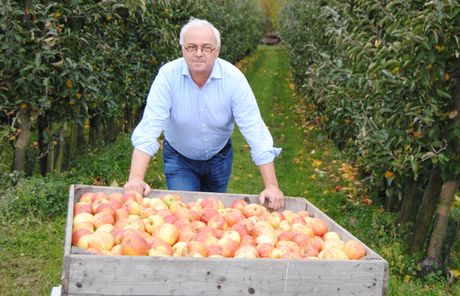 As of three years ago, Guy Callebaut has been chairman of GlobalGAP. The Belgian native earned his stripes in the cultivation of fruit, and is known as a board member of BelÒrta and VBT, the Association of Belgian Horticulture Cooperatives. He talks about the certificate and GlobalGAP’s ambitions.

Are there still many growers that aren’t certified?
“Of Belgium, the Netherlands and Germany, we know that only twenty percent of the professional growers aren’t certified. Those are mainly growers who sell locally, or growers that only supply to industry. Of the growers that sell through BelÒrta, 100% of professional growers have the GlobalGAP certificate. The large retailers demand the certificate, so without it you can’t sell produce. The FAO estimates that globally, there are 500 million family agricultural companies, of which 150,000 are GlobalGAP certified.”
And how is that in Africa, for instance?
“In Kenya, we have 5,000 small growers of green beans, all of which are certified. Those are growers with a very small acreage, but they are clustered in cooperatives. Those organizations supply seeds, fertilizers, and help with sales and administration. For the growers in developing countries, we have a special rate of ten cents per 0.1 hectares, and that works perfectly.”

Guy Callebaut (GlobalGAP) and Leon Mol (Ahold) during a press conference at the Fruit Logistica.
But there is also LocalGAP, what exactly is that?
“It started in South Africa, where retailers want to bring their smaller suppliers to a higher level of food safety and sustainability. LocalGAP is actually stepping stone to GlobalGAP. Incidentally, we see in many countries in Africa that growers skip this step and go directly for GlobalGAP.”
Can a European retailer also work with LocalGAP?
“Yes, in Bulgaria BILA has a LocalGAP project with a number of suppliers. The country doesn’t matter. The system is open to everyone. In addition, we try to connect with the local government initiatives, such as ChinaGAP. The Chinese government is often a very limiting factor though. The request for certification usually comes from Western retailers who become active in China.”

How is digitization seen in the inspection process?
“We are working towards a system in which a large part of the inspection occurs digitally. In five years, the idea is for two thirds of the inspection to be done digitally, and only a third on location. Companies already have a lot of data available digitally, so we want to use that data. Already, application of fertilizers or crop protection agents is mostly recorded digitally.”
How does the future look for GlobalGAP?
“Avoiding duplication is one of our most important goals. Standards for food safety and sustainability overlap at least eighty percent. Benchmarking, mutual recognition of equivalence, is a means to avoid duplication. We talk to anyone who wants to see how we can limit the inspection costs for the producer, and make less use of his valuable time.

“We have also just introduced the GlobalGAP standard for processed fruit and vegetables, in conjunction with SAI Platform. Many retailers are saying: ‘if we’re holding fresh products to standards regarding sustainability, then why not for the processed products: cooked, frozen, freshly cut or pressed?’ The emphasis of this standard will mainly be on sustainability, because many of the food safety elements are excluded during the transformation process. The major processors have production units and thus also suppliers in various countries. GlobalGAP gives them the opportunity to certify all their suppliers in a uniform manner.”
Article Source