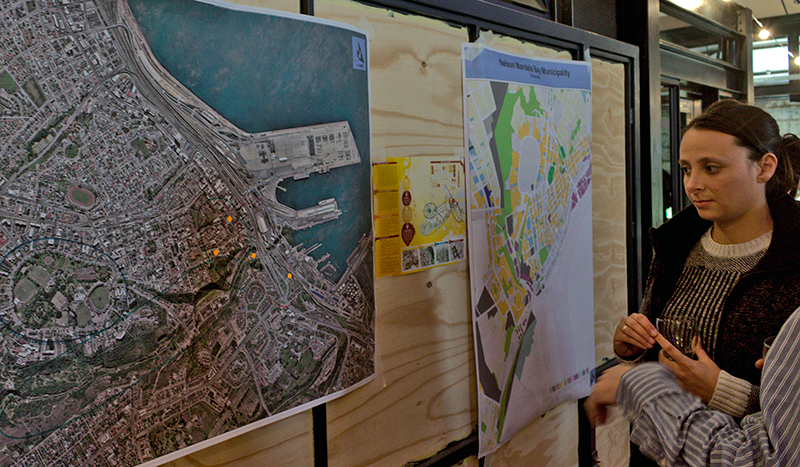 On the periphery of the central business district in Port Elizabeth, a coastal city in the Eastern Cape Province of South Africa known as the Friendly City, is, for lack of a better term, a disconnected urban space. Outside an entrance to the city’s busy port, a dour overpass crosses the Baakens River, which is clogged with rubble and vegetation. Across the street, the century-old Tramways Building exhibits a freshly painted and renovated red facade that breathes life into the scene.

The restored Tramways Building signals the start of proposed development in the area, a prime location because of its proximity to the port and city center. The building is the headquarters of the Mandela Bay Development Agency, a municipal company that steers urban regeneration in the Nelson Mandela Bay Municipality, which includes Port Elizabeth and the nearby towns of Despatch and Uitenhage.

City officials hope to catalyze development in the urban space surrounding the river and port, as well as other parts of the Baakens Valley Precinct, a 300-acre (120 ha) site encompassing land in and around the lush valley that flanks the river and creates a green spine through the city, including  a retail hub with office space and affordable housing developments. The ULI panel recommended upgrading the space around the Baakens River (shown here) between the Tramways building, which houses the offices of the Mandela Bay Development Agency, and the port. Suggestions include making the road pedestrian-friendly, clearing rubble from the river, and additional lighting. (Photos by Brendon Bosworth for ULI)

The project dovetails with plans to upgrade the port, a major point for the export of cars made in the automobile manufacturing center Uitenhage, and create a multiuse marina featuring a new shipping terminal dedicated to the export of cars, and possibly retail and leisure infrastructure.

The plans  “will turn the city around,” says Dawn McCarthy, the municipality’s senior director for strategic planning and coordination in the office of the chief operating officer. “It’s important that we get this right.” McCarthy was speaking at the opening briefing for a World Bank–sponsored ULI Advisory Services panel convened in Port Elizabeth in the first week of November to advise the municipality on a way forward for developing the Baakens Valley precinct. The ULI panel was made up of international experts with specialties ranging from  public/private partnerships to landscape design and sustainable development. This is one of several panels cosponsored by the World Bank in South Africa.

Port Elizabeth has the feel of a city in need of activation, which is why it is sometimes labeled the “ghost on the coast.” It has a wealth of natural assets, such as the nearby Addo Elephant National Park and beautiful beaches that hug its southern suburbs, as well as the port and proximity to South Africa’s largest industrial development zone.

However, it is perceived as living up to its potential. Port Elizabeth has an unemployment rate of 36 percent, higher than the national average of about 25 percent, and one-third of the population is inadequately housed, making it an imperative to capitalize on any opportunity to improve the jobs and housing situation. Poor governance has marred the city’s progress and helped alienate the business community. Earlier this year, new mayor Danny Jordaan took office and suspended 17 city councilors on charges of fraud and corruption.

The ULI panelists spent five days in Port Elizabeth, touring neighborhoods and proposed development sites. They interviewed about 75 stakeholders, including representatives of the local port authority Transnet, community members, developers, and city officials. By the end of the week, they had a clear message for the municipality: start small, and get started.

“The city needs to stop stirring and start painting,” said ULI panelist Rob Kane, a South African developer and chairman of the Cape Town City Improvement District, speaking to about 30 people who attended the panel presentation.

For the short term, the panel offered several specific recommendations to upgrade the proposed development area, starting with rejuvenating the dead space around the river outside the port entrance. Suggestions included making the road more pedestrian friendly in order to encourage people to walk from the nearby city center and engage with the port.

This could be done by narrowing the roadways, painting the sidewalks, planting trees, and installing lighting. Painting the drab walls of the underpass with murals to “tell the city’s stories” would help put more feet on the street, according to the panel. The panel also suggested that the concrete rubble and invasive vegetation be cleared from the section of the river near the port entrance. At a gala held at the Mandela Bay Development Agency headquarters in November, ULI panelists put up maps of the study area and asked attendees to place colored stickers on areas they would like to see improved (left). (Bosworth/ULI)

Visions of a “People’s Port”

The ULI team identified the proposed upgrade and commercialization of the port as a cornerstone of the development agenda.

The port is owned and operated by the state-owned entity Transnet, which has visions of creating a “people’s port,” possibly featuring retail and leisure infrastructure. The upgrade entails moving the port’s manganese terminal to the nearby Port of Ngqura, a major facility that services the large industrial zone 12 miles (19 km) northeast of the city; the move is slated to take place by 2019. Transnet is still in talks with consultants regarding the specifics of its development vision.

The city is well placed to capitalize on the economic opportunities presented by its port and the Port of Ngqura, said panelist Chris Bliss, estate director for the Liverpool ONE complex, a mixed-use development in the United Kingdom.

Having two port powerhouses driving the region’s economy is “just amazing,” Bliss said. “There are many locations around the world that would die for that economic opportunity.”

Combining a working port with a maritime and leisure destination would create new businesses and jobs, he said. He encouraged the municipality and port authority to consider ways to capitalize on the cruise industry since 40 cruise liners already arrive at the port every year. He emphasized that collaboration between city officials and the port authority would be essential for fulfillment of the development vision. ULI panelists heard from Port Elizabeth community members that people feel unsafe walking in the city’s parks and green spaces. This sign in Settlers Park warns walkers to walk in groups and conceal their valuables as a precaution. (Bosworth/ULI)

The ULI panel shared residents’ concerns about safety in the city, especially in its parks and on the trails that wind through the green spaces along the Baakens River. They identified as a key site for intervention the area around St. George’s Park, the city’s oldest park, which is near the medical center and has sports fields and a conservancy.

“What we heard with this area is you have three challenges: you need to keep it clean, safe, and secure,” said panelist Molly McCabe, president of sustainable property consultancy HaydenTanner. “But we think you have one solution that you already know about.”

That solution, McCabe said, would be creation of a city improvement district, or special rating area (SRA), as it is known locally. SRAs are designated areas in a city where property owners pay fees above the regular municipal tax rates for additional services such as security patrols, upgrades of parks and open spaces, and street cleaning. The city’s first SRA started operating in April in the gentrified Richmond Hill neighborhood. Another SRA should be created along the lower section of the Baakens River, the panel recommended.

The panel also highlighted the desire to create employment opportunities, especially for the city’s young people. To help meet that objective, the panel recommended that the municipality finalize an agreement with a local organization that would train young people to remove invasive plants that are choking the river flow. The presence of these workers would also help make the walking and biking trails that weave through the Baakens Valley safer. The namesake port of Port Elizabeth, South Africa, which the ULI panelists visited in November. (Bosworth/ULI)

Cleaning up the river through the youth training initiative would be an easy place to start once funding comes through, agreed Dorelle Sapere, planning and development manager for the Mandela Bay Development Agency. “It can involve youth, it can involve job creation, and it’s got a good recipe,” she said in an interview after the panel’s presentation.

Sapere also agreed with the panel’s idea of making the no-man’s land between the river and port more pedestrian friendly with the addition of paving, lighting, and public art. Though she said she thinks creating SRAs makes sense, she suggested finding alternative ways to subsidize improvement activities because of the low number of landowners in the area.

While the Mandela Bay Development Agency is mandated to do the proposed work to implement development, the municipality would need to provide leadership and collaborate with the port on additional development activities, said McCarthy. “We can’t just leave the agency to do everything,” she said. “We’ve got to recognize the common problem.”

The city had been in a state of limbo for too long due to a lack of focused leadership under the previous administration and excessive bureaucracy, said Deon Pretorius, a city resident and founder of Development Partners, a company specializing in social and economic development research. A focus is needed on linking central business district development to development of the city at large, including its informal settlements, he said. He expressed hopefulness that things will move forward under the city’s new leadership, but said change will take time.

“I very much like the approach that was articulated [by the panel] about taking small, incremental steps. That’s a sound developmental principle,” said Pretorius. “You start with what is achievable, what you can use to show impact—that gives people hope. You create evidence of progress, and that lays the platform for you to take on your bigger challenges.”

Since 1947, the ULI Advisory Services program has worked with local governments, private developers, communities, community development corporations, and many other organizations to address challenging real estate and land use issues facing communities today.