Plant of the month, Vaccinium exul 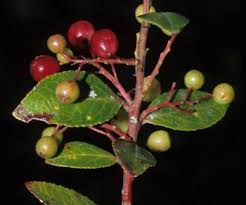 In southern Africa the heath family (Ericaceae) is represented by only two indigenous genera: Erica which is extremely speciose, containing ± 770 species, and Vaccinium, represented by a single species. Globally Vaccinium is best known for being utilised as a fruit source, with most species being wild harvested and only a few developed into economic crop plants.

In South Africa the habit of Vaccinium exul is usually that of a shrub or small bush, 1–2 m tall, unlike the plants in Malawi, that grow into trees 4–7 m tall. Plants are single-stemmed, or more usually much branched from the base and frequently coppicing when damaged or burnt in their natural habitat, which is prone to frequent fires. The stems are somewhat angular with few, very short hairs. The bark is grey, pale brown or reddish, sometimes striated. 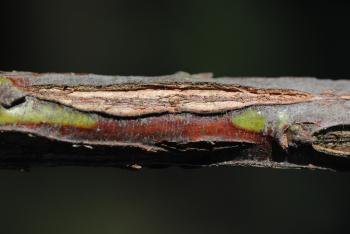 The leaves are alternate, lanceolate to ovate-lanceolate, 30–70 × 9–32 mm, with a serrate margin; the apex is acute or sometimes tapering and the base slightly tapering or rounded; dark green and glossy above, light green sometimes blue-green below, leathery; with a short petiole, 2–5 mm long, which is pinkish. 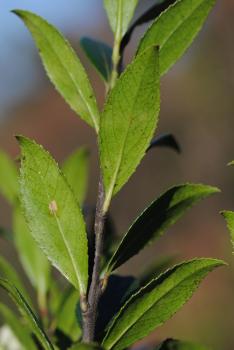 The inflorescence is a raceme up to 40 mm long and usually hidden amongst foliage, with the pedicels 5–12 mm long. The flowers are urn-shaped, 6–7 mm long, restricted in the throat and with the segments recurved, white to cream-coloured, sometimes pale pink, or with a pinkish tinge, dull- or off-white, cream-coloured or white, rarely greenish, and faintly musky or softly sweetly scented. There are 10 included stamens and the anther has pores on the tips. The fruits are fleshy, succulent, rounded, edible berries, about 7 mm in diameter, that are greenish or yellowish, turning red, maroon, bluish or black, when ripe.

Plants usually flower in early spring and the recorded flowering time is from August to November (specimens in bud recorded for July to September), with successive fruiting from November to May, but mostly in April and May.

According to the website https://redlist.sanbi.org, checked on 27 November 2015, the conservation status of this plant is Least Concern (LC). However, its natural habitat and vegetation type, mainly Lydenburg Montane Grassland, is considered Vulnerable and regarded to be of conservation importance.

Vaccinium exul is found on the Eastern Escarpment in South Africa and Swaziland, with its northern limit a disjunct distribution on Mount Mulanje in Malawi. In South Africa it is restricted to the high altitude escarpment areas of the Mpumalanga Province and on the Soutpansberg in the Limpopo Province.

This species grows in montane areas and along forest and stream margins, here frequently in association with Myricaspecies. The habitat is usually at high altitudes in areas with low winter temperatures, amongst rocky outcrops and steep mountain grassland, in bush clumps and along afromontane forest and riverine margins. Plants have been recorded from altitudes of 1 280–2 438 m in South Africa, and slightly higher altitudes in Malawi.

In South Africa the African blueberry is mainly associated with the northeastern Mountain Grassland vegetation type which comprises the grasslands of the northern parts of the great escarpment mountains in Mpumalanga and extends to the north and south. These areas receive a high summer rainfall (700–1 100 mm per annum) and mist contributes substantially to the total precipitation. The temperatures range from -8–39°C, with an average of ± 15°C. The soils on the steep rocky mountainsides where it grows, are usually shallow, nutrient poor and acidic. In winter the low temperatures, frost and snow are further important determinants of this vegetation type which produce suitable natural habitat for Vaccinium exul to grow in.

On a collecting trip of Harry Bolus in 1886, he collected a plant that N.E. Brown identified as the first Vaccinium known from Africa, which was described in 1890. This represented the southernmost member for the genus. Today, in continental Africa Vaccinium is currently represented by two species: Vaccinium exul and V. stanleyi. These are complemented by another four species from Madagascar: V. fasciculatum, V. laevigatum, V. madagascariense and V. secundiflorum. Depending on the classification followed the number of species globally ranges between 140 and 500 and are widely distributed, occurring mainly in Malaysia and the northern temperate zone, but extending to the mountains in the tropics, and Madagascar. The genus occurs mainly in the northern hemisphere (tropical America and Asia) with the best-known species there the bilberry (V. myrtillus), the cowberry (V. vitisidaea), the highbush blueberry (V. corymbosum), and the lowbush blueberry (V. angustifolium) and the cranberry (V. oxycoccos), which are mainly utilised for their fruit.

Vaccinium is an old Latin name with uncertain origin. The most plausible explanation for the name is that it was used in classical Latin indicating a plant (possibly the bilberry) and it was derived from the corruption of the stem of the Latin wordbacca (berry) which was spelt as vaccinium instead of baccinium. The specific epithet of the African blueberry, exul (exile), was chosen as this was the first representative from Africa and geographically it was far removed from the centres of diversity for this genus and hence alludes to being the ‘exile’ or ‘outcast’ species.

Although not observed in Vaccinium exul, in general Vaccinium species are used as food plants by the larvae of a number of Lepidoptera (butterfly and moth species). It is a generally important food source for numerous species of mammals and birds.

Little is known of the pollination syndromes in the Ericaceae as a whole. In Vaccinium exul, the urceolate (urn-shaped) corolla has a narrow opening, the anthers have pores (rounded openings) at the tips and are positioned approximately at the mouth of the corolla, and the flower produces nectar, all of which is indicative of buzz-pollination.

The baccate (berry-like) fruits are eaten by birds and dispersal is endozoochorous, meaning they are ingested by the birds, the seeds pass unharmed through the animal’s digestive system and are dispersed in the droppings. 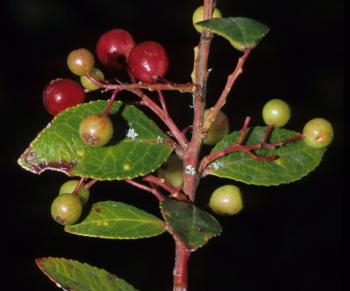 Although information on the indigenous uses of the African blueberry is almost non-existent in literature, the fruits are edible and tasty, and are suitable for desserts or can be used to produce a pleasant jam. Vaccinium berries are generally utilised as fresh or dried fruit, processed as jam or jellies, preserves used in pastry products, as juice and even in wines, and Christmas decorations, but as the African blueberry is not commercially available because of its restricted natural distribution range it is only utilised locally and mainly by indigenous people.

One of the  general attributes of the berries of Vaccinium species is that they are a good source of vitamin C, with very high levels of antioxidants. In clinical studies on animals, blueberries have shown a reduction in the build-up of low-density lipoprotein (LDL) cholesterol, which in turn may reduce heart disease, stroke and atherosclerosis. Further benefits include the reversal of some aging effects, including loss of coordination and balance, improved short-term memory, and some reverse of a decline in motor skills. Whether blueberries will show the same effect in humans, has not yet been tested. None of the aforementioned properties have been tested on Vaccinium exul, which presents scope for further research.

Plants are very decorative. Cultivated plants in a garden will not only be an asset in terms of their structural value and evergreen foliage, but they will surely attract birds with their fruits. Because the plant is adapted to areas with low winter temperatures it will probably not flower or fruit well if planted in areas that do not have similar environmental attributes equivalent to their natural distribution.

This species has been successfully cultivated, but outside its natural high altitudinal ranges and specific environmental conditions, it does not fare well. The areas with a suitable climate for the production of commercial blueberries in the Eastern Highveld of South Africa coincide with the areas of natural distribution of Vaccinium exul. Plants will grow well where the mean annual temperature is ±14°C and mean winter minimum and maximum temperature is low, ±3-18°C. In the wild, plants grow in shallow soils with a low clay content and low pH of 3.5–4.5. Simulating these conditions will help in getting these plants to grow.