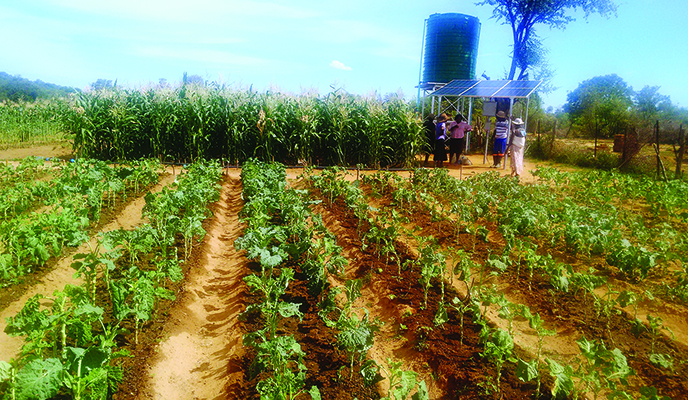 Villagers in Gwanda, Matabeleland South Province have welcomed a solar-powered horticulture project that was recently installed in some parts of the area in a bid to alleviate hunger and increase food security in one of the country’s driest areas.

The villagers have been depending on food handouts from both government and civil society, but the advent of the solar powered water pumps have brought hope, as villagers are now into horticulture practices.

The programme, being funded by the Jersey Overseas Aid Commission (JOAC) and being implemented by Practical Action, has seen more than 60 households, mainly in Sibula Village, Gwanda North benefiting.

Leslie Masotsha Tshalibe (60), chairman of Matshokodo garden in Ward 8, said the solar powered garden project has transformed their lives through ensuring that vulnerable members of society have food on the tables.

“The project is indeed a saviour, as a number of households in this ward are benefiting through increased food security. For example, Matshokodo garden consists of 20 members, who irrigate both vegetables and maize on a small portion. When we embraced the programme, we were many, but some villagers later dropped out along the way, but look now, soon, we will be harvesting maize.

“We are living in a dry region and irrigation is the only way villagers can do their farming. The garden is small, but we intend to enlargen it after selling our vegetables, so we grow more crops. We do not experience power shortages, as the sun is always available,” Tshabile said.

A solar-powered submersible pump submerged in Maleme river pumps water into a big tank. The farmers, then irrigate their crops using water from the tank.

“The pump is buried in the sand and is tapping from the water table. Even if the rains are not enough to flood the river, we are safe because we are depending on the water table. Each household has two long vegetable beds and two long maize beds. This is the first year and in the next three years we will be bigger,” he said.

Of the 20 members, only six are men, while the rest are women.

Regina Sibanda (63) said apart from having enough food, she is now selling surplus crops and earning herself a few dollars.
“Before this project, I used to carry a 20-litre container on my head up the banks of the river to water my single bed. Imagine, at 63,” she said.

When the solar powered garden project came to this area I embraced it and here I am. I have abundant food for my six grandchildren and I am selling surplus within the village. Irrigation has made farming easier.”

Village headman, Dumisani Tshabile, also a beneficiary of the irrigation scheme, hailed the solar powered garden concept and said if many are installed in the area, a lot of villagers would be saved from hunger and poverty.

“After the success story of Matshokodo garden, we received numerous calls from other villagers, who want to venture into horticulture through solar powered gardens. Gwanda is a hot and dry region and the concept is efficient in ensuring that villagers yield something from farming.

“We are currently setting up more solar powered gardens in the area and we hope others will copy the concept and improve food security in Gwanda.

Meanwhile, the country is facing the worst ever drought, with government encouraging farmers with irrigation facilities to utilise them.

Horticulture has been suffering since the dawn of the millennium, with statistics revealing a decline in exports.

In 1999 Zimbabwe pocketed more than $140 million, but latest statistics show that the country is earning less than $40 million from horticultural exports.

According to reports, Zimbabwe exported about 85% of its flowers to the Netherlands, while about 90% of the total fresh vegetables landed in Britain, South Africa, Zambia and Namibia and 80% of fruits were consumed by British and South African markets.

According to a 2012 ZimTrade Report on horticulture, challenges faced by the sector include power outages, which grossly affect fresh produce exports because they require certain temperatures to be maintained and also affect irrigation of the crops.

Labour shortages in the sector, compounded by low wages have also affected production.

“Horticulture has been on the decline since 2000 and this can be attributed to a number of factors and chief among them lack of sponsorship.

The expansion of the horticulture industry will have a positive impact on various other industries, both domestic and foreign.