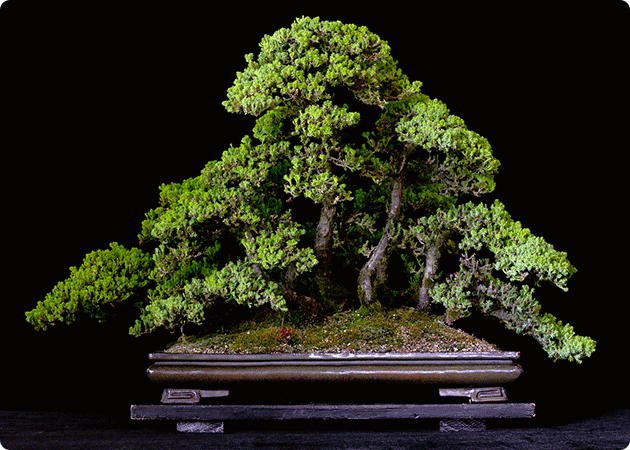 Cape Bonsai Kai, founded over 45 years ago, is one of the oldest and most respected bonsai clubs in South Africa.

Their annual exhibition was held at the Lecture Hall in Kirstenbosch on December 18th. Over 100 beautiful examples of the ancient art were exhibited for the public to admire, with many of the bonsai’s being indigenous species.

demonstrations, how to design and care for your living creation from some the country’s best aficionados including Terry Erasmus, was one of the highlights of this event–

There is usually at least one major show in summer; and how stimulating to see the beautiful trees of gifted and hard working growers.

The Cape Bonsai Kai show was great fun and the club members were honoured to be a part of the preparation, setup and manning of the show which was opened to a very appreciative and eager public.

The show was also a major fund raiser for the year and subsidizes the membership fees which do not cover the costs of running the Kai.

As far as bonsai activity is concerned in the month of January, the following things should be done…

Watering, which is the most important aspect of bonsai care has to be watched carefully. A day of drying, debilitating south east wind can wreak havoc with a tree in a shallow pot especially when coupled with high temperatures. Low humidity is the order of the day and mosses suffer. A misting, if it can be arranged, during the working day can help greatly.

Weeding has to be attended to, failing which seeds set, and the old adage is; “one years weed seeds spell seven years work!” or something similar. In any event weeds are unsightly and they steal the nutrients that belong to the tree.

The warm weather is very conducive to promoting pests and diseases. It pays to be observant and to inspect bonsai for unwelcome and destructive enemies. It may be necessary to take appropriate action.

The sun changes it’s position as the seasons change so ensure that the correct amount of light is available to your bonsai and that they do not get burnt to death by too much sun.

Plants put on spurts of growth periodically and it is necessary to fertilize bonsai. As all the watering causes nutrients to dissolve and leach out of the soil. Use the correct fertilizers at the appropriate doses in order to achieve whatever you have set out to do.

It is a good time to pot or repot certain trees such as the wild figs and some other evergreens. If roots are not disturbed too much trees may also be moved to better and more suitable pots if necessary. There is an enormous range of pots available from Bonsai Nurseries these days.

The most enjoyable and rewarding of all tasks is designing, wiring, pruning and nipping potential bonsai as well as maintenance, dressing and refining of existing bonsai. Ultimately this is what will make the difference between good and indifferent creations.