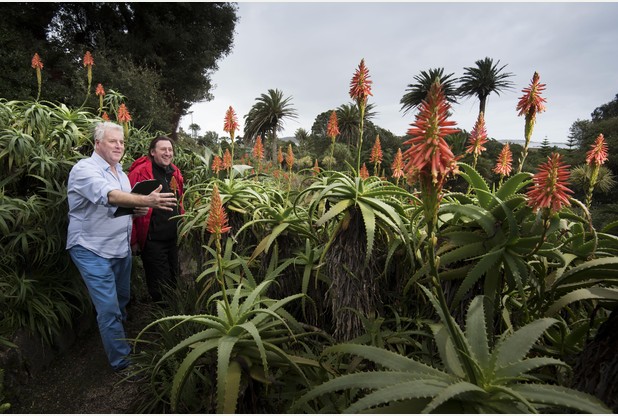 GARDENERS of Tresco Abbey Garden on the Isles of Scilly were ‘pleasantly surprised’ as the botanical wonderland had another record-breaking result in the New Year flower count.

According to the results of the annual tradition, 289 exotic plant species were counted in the annual flower count at the world-famous garden on the island of Tresco.

The record-breaking bloom has been attributed to the warm winter, beating results taken over the last 150 years.

Mike said: “We were pleasantly surprised to count so many flowers in the garden during this year’s count, especially considering the lack of sunshine and strong winds we’ve had this winter.

“With most other gardens in Britain looking less colourful at this time of year the New Year count is always a good time of year to see how many plants we have flowering and it’s great to see the garden is thriving despite such unpredictable seasons.”

A spectacle unseen anywhere else in the country at this time of year, the Abbey Garden is one of the few gardens in the UK that is able to grow a number of exotic species outside, due to its milder climate, with plants from as far afield as South Africa and Australia able to flourish on Tresco year-round.

This year’s array of sub-tropical flowers include a sea of orange South African Aloe, bright yellow Australian Banksia and Mexican Senecio gradniflorus, as well as vibrant scatterings of purple Tibouchina and deep blue Echiums – usually not in flower before April.

While the garden regularly has exotic flora out at this time of year, this year’s warmer winter has seen more flowers blooming early.