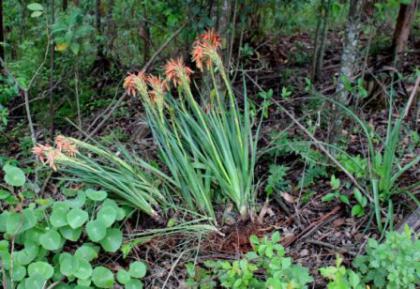 Evelyn Hughes and members of Friends of Beacon Hill in Howick recently came across a site where several individuals of Aloe cooperi had been harvested. The site was significantly disturbed as the attractive plants were seen piled up, appearing to be neatly placed.

According to national and provincial conservation legislation, no plant may be collected without a permit.

Whoever committed this destructive act had apparently been interrupted by a member of Friends of Beacon Hill and dashed off before anyone could intervene. It is speculated that the plants were being harvested for commercial sale. The Friends of Beacon Hill are taking action and plan to set up camera traps to catch the perpetrators in the act.

The site is known to be rich in Aloe cooperi, however in recent years numbers have declined, many attributing this to the lack of rain.

The plant produces flowers that range from greenish-cream to yellowish-orange-pink and are known to bloom between December and February. The species numbers are being affected by habitat loss, overgrazing and alien invasive encroachment. However because of its frequency and extent of range,Aloe cooperi does not meet the criteria for a threatened status.

Just because a species is considered to have a status of least concern on the Redlist does not mean that it will not be threatened in the near future.