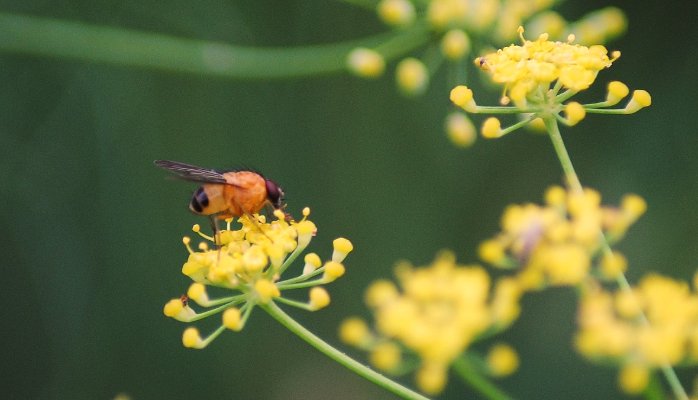 Many things affect pollinators’ activities. These include climate and weather patterns, how groups of flowers are arranged over a landscape, how many flowers are in a group, distances between flowers, the mixture of flowers, and when flowers bloom.

Like savvy shoppers in a one- stop- shop, pollinators often prefer to visit tightly clustered groups of nectar or pollen rich flowers clustered near each other, rather than single flowers spread over a wide area. After all, why waste valuable energy travelling around if you can gather everything you need at one spot? If there are too few flowers in an area, or flowers are too scattered about, pollinators might move elsewhere to search of more lucrative rewards.

If one plant species in the chain does not flower, for instance, or flowers at the wrong time, or if a specialist insect pollinator hatches before or after its plant comes into bloom, the pollinator may totally miss out on the show. For some pollinators, breaks in regular pollination patterns can be a matter of life or death. Pollinators may not survive the period where the ‘chain link’ or pattern is broken.  And without suitable pollinators, flowers do not get pollinated and seeds to spread the next generation of plants do not form. This can start a vicious cycle, where fewer pollinators means less pollinated flowers, means less seeds and fewer flowers next year, means less food for pollinators…in a free-fall towards extinction.

Plant flowering times are often closely linked to local climate conditions. These affect pollinator activities and the type of pollinators found in a region. In moist tropical, sub-tropical and mild temperate regions, for instance, plants often have a long growing and flowering season. Different species bloom in succession at different times over the long growing season. Pollinators in these regions may rely on a variety of different species coming into flower at different times of year.

In deserts and sub-tropical regions with a short rainy season, or in very high altitude and cold temperate regions where severe cold limits the growing season, plants often bloom together in a short flowering season, produce abundant quantities of nectar and pollen, and sport bright showy flowers to catch pollinators’ attention.

Under seasonal conditions, some pollinators adapt by assuming migratory lifestyles that follow a seasonal passage, or pollination corridor, of successively flowering plants across seasonal migration routes. If something breaks the pollination corridor, intense urban or agricultural development that leaves no habitat for pollinators, for instance, the migration chain can be broken. Other pollinators adapt to highly seasonal conditions by only having short lifestyles as pollinators. These may hibernate, or take up other forms of nutrition during the flower dormant season. Those gardeners’ favourites, Ladybird beetles, for instance, are known as important garden predators that feast on aphids and other small succulent insects that often cause headaches for gardeners. Yet gardeners are often unaware that Ladybirds are also pollinators. In early spring, when aphids are in short supply, Ladybird beetles may feed on pollen, including pollen from weeds such as dandelions.  Later in the season adult Ladybird beetles seek out plants that host their prey, such as aphids, to lay their eggs on. When the eggs hatch the larvae feed off the nearby prey, and so do the adults. In cold winters adult Ladybird beetles hibernate, seeking out shelter in thick leaf litter, and amongst rocks and bark strips. If there are not enough early flowering pollen plants to provide spring pollen food, summer plants to host aphids or other prey for adult ladybird beetles and their larvae, and winter hibernating quarters in the form of sheltering rocks, leaf and plant litter, then the Ladybirds might battle to survive. This, of course, benefits all those pests Ladybirds feed on.

These are some other things that affect pollinators’ ability to thrive: –

Fortunately, as gardeners and landscape designers, we can also do a great deal to help pollinators flourish in our area. In the next blog, Part 3 of this pollinator series, I will discuss ways to design landscapes to attract and sustain pollinator activities.