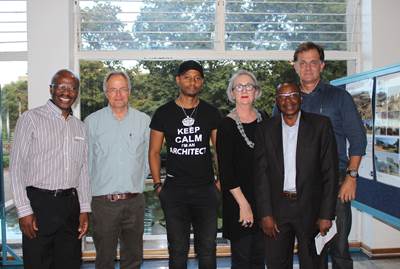 The Corobrik SAIA Awards of Merit and Excellence were kicked off at a special event hosted by the South African Institute of Architects (SAIA) at the University of the Witwatersrand on 10 February.

This took the form of an afternoon lecture series providing a snapshot of the shaping of architecture – past, present and future – by the award adjudicators, and marked the end of the first day of a three-day exhibition featuring posters of the projects submitted for the awards.

The five awards judges, all experts in their field, were welcomed by Obert Chakarisa, the Chief Executive Officer of SAIA. Mr Chakarisa applauded the fact that a record 66 entries had been entered into this years’ Award programme, which bears testimony to the importance of architecture in South Africa today.

Eminent architect, Mokena Makeka quoted data from the World Economic Forum in his talk entitled ‘Architecture and the Future of Cities’, highlighting the pressure that fast-growing populations are placing on cities globally.

“Cities have evolved into a more complex space inter-linked by a number of systems and planners generally have failed to read the ‘Urban Progression’ and thus cities have failed significantly in terms of the ‘Quality of Life’ of the urbanites,” Makeka said.

He quoted statistics showing that among the fastest growing megacities are Mexico City, New York, New Delhi and Tokyo. It is expected that Mexico City’s population will grow from 20 million in 2011 to 25 million in 2025, a 25% increase in 14 years. In the same period, the population of New Delhi will increase from 23 million to 33 million, a growth rate of 43%.  Tokyo’s population is expected to reach 39 million by 2025.

He went on to reveal that, as the rate of urbanization increases a “key feature of this future will be the melding together of mega-cities and their coalescence into mega-regions reaching population concentrations of more than 100 million people – called the ‘never-ending’ city. Hong Kong together with Shenzhen and Guangzhou may soon become the largest city-conglomeration on the planet with 120 million inhabitants.”

“Over a quarter of the 100 fastest-growing cities in the world are in Africa. The continent already has more than 25 cities with populations of 1 million people or more,” he said.

Makeka said that what was needed were affordable and inclusive new “adaptive” cities with smart grids and full access. The challenge for architects was to grasp the seven modalities of the 21stcentury city – governance, rising inequality, technology, sustainability, spatial economy and global value chains, with design at the centre.

“Waiting for the Right Architect” was the topic of a talk by Professor Paul Kotze, an academic architect.

He said that the relationship between client and architect and, for that matter, the whole team of professionals and builders who work on a building project, was of the utmost importance.

“The history of architecture is, sadly, littered with negative examples of an adversarial relationship between architect and client, or within the larger team who are responsible for specific buildings,” he said.

“The other side of the coin – where a supportive and inspirational relationship exists between clients and architect that has a positive outcome on the building – is so often forgotten and not celebrated,” he said. “When the factors that make buildings ‘good and inspiring’ are unearthed, it is this very relationship that mostly underpins these perceptions of physical quality.”

Kotze cited examples of projects where inspired and knowledgeable individuals had a positive influence, such as the Khyber Rock House and Ubuntu Centre by Palo Alto based architect, Stan Field (now Field Architecture) and the Wits Art Museum by Cohen and Garson.

In his presentation entitled ‘Architecture: From Creativity to Painting by Numbers’, the Convenor of the Corobrik SAIA Awards adjudication, Kevin Bingham, questioned creativity in architecture and how the criteria for judging award-winning architecture may have changed over time.

He asked whether or not awards were suited to particular building types, more than others, and explored how design guidelines paint by numbers – have an impact on architectural design.

His lecture was a tour from Vitruvius to 2016 and concluded with examples of his current work in medical architecture and associated research.

Sumien Brink, eminent layperson and editor-in-chief of Visi design, décor and architecture magazine, gave an insight into the past, present and future of the publication since its inception in 1999. She gave a visual run-though of the magazine’s covers over the past 17 years and of the Corobrik SAIA Award winners that Visi had featured.

Stressing the importance of their digital offering, particularly the rapid upward trend of their website, Brink hinted that time would tell whether there would still be a Visi magazine in ten years’ time.

Musa Shangase, commercial director of Corobrik, the awards sponsor, delivered the final presentation of the afternoon, entitled ‘Affordable for Life’ in which he highlighted the benefits offered by clay brick masonry to the construction industry.

“When we say that clay brick is affordable for life, we are talking about a very long lifespan – an average of 500 years according to a 2004 study by the University of Leeds,” he said.

“Throughout southern Africa, clay brick buildings shape our architectural heritage, with the oldest surviving building in the country being the Castle of Good Hope Bell Tower in Cape Town which was built between 1666 and 1684.”

Shangase said that, due to its extended lifespan, clay brick masonry was the most economical, low risk and practical building material available today, both during and after construction.

“Clay brick requires no power tools, can be stored and built in all weather, is of consistently high quality as it is manufactured to SABS standards, and is flexible because it is modular. It never rots, punctures, tears, dents, fades, decays, corrodes, tarnishes or becomes brittle.”

“Clay masonry is uniquely suited to the African climate and lifestyle and there is a growing market for recycled bricks and pavers for repairing historic buildings or building new structures. All of this helps to offset its carbon footprint.”

Shangase concluded his talk by saying, “The architects we will be honouring in the Corobrik SAIA Awards will set new benchmarks in aesthetics, energy efficiency, safety and sustainability. This means that those of us in the business of supplying construction materials need to continually improve to keep up with their ideas.”

The poster entries for the Corobrik SAIA Awards will be on display until midday on 12 February in the John Moffat Building at the University of the Witwatersrand.

Please note that our CEO is not part of the adjudication panel but was MC for the evening.  The titles used for the people in the picture are according to their role on the SAIA panel.  They have other titles in their professional lives.