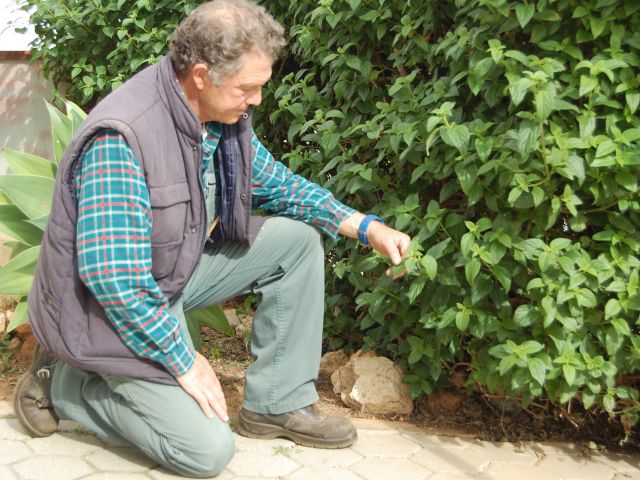 A gardener who went into anaphylactic shock and suffered four heart attacks after coming into contact with the notoriously toxic processionary caterpillar, leaving him in need of a triple bypass, has spoken of his life-threatening ordeal in a bid to warn others of just how dangerous the insect can be to humans.

In May 2014, South African expat Denis Martin Fouché, 55, was left at death’s door after inhaling tiny poisonous hairs from the toxic insects.
“I was tending to a client’s garden, mowing the lawn when a nest of the caterpillars fell out of a tree. I went over the nest with the lawn mower thinking it would just be absorbed into the ground. I thought nothing of it, then went on to do another job”, he tells The Portugal News.
Later that night Mr. Fouché, who runs a general maintenance business and has lived in Portugal for 27 years, noticed a rash on his neck.
“I put some cream on and went to bed”, he recalls.
At around 1.30am that morning Mr. Fouché woke up with pains in his chest and arms.
“I’m asthmatic so I thought I was just having an asthma attack and used my pump. It helped so I went back to sleep. But at around 4.30am it came back with a vengeance and I told my wife to call INEM emergency medics”.
After arriving, it took the medical team half an hour to stabilise Mr. Fouché, who lives in Monte Canelas, Alvor (Portimão) before being able to transport him to Portimão hospital.
“One of the INEM doctors told me I had gone into anaphylactic shock and if I hadn’t used my asthma inhaler I would probably be dead. I would have suffocated as my throat closed up.
“Doctors at the hospital asked me straight away if I had been in contact with poison”, he continues; “They did a scan of my heart and saw that all the veins to it had gone into a U-shape from the swelling.”
Mr Fouché was sent from Portimão to the specialist cardiology unit at Faro hospital, and then onto Lisbon’s Santa Maria hospital for a triple bypass.
Before his life-saving operation he suffered four heart attacks and almost died on at least one occasion as a result of the poisoning.
Despite now being fully recovered and back at work, Denis Fouché says “I still feel very scared when I see the nests.”
He says he wants to warn others just how dangerous the bugs can be, and make people aware that pine trees can be treated once or twice a year to prevent the caterpillars from breeding and hatching.
Now, he adds, is peak season for them.
The processionary caterpillars, or pine processionary, is known as one of the most destructive species to pines and cedars in Central Asia, North Africa and southern Europe.
Its urticating hairs can cause harmful – and in Mr. Fouché’s case, almost fatal – reactions in humans and other mammals.
Reflecting on the ordeal he says “It has changed my life completely. I think about life in a completely different way. We know that the caterpillars can be lethal to animals but I believe they could kill a small child and people need to be aware of this.”