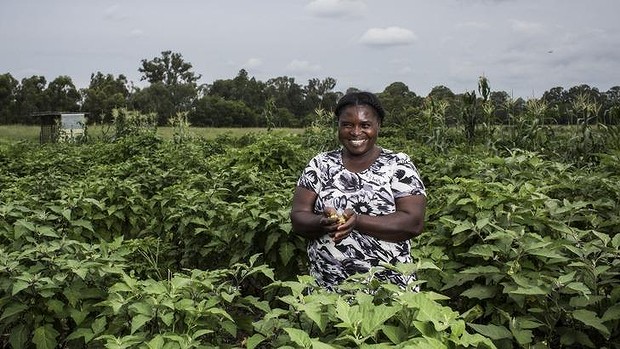 ​In northern Liberia, the leaves of sweet potato are harvested, but not the tuber. I learn this from Wemoy Koholo, who is picking a bunch of sweet potato leaves from her plot at Mamre House in Western Sydney when I visit.
Mamre House is a unique community experiment in horticultural therapy. Based on the knowledge that gardening is restorative and nurturing, and that food is comfort and culture, Mamre Farm rents garden plots to refugee, migrant and community groups for a nominal fee so they can grow the foods that are important to them.
Mamre was established in the early years of the 19th century as a model farm by Reverend Samuel Marsden, who was known as the “flogging parson”. This is not quite the model Marsden had in mind, but it’s worth following.
Groups from Vietnam, South Africa and Egypt have previously been involved with the farm, and families from Burma, Sudan and Liberia are growing food here. Two more plots are available.
Advertisement

“It’s very rewarding work,” says Michael Manning, the farm’s manager. “You do see how the farm helps people get over the crises they went through to get here.”
It’s also a mutually beneficial arrangement. “I learn about how they grow their food, and I teach them about growing the Western produce they’re not familiar with,” says Manning. Not that he’s had much luck convincing the Liberian ladies of the charms of beetroot.
Rosella is a different story. Elizabeth Htoo grows rosella, Hibiscus sabdariffa, at Mamre and harvests the lemony-flavoured leaves to sell to the Burmese community. In Burmese cooking, they are fried up with shrimp paste, but Htoo didn’t realise that rosella fruit was worth eating until she tried rosella jam and rosella cordial at a Mamre market day.
In Koholo’s plot there is taro (grown for the leaves, not the tuber), pea eggplants and African eggplants, which are called bitter balls in Liberia, for immediately obvious reasons. There are also less familiar foods, such as mulukhiyah, also called Egyptian leaf. It’s a traditional staple in the Middle East and North Africa, used in soups and stews. When boiled, the leaves have a bitter flavour and a slippery, slimy texture, a bit like okra.
Gardening and cooking tips are shared, money is earned and English improves, but for Koholo the No. 1 benefit of the farm project is through food’s connection to culture.
She came to Australia with her husband, two children and their neighbour’s son eight years ago, escaping the horrors of the Liberian civil war. And that’s one reason she won’t consider sweet potato tubers. They are food for desperate times.
“We only ate them in the war,” she explains. Every day she cooks something for the family that she has grown at the farm. “I want our children to know the culture, the language and the food,” she says.
Tonight she’s taking home mulukhiyah and bitter balls – and those sweet potato leaves.
Mamre Farm sells produce on Fridays, 8.30am-4.30pm, 181 Mamre Road, Orchard Hills, mamre.com.au. The Mamre Homestead cafe is due to reopen in March.
Article Source