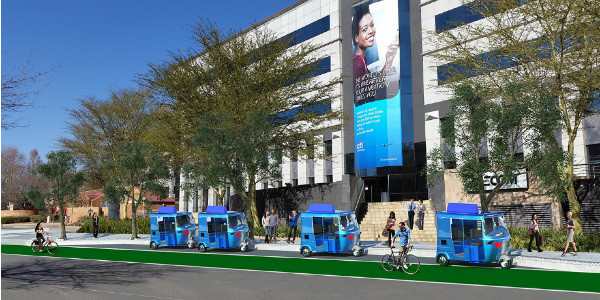 Road construction underway in the Sandton CBD is set to continue for most of 2016 with the City of Johannesburg investing ZAR180 million in massive improvements to roads and pavements in Sandton Central, South Africa’s cosmopolitan financial and commercial hub.

“There will be some inconvenience as construction continues, resulting in traffic congestion and access issues in the affected areas, but it’s a case of short term pain. After the upgrades are complete, the workers and residents of Sandton Central, as well as visitors, will benefit from the world-class infrastructure,” adds Jack.

A key part of the development is to make Sandton’s streets more pedestrian and cycle friendly. Pedestrian sidewalks are being widened and new cycle lanes are being constructed as part of the upgrade of key roads in the Sandton CBD. The project entails not only new paving and tarring of roads, but green landscaping and will include new signage and street furniture.

“This is an important development for Sandton as it represents a major investment in public infrastructure. It will also make Sandton’s streets more walkable, which is an integral part of any vibrant CBD. The advent of the Gautrain and Sandton being home to one of its busiest stations, has seen increased pedestrians on the streets of Sandton,” comments Jack.

“With the Reya Vaya BRT link into Sandton set to be complete in a couple of years and the city’s drive to get more people eco mobile, there will be even more commuters into Sandton and thus pedestrians on its streets. All this makes the current investment in the roads upgrade in Sandton essentially an investment in its future.”

Jack adds that the much-needed roads infrastructure upgrade will without doubt help entrench Sandton Central as the corporate head office hub of the country. “Good infrastructure is key to Sandton not only retaining existing businesses, but attracting leading corporates and new business to this vibrant commercial centre”

While construction continues on roads in Sandton Central, the node is home to several major private sector driven property developments. Sandton is well established, but its strong reputation as SA’s financial hub has seen it attract unprecedented new office and mixed-use development in recent years.

“The road upgrade is a complicated project that involves undertaking construction in a busy commercial centre already bustling with construction activity. Road construction in a CBD also entails detecting and relocating bulk services. Due to these complexities, the roads upgrade is being done in phases,” comments Jack.

“While road construction is underway, it is going to require us all – the workers, residents and visitors to Sandton – to be a bit more tolerant of the inconveniences that arise. It may mean that we plan our trips better, use public transport or decide to walk. The EcoMobility Festival in October showed what can be done,” she adds.

The roads upgrade project in the Sandton CBD is being undertaken by the Johannesburg Development Agency (JDA), which is an agency of the City of Johannesburg.

Below are the timelines and construction programme for the roads upgrade project in the Sandton CBD, provided by the JDA:

22 April 2016 – 18 August 2016 – upgrade and paving of Maude Street from West Street and Fifth – includes new cycle lanes and pedestrian sidewalks as well as service detection and relocation of services.