An eco-friendly landscape design to welcome our Amphibious wildlife. 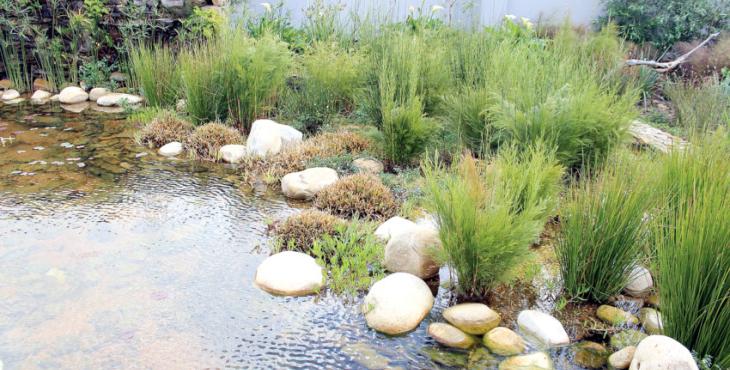 Cape Town – Wildlife plays a vital role in a healthy ecosystem. Many South African birds, amphibians and reptiles are protected or endangered species because of urbanisation, agriculture, roads and highways which have destroyed their natural habitats.

In many countries, eco-friendly wildlife crossings – over and underpasses – allow for the safe passage of large and small wildlife. Rope bridges span roads to allow squirrels to cross, fish use tiered ladders and a wildlife crossing in the Netherlands spans a river, roads, railway line and a golf course.

Amphibians are given safe passage through culverts and eco-ducts under roads, and frog and toad crossing signs on roads can be found in many countries, including South Africa.

The western leopard toad (Amietophrynus pantherinus) has brilliant colouring and markings and is endemic to the coastal lowlands of the south-western Cape. They are endemic to the fynbos biome but can also be found near wetlands, on farms, golf courses and in gardens.

Toads need cover from predators in the form of shrubs, stacked wood, compost and rocks. They eat bugs, caterpillars, snails and beetles.

The western leopard toad needs access to a pond or wetland once a year for breeding. If they live in a garden, palisade fences work well, as do solid walls with weep holes, as these allow the toads to make their way to a suitable breeding place. Their breeding season, is in August, often on rainy nights, which means they have to cross roads to reach the water and many are killed by vehicles.

To prevent this, volunteers, such as Noordhoek’s Unpaid Toad Savers (Nuts), patrol roads in the evenings during the breeding season. Temporary cloth barriers are erected on either side of the roads, and buckets are placed to catch the toads. They are carried across the road to their breeding place, and later returned to their habitats.

Against this background, conservationists and the City’s Invasive Species Unit have been dismayed by the discovery of an invasive guttural toad (Amieth-ryphrynus gutturalis) in Noordhoek.

Noordhoek is one of the most important breeding areas of the western leopard toad, a close relative of the guttural toad. In nature, these species do not co-exist and the invasion of the guttural toad into the western leopard toad’s breeding ground could cause competition for food, predation, the introduction of external diseases and pathogens and, potentially, hybridisation.

Conservationists believe that the advance of the invasive guttural toad must, therefore, be stopped before guttural toads become established and form a viable breeding population in Noordhoek.For more info, email gutturaltoad@ncc-group.co.za.

The protected Cape dwarf chameleon (Bradypodion pumilum) is found only in the Western Cape and is at risk because of destruction of their natural habitat by urbanisation. A chameleon-friendly garden needs large and small shrubs, with varying diameters of stems, as well as thatching reeds that will provide perches and protection.

Chameleons drink the dew off the leaves of plants. Their natural camouflage of changing colour allows them to blend with foliage and hide from predators and prey. Chameleons eat flies, moths, butterflies and small grasshoppers, so make sure you have a compost heap, mulches of bark chips and coarse compost, as well as flowers to attract insects.

Large expanses of lawn or hard landscaping will not encourage wildlife to your garden where they are easily visible and easy prey.

To make your garden more wildlife friendly you need to garden in layers, with canopy trees, understory trees, and below these shrubs and plants that cover the ground. Nectar and pollen bearing flowers will bring butterflies, bees, insects and birds that act as pollinators. Compost heaps, mulches and fallen logs are host to fungi and insects. This layered effect affords shelter and provides food for birds, small creatures and insects.

The tallest layers are the canopy trees. Select trees of suitable height and spread to become major role players. for example the weeping boer-bean (Schotia brachypetala) and the lavender tree (Heteropyxis natalensis).Large shrubs become the understory in a small garden, their purpose to provide a safe haven for small creatures.

You will know when your garden is wildlife-friendly when birds sing from the treetops and nest and search for food in the understory; when chameleons are seen sheltering on perches in shrubby growth, when you find a tiny tree frog hidden in a flower or hear the loud snore of the western leopard toad.