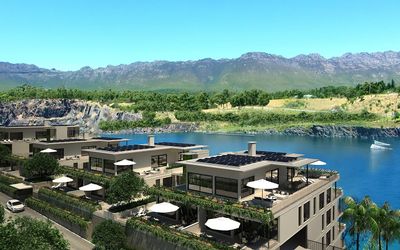 CAPE Town is set to become home to a R14bn green village thought to be the first development of its kind in SA and on the continent.

Swisatec, a Cape Town-based architectural and project management firm, will spearhead the project in Somerset West, which is nestled among some of the Western Cape’s trendiest wine farms.

The project will constitute an upgrade of the popular Blue Rock Resort, where construction is expected to start in August.

The Blue Rock Village will become one of the biggest mixed-use developments in Cape Town.

Richmond Park, a multibillion-rand mixed-use property, is also being developed in Cape Town on a prime greenfields site in Milnerton, adjacent to the N7 highway.

The Western Cape government is also due to launch a multimillion-rand construction project of a mixed-use neighbourhood on the 22ha site in Pinelands of the former Conradie Hospital.

Swisatec, which has forecast that the project will take eight to 10 years to complete, said the village would be the first of its kind in SA and on the continent.

Plans for the mixed-use village include a multifunctional lifestyle centre, medical centres, boutiques, schools and colleges, nurseries, and restaurants and cafés.

Lukas Reichmuth, founder and director of Blue Rock Village, said yesterday that the project would be market driven, focusing on both the international and the South African markets.

“Our apartments are designed to fit different types of individual needs. The development compromises 1,000 luxury apartments built on 40ha of land.

“As the first pioneers of car-free living, our vision of Blue Rock Village is to enjoy the magnificent beauty and natural surroundings where you can experience the great outdoors,” he said. All parking will be underground and the developers plan to construct a helipad.

In keeping with the development’s proposed green ethos, the units will use A+-rated energy-efficient appliances and LED lighting, as well as a water management system, and solar power.

Francois Viruly, a property economist and associate professor at the University of Cape Town, said mixed-use property developments were growing in popularity because of their ability to create a “lifestyle”. However, he cautioned that there were risks associated with such projects.

“It is never easy to get financing for such projects, because you are asking funders to fund different types of risks. Also, such projects take time to complete and things may change over time … in other words, people may change how and where they want to live,” he said.