Landscape architecture news from around Africa 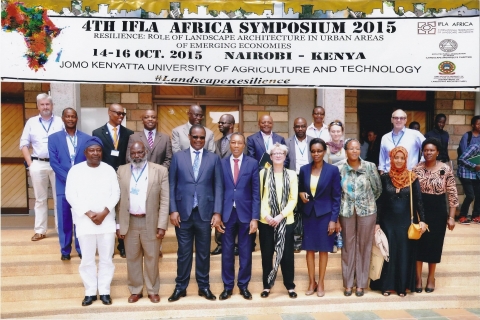 Landscape architecture is moving forward gradually but surely in Africa. Here is a look at some of the countries within the continent and what has been going on landscape wise!

KENYA: It was an interesting, informative and educative time at the 4th IFLA/AFRICA Symposium which took place in Kenya between the 14th and the 16th of  October, 2015. The event theme bordered around Resilience  and  answers were proffered to the question of what  the  role of Landscape Architects in the sprawling Urban Cities in emerging African Economies. Representatives from the following  African countries were represented; Nigeria, South Africa, Kenya, Ethiopia, Tunisia, Malawi.

Pic 1 :A  view of participants from different countries.

The concept of Geo design was effectively explored and communicated by one of the Keynote Speakers Prof. Carl Steinz.  The  IFLA President, Prof. Kathryn Moore gave an engaging address during her opening remarks on the first day of the symposium regarding Strategies for Educational Capacity Development. She further elucidated on the  need for building strong Landscape Architects in the African region buttressing symposium theme’ Resilence’.  Other government functionaries within the Kenyan municipalities were in attendance and a good population of the student community was represented.

Mrs Kathryn Moore on the High table of the IFLA Africa Symposium, in Kenya,  October, 2015.

Prof. Carl Steinz on the High table of the IFLA Africa Symposium, in Kenya,  October, 2015

Students Listening with rapt attention at the IFLA Africa Symposium, in Kenya,  October, 2015

Sessions were broken down into paper presentation times and sub themes such as In(non)formality and Renewal, Urban (Ecology) Bio-diversity, Recreation, Landscape as infrastructure, and Health and Sanitation were addressed.The practice of ceremonial tree planting was also done and the IFLA President as well as the IFLA Africa president did plant their own trees among others.

The Africa Council meeting was held and the final draft of the IFLA Africa constitution was presented by the region president, Dr. Tunji Adejumo for ratification and He made the Regional Council  understand its importance in operating as continental NGO. The IFLA President, Prof Kathryn Moore made the Council  understand some of the recent events globally. The representatives from Ethiopia were introduced. Kelly Leviker and Azizah Abdulfetah. They had met the president of IFLA, Kathryn Moore and had earlier signified their desire to commence landscape architecture program and form Ethiopia Landscape Association officially in 2016. They hence were open to holding a landscape architecture workshop towards this program and it is tentatively slated for early September or late August 2016 in Adiss-ababa in Ethiopia.

NIGERIA
SLAN
The Society of Landscape Architects of Nigeria had its Annual General meeting on the 14th of November, 2015 at the Ahmadu Bello University, Zaria.

Among the issues discussed at this meeting are as follows:

1. General Meeting / Talk on How to install irritation net work on Saturday 14th November, 2015.  Venue : Abuja,  Nigeria
2. Annual General meeting  March or April next year . Venue: Ahmadu Bello University, Zaria,  Nigeria (date to be decided at General meeting of 14/11/2015)
3. World Landscape Architecture month ( WLAM) April, 2016 with activities in all chapters ( (North Centre,  South West, South East and Abuja)
4. Participation in IFLA World Congress in April,  2016
5.Community based projects (Tree Planting) in All Chapters from  May to July, 2016 in all Chapter.
6: One day Capacity Building Work shop for Landscape Architects in all Chapter in September,  2015.

EVENTS: A non-profit environmental organization Sustain Africa Earth initiative under the leadership of a Landscape architect Fadera Williams, has hosted an Inter-University Environmental(Green) debate at the University of Lagos between the 3 ‘undergraduate’ universities in Lagos (CALEB University, University of Lagos and Lagos State University.)  The preliminary competitions took place within the individual universities from July till September, 2015 and the grand finale took place at the inter-university stage on the 28th of September, 2015. The topic was ‘Climate Change Adaptation / Mitigation, which is the way forward for Nigeria? It was interesting to see how students from different faculties and departments presented refreshing perspectives to the subject matter. Also a campaign for clean-up advocacy for Lagos Environment was launched at this event and the Desmond Majekodunmi Student Landscape Award Competition was announced.

The Institute of Landscape architects of South Africa (ILASA) held its merit awards on the 6th of October 2015. Below are some of the highlights of this event!

This Award is given to the most outstanding and excellent projects submitted in any category. Projects are awarded by a unanimous decision by the adjudicating team. At this year’s Merit Awards there were two projects that received this esteemed award.

The notebook was originally compiled for the MLA at UCT and is the product of 12 years of teaching and 30 years of testing the principles in landscape architectural practice. It empowers the reader to understand natural systems in landscape and environmental planning while engaging in knowledge and design principles from a variety of disciplines.

Located in the Manie van der Schiff Botanical garden at the University of Pretoria, this project addressed the needs for heavy foot traffic and stormwater management around a study centre for engineering students. This world class project collects stormwater from the study centre roof and surrounding hard surfaces. The water is stored and cleansed in vegetated swales, ready to be re-used for irrigation in the Botanical Garden. Material for hard landscaping was salvaged from the demolition phase and also recycled waste material from mining operations. The paving and seating is designed to also assist movement to the visually impaired. The sublime integration of habitat, architecture and hard landscaping provides aesthetic, cultural and educational enrichment while also reducing energy use and pollution and improving microclimate.

Professor Ben Farrell (This information was sourced from Landscape SA Magazine, March/April 2015, issue No. 64, courtesy of Karyn Richards.)  This year’s Icon of Landscape Architecture has distinguished himself by playing a pivotal role in both the academic environment and landscape professional practice. One of the founding members of the Institute of Landscape Architects of Southern Africa in 1962, Prof. Farrell also helped establish a chair in landscape architecture at the University of Pretoria in 1971. Prof. Farrell originally studied agriculture but soon began to ponder if he could combine his passions for both music and nature into one profession – which led him to landscape architecture. Since then his work which incorporates in-depth understanding of natural systems as well as adding social value, has been the inspiration of South African landscape architects for decades.

Award for Excellence in Landscape Architecture

This award is given to projects of a world class standard that portray the value that landscape architects contribute to the built environment. Several projects received an Award of Excellence at this year’s Merit Award evening.

Please visit the ilasa website at www.ilasa.co.za for more information on news from South Africa.