Listening to plants in need of water 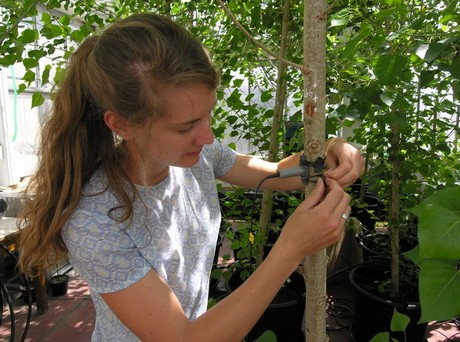 PhD student Lidewei Vergeynst from UGent has discovered in her research how to interpret the sounds made by plants during draught. She has developed a method of analysis so that, via acoustic sensors, we can listen to the sounds that plants make. In this way, you can know how loudly a plant is calling for water during a drought. This is important news in view of climate change.

The measurements take place with an acoustic detector. This is put on the outside of the stem or branch and detects the noises inside the plant, just like a stethoscope. In normal circumstances, plants transpire water via the leaves that they suck up via a narrow tube system (veins), so that the whole water column is in negative pressure. That sucking can be compared with the way you suck water up through a straw. But as it gets drier, the leaves need to suck harder, the pressure becomes more negative and the water column can break. If the plants gets too little water, there can be air pockets in the veins. That can hinder the plant from transporting water via the veins and also causes a clicking noise that can be heard by the detector. This is called cavitation and too much cavitation can be deadly.

Previously, researchers only counted the clicks. The more clicks, the worse it was for the plant. But if the plant was dead, they still heard clicks. Therefore there was uncertainty about the nature of the clicks. Vergeyst made a breakthrough when she analysed the clicks in detail. Every click is a sound wave and from the properties of the sound wave, it is possible to distinguish between sounds of cavitation or of other processes in the plant. “We expect that Lidewei’s method will become a reference point in plant research,” says her promoter, professor Kathy Steppe from the laboratory for plant ecology. “Some researchers had lost faith in acoustic sensors. We have shown in the research (that was financed by the Fonds Wetenschappelijk Onderzoek (FWO)) that it is still very useful.”

Climate Change
The discovery is very important in view of climate change. Not only did van Steppe’s team succeed in testing whether a plant had water shortage, but with other sensors, the researchers could also immediately see how much water a plant was using. “Through this combination of various plant sensors, we can get a better insight into the draught process. An important factor in the debate about the die-back of forests in dry areas is hydraulic failure. With our discovery, you can save not only forests, but also food cultivation. We can now give better advice about varieties which survive better in dry areas.”
It is still not clear if the process of air bubbles in the veins is reversible. There is still a lot of debate. “We believe that plants show a clear recovery,” says professor Steppe. “We are currently researching this. And we hope to discover the underlying mechanism, so that we can again help science to take another step forward. Just like doctors in the intensive care unit, we are putting heart monitors on plants. We want the plants to be able to talk to us so that we can evaluate how well it’s going. That, as a bio engineer, the engineer of living material, is our ultimate goal.”
Article Source