Plant of the week: Watsonia pillansii 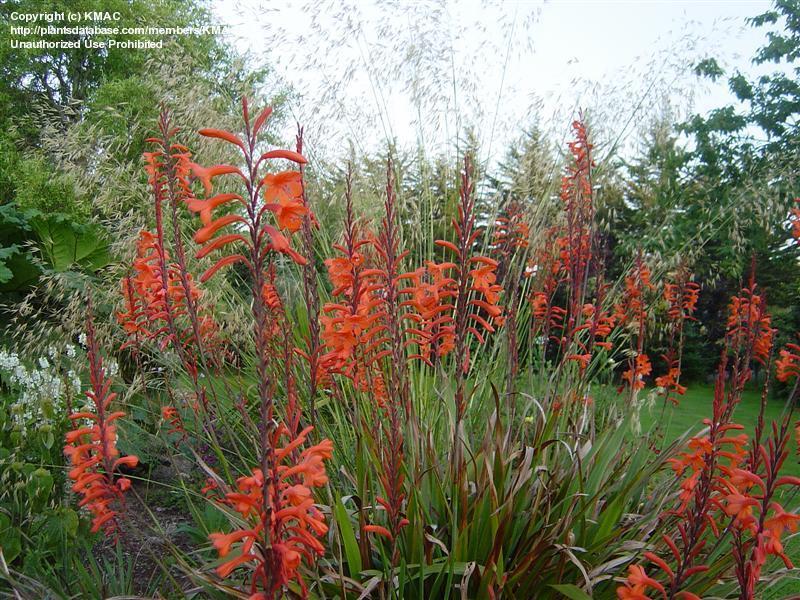 Watsonia pillansii has bright orange summer flowers and is a rewarding garden plant, ideal for a sunny, well-watered but well-drained spot in the garden.

A robust, medium-sized, evergreen, summer-growing, clump-forming geophyte, 0.5–1.2 m tall. The rootstock is a corm, 30–45 mm in diameter, with a grey-brown tunic forming a thick protective covering. The stem is usually unbranched but can have 1 to 3 short, erect branches. Leaves are lance-shaped to nearly linear, 1–18 mm wide, light green. 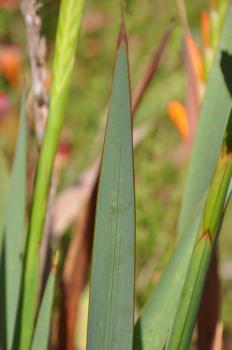 The inflorescence is a spike of 20 to 35 bright orange to orange-red flowers. The flowers are elongated narrow tubes, 35–50 mm long, 2–3 mm wide at the base and 6 mm wide at the mouth. At the mouth of the tube are 6 spreading, narrow tepals, 20–26 mm long, held more or less at right angles to the tube, the uppermost somewhat hooded or vertical when fully open. The anthers are on 30–40 mm filaments which place them in a bunch just below the upper tepal. They are violet to cream-coloured. The style arches over the filaments and divides at about mid-anther level into ± 7 mm long branches. The base of the flower tube is enclosed by a long, green or partly reddish bract, 19–33 mm long, often dry and light brown at the apex. The flowers are unscented and produce nectar. Flowering time is in summer, from December to January, occasionally from November to February. The capsules are rounded, 10–12 mm long, always shorter than the bracts, and split open to release elongate seeds, 7–10 mm long, with short wings at each end. 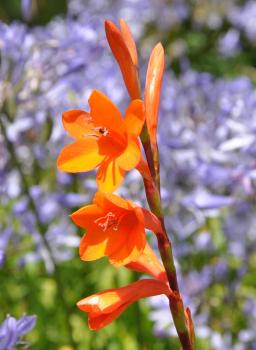 Least Concern (LC). Watsonia pillansii is not threatened, its wild population is stable.

Watsonia pillansii occurs in the eastern half of southern Africa, from the Langeberg near Swellendam and Outeniqua Mountains near George in the Western Cape, through the coastal mountain ranges of the Eastern Cape to the Drakensberg in KwaZulu-Natal. It occurs at the coast to the lower and middle elevations, at 2 400 m altitude, usually in mixed grassland, but also in exposed sites among rocks, in clumps and large colonies.

The genus Watsonia was named by Philip Miller after his friend Sir William Watson (1715–87), a physician and naturalist from London. This species is named in honour of Neville Pillans (1884–1964), Cape Town botanist, who worked at the Bolus Herbarium from 1918 until retirement in 1952.

Watsonia pillansii is closely related to, and very similar to, W. knysnana (Knysna watsonia), but can be distinguished by flower colour, W. knysnana flowers being pink to purple. The two species hybridize where their ranges overlap. It is also difficult to distinguish from W. schlechteri (Schlechter’s watsonia), which has narrower leaves and more heavily thickened midribs, and in the flowers; W. pillansii has staminode-like ridges between the lower parts of the filaments that W. schlechteri lacks.

The wide distribution of this species with some variation throughout its range has meant that it has been named several times. Its synonyms are: Watsonia archbelliae L.Bolus, W. beatricis J.W.Mathews & L.Bolus, W. masoniae L.Bolus, W. prioriiL.Bolus and W. socium J.W.Mathews & L.Bolus. Goldblatt in his 1989 revision, regards the many variations to be due to ecological, rather than genetic differences, and all share the characteristic staminode-like ridges between the lower parts of the filaments. 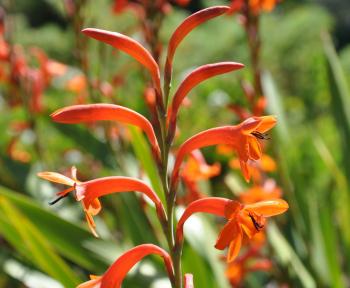 Watsonia pillansii flowers have no scent, are brightly coloured, are held up high on a sturdy stalk and produce lots of nectar, which indicate that they are pollinated by nectar-feeding birds such as sunbirds, although at Kirstenbosch, which is well out of its natural range, the local sunbirds are not seen visiting the flowers. The stamens and stigma are positioned in the right place, just underneath the uppermost tepal, to touch the bird’s head as it probes the flower for nectar.

Watsonia pillansii is also able to survive fast-moving grass or fynbos fires and although the plant is burned, the corms are unharmed and will resprout. Watsonias are well known for flowering prolifically after fires, but this one does not need fire in order to flower.

The seeds are light and winged and are shaken out of the capsule and dispersed by wind, but do not fall very far from the parent, so they tend to form large colonies.

Watsonia pillansii is a popular garden plant and a good cutflower, and is cultivated as a cutflower. Watsonia corms are said to be edible but sour tasting, tough and fibrous and are not recorded as being eaten by people. 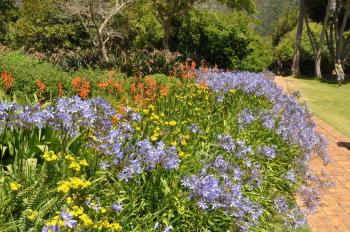 Grow Watsonia pillansii in full sun, in well-drained, well-composted soil with plenty of water all year round, particularly in summer. This watsonia is evergreen. Its main growing season is in spring and summer. It does not die back at the end of the growing season or during the winter months. As the outer leaves die off, they can be cut off to keep the plant looking attractive. It multiplies rapidly forming large clumps. It is tender to half hardy and needs protection from frost. It is suitable for coastal gardens.

Watsonia pillansii is very attractive grown in clumps in mixed beds or borders, rock gardens, retaining walls and terraces or on embankments. It is also effective mass-planted. It is perfect for interplanting with the smaller evergreen agapanthus such as Agapanthus praecox subsp. minimus ‘Adelaide’, they flower at the same time giving a very striking blue and orange display. It also looks good mixed with summer-flowering yellow-flowered shrubs such as Euryops tysonii  (Tyson’s Euryops) or Helichrysum cymosum  (gold carpet). It can be grown in large containers.

Propagate by seed or lift and divide the corms.

Sow seed in spring, in deep seed trays or seed beds, using as sandy mixture such as 50:50 washed sand and fine compost or loam. Fresh seed will germinate in three to four weeks. Allow seedlings to remain in their trays for two growing seasons before lifting and transplanting them. Transplant them in spring. Flowering can be expected from their third or fourth year.

Lift and divide the corms in late spring, just before active growth begins. Remove the old corms that stack up underneath the current corm and replant the current one (uppermost one). Remove any offsets. Reduce the leaves by half and replant immediately. Plant the corms 100 mm deep. Do not store the corms dry, they will dry out very rapidly if stored out of soil. Allow the corms to be left undisturbed for at least five years between lifting and dividing.