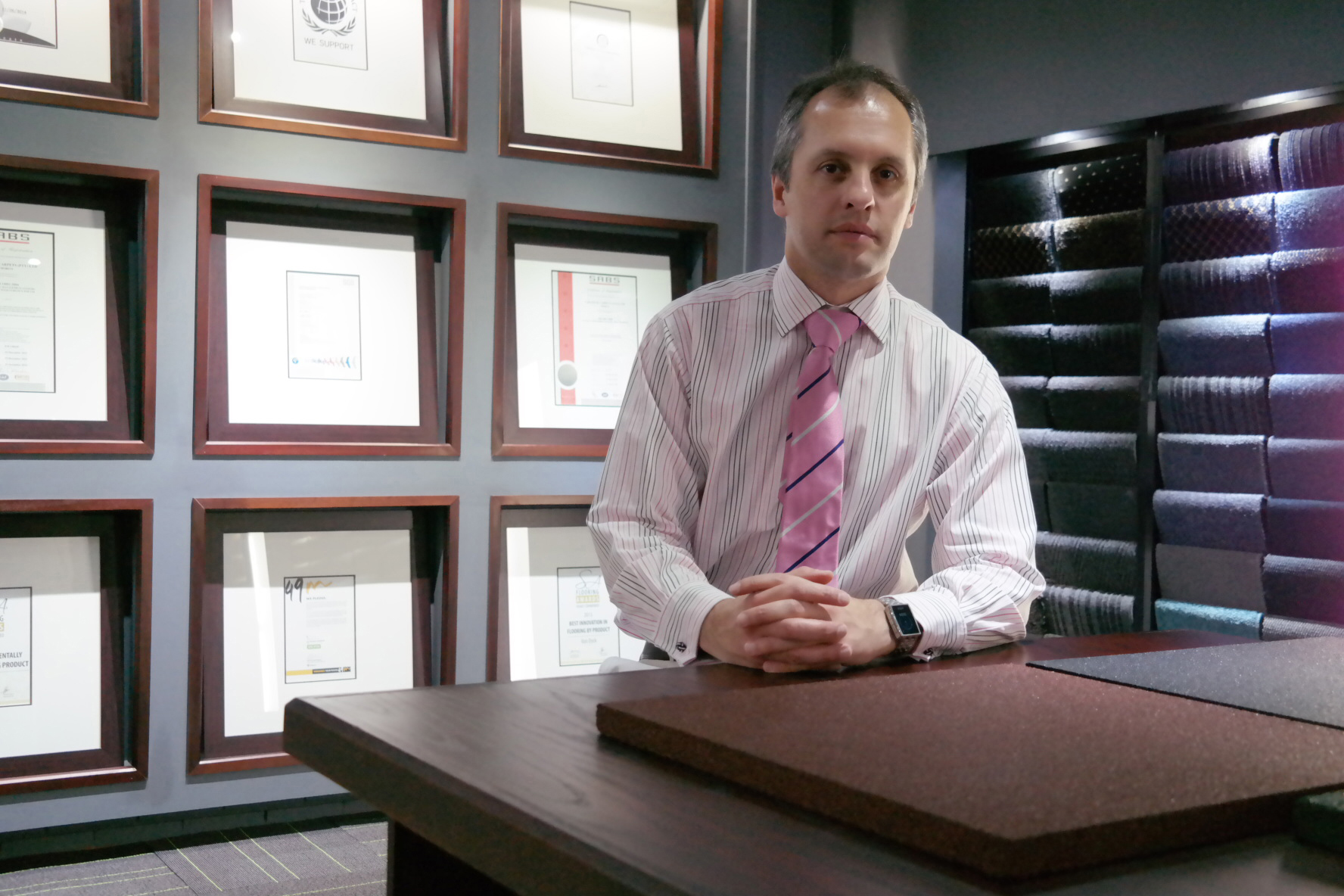 Rubber crumb is an end product that previously had little useful application, but PFE International CEO and Van Dyck Carpets director Dr Mehran Zarrebini says the requirement on businesses to develop sustainable products was a key challenge facing industry in the 21st century.

Not adopting environmental practices in the short-term would translate into the world’s demise. Companies ignoring that reality were forgetting the bigger picture, specifically environmental sustainability.

Critical in tackling global environmental issues was viewing compliance as an opportunity rather than only adhering to the lowest environmental standards for as long as possible.

“It is economically and consciously sound to comply with the most stringent rules before they are enforced. This yields substantial first-mover advantages in terms of fostering innovation,” Mehran Zarrebini said.

“In an increasingly environmentally aware society, consumers prefer eco-friendly offerings and are prepared to pay the premiums to secure them, offering businesses a competitive advantage in redesigning existing products or developing new ones,” he said.

However, creating a sustainable business model did not merely entail rethinking customer value propositions, but developing innovative ways for building revenue and delivering services in tandem with other companies.

Within Van Dyck this meant supplying the UK flooring industry with an acoustic underlay manufactured from rubber crumb as a result of the recycling from sister company Mathe Group. Mathe recycles truck tyres, breaking down the rubber to crumb and recycling the steel and Van Dyck converts the crumb into acoustic underlays used under soft and resilient flooring and acoustic cradles used in the built environment to eliminate variations in the structural floor surface and to accommodate services. Both products effectively reduce noise while being environmentally beneficial.

Van Dyck acquired a 49% stake in the Mathe Group in 2014 to secure a raw material supply and diversify its supply chain. Zarrebini said currently South Africa dumps 10 million tyres annually of which 48% are truck tyres, prompting the $1,5 million (R20 million) investment into a newly commissioned factory that began operations in March 2016.

In 2015 Van Dyck recycled approximately 40000 truck tyres. This would increase to 150000 with the new plant and the company was negotiating to divert the recycled steel to either a Germiston-based foundry or exported to South Korea for use in the shipbuilding industry.

Zarrebini said leadership must be shown from company directors in order to be effective in changing a company’s environmental approach and developing a low carbon economy.

The current economic system had placed substantial pressure on the planet while only catering to the demands of 25% of its inhabitants.

“Companies have to develop innovative solutions, but that will only happen when executives recognise the simple truth that sustainability equals innovation,” Zarrebini said.

The accreditation acknowledges organisations that take a best practice approach to measuring and managing their greenhouse gas emissions and achieving real reductions year-on-year. The company was now implementing the ISO 50001 accreditation.

Zarrebini said their initiatives had resulted in a 2,8% reduction in direct costs applied to company facilities and vehicles; 30% reduction in electricity and steam purchased and 12,2% reduction in environmental elements. This included purchased goods and services, capital goods, fuel and energy related activities, exports and distribution, waste generated from operations, business travel and employee commuting.

Additional savings came via transport and distribution processing of products sold; the use of sold products; end-of-life treatment of products sold; leased assets and investments with the total investment translating into a 55% reduction in PFE International’s environmental footprint.