A versatile, evergreen shrub for semi-shade, with attractive dark green foliage and eye-catching, large, blue-purple, trumpet-shaped flowers, occurring from summer through to autumn.

Dyschoriste thunbergiiflora is a fast-growing, much-branched, rounded shrub up to 1.7 m high, with a spread of 1.5 m. Leaves are mostly elliptic and entire, and the flowers occur in the leaf axils. One to four flowers can appear in an axil, termed an axillary cyme inflorescence. The beautiful purple-blue tubular flowers characteristically have a 2-lobed upper lip and a 3-lobed lower lip that is marked with deep purple spots and splotches in lines into the throat. The corolla tube, which consists of five petals, has four stamens and a curved style presenting the stigma just protruding at the mouth of the tube, below the 2-lobed upper lip. Flowering occurs through the summer months into autumn, from October to April. The flowers are followed by cylindrical capsules containing four seeds usually covered with water-absorbing (hygroscopic) hairs. 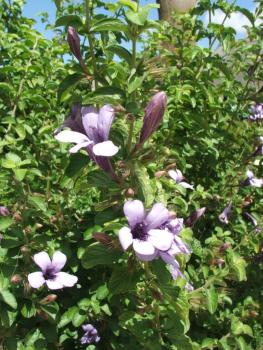 According to the IUCN Red List of Threatened Species 2015, Dyschoriste thunbergiiflora is widespread and common over much of its range, is not considered to be threatened, and is assessed as of Least Concern (LC).

Purple bells is cultivated in southern Africa, but is actually native to tropical Africa, occurring in Kenya and eastern Uganda, on forest margins and in Acacia–Commiphora and Combretum–Euphorbia bushland, often on stony soils or rocky hills. 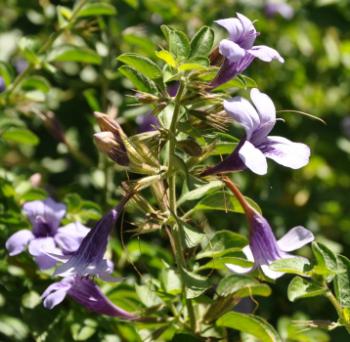 The Acanthaceae (pronunciation: ah-kanth-AY-see-ee) is a family of herbs, shrubs and climbers that are widespread in South Africa, but showing the greatest diversity in the high summer rainfall areas. The name Acanthus originates from the Greek, aikantha, meaning ‘thorn’, ‘spine’, or ‘spike’. Globally the family has about 350 genera and approximately 4 350 species, abundant in tropics and subtropics; 42 of these genera, consisting of 350 species, occur in southern Africa.

Acanthaceae genera can be identified by opposite leaves, inflorescences that often have large leafy bracts, irregular or 2-lipped flowers and fruits being roughly club-shaped, exploding capsules; seeds often have water absorbing hairs

The genus Dyschoriste (pronunciation: dis-kor-RISS-tee) originates from the Greek, dys meaning ‘with difficulty’ andchoristos ‘separated’; referring to the valves of the capsules which adhere tightly to each other. The species namethunbergiiflora means ‘with flowers like those of the genus Thunbergia’. It is frequently misspelled as ‘thunbergiifolia‘.

There are about 65 species of Dyschoriste in tropical and warm areas of the world and 11 species that occur in southern Africa, mainly in the northern and eastern provinces of South Africa.

Dyschoriste thunbergiiflora is pollinated by insects and attracts various species of butterflies. The insects attract insectivorous birds; therefore, this plant is a good choice for attracting life into the garden. The fruit is a small capsule that bursts open, dispersing the seeds by scattering them. 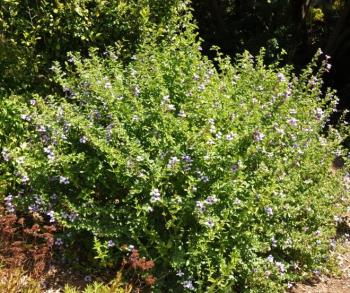 Purple bells is a fast-growing, colourful, evergreen shrub that can tolerate some sun during the day, but prefers semi-shaded conditions. It is a plant from a summer-rainfall climate that does well in a wide range of soils, and will thrive in the winter-rainfall areas as long as the soil drains well. Water well in summer, but much less in winter. It has lush foliage when it receives regular reasonable amounts of water, although it is quite hardy and can do alright with less. The plants are frost sensitive.

Feed generously. Lots of compost added to the soil before planting, will keep the plants lush and green. Plants require thick layers of compost applied as mulch and regular feeding with organic or chemical slow release fertilizer to perform at their best.

Regular tip pruning is needed for neat compact growth and to encourage more flowers. A once yearly, slightly heavier pruning will keep this plant sending out fresh growth.

This is an excellent decorative garden plant suitable for use in townhouse gardens, small gardens, Mediterranean- and cottage bed designs, showcasing mixed herbaceous borders. They do well, and look lovely planted near to water features or ponds. Also good for screening and informal hedging, as it responds well to pruning and shaping.

Purple bells is easily propagated from seeds, cuttings and layering.

The seeds must be collected before the capsules burst open, dispersing the seeds. This can be done just as soon as they start to turn brown. Sow in seed trays in a well-drained medium. Cover the seeds with sifted soil or sand. Keep trays in a warm sheltered area until germination occurs. Prick out the seedlings and pot them up when the first true leaves are well established. Grow on untill ready to transplant into the garden.

Layering is also an easy method of propagating this plant, because it roots along the ground as it grows and spreads. Bend a few branches, remove the leaves from a section of each branch then bury that under a layer soil; peg it down if necessary. Keep the soil moist until rooting. When the roots are well grown, lift the rooted runners and plant into individual containers. Water with care untill the plantlings recover, grow on to plant out.

Softwood cuttings can be taken from new growth in summer. Place in a suitable rooting medium, use appropriate rooting hormone powder to increase success. Keep in a warm sheltered area until rooting occurs, which can be expected in 4 to 6 weeks, after which they can be potted up and grown on.