Kleinia chimanimaniensis is a sprawling shrublet with succulent leaves and stems and scented yellow flowers, in summer. It is confined to cliffs of the Chimanimani Mountains and the Nyanga District of eastern Zimbabwe. 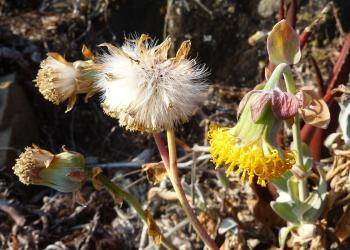 Kleinia chimanimaniensis resembles K. galpinii from Mpumalanga, and accordingly in the past have been wrongly identified. In both species the leaves and stems are glaucous, covered in a powdery bloom. However, K. chimanimaniensisgrows taller (up to 600 mm) with longer stems and without a tuber, nor the distinctive basal rosettes of K. galpinii. It also differs by its inflorescence which is less branched with nodding, 1–5 capitula,  in contrast to K. galpinii that are only nodding in bud. K. chimanimaniensis flowers are distinctly yellow, whereas orange in K. galpinii, with smaller corolla lobes up to 1.5 mm long, and cordate bracts on the peduncle.

This species is newly described and its Red List status has not yet been evaluated, however in the author’s opinion it is not threatened as it is common in its range and does not face any threats. 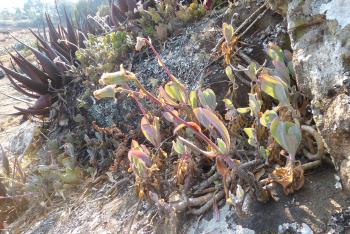 Kleinia chimanimaniensis is widely distributed along the Chimanimani Mountains and the eastern highlands at Nyanga, from about 450–2 000 m in altitude. The habitat consists of montane grassland and savanna. Plants grow on sheer cliffs or rocky terrain. On cliffs and steep slopes, the branches becomes pendent. Along the Chimanimani Mountains the plants grow on quartzitic, mineral-deprived sandstone cliffs and boulders, exposed or in partial shade. On the southern end of the Chimanimani Mountains, in western Mozambique, the plants grow on steep north-western slopes and cliffs in savanna together with other succulents such as Aloe ballii, A. haronii, A. cameronii and A. chabaudii, Rhipsalis baccifera, Sansevieria hyacinthoides and Zamioculcas zamiifolia. Other plants sharing the habitat include Cryptostephanus vansonii, Dietes iridioides, Harungana madagascariensis, Uapaca kirkiana, Englerophytum magalismontanum, Ficus muelleriana and F. craterostoma. During the dry season the lower leaves wither and becomes deciduous. The climate is warm and humid in summer and cooler in winter, where frost is absent or a rarity. Rainfall in its habitat is high, about 1 000–1 500 mm per annum, and usually in the summers months. Plants also experience regular fog in the summer rainy season.

The genus Kleinia was named by Linnaeus in 1737, after the German zoologist, Jacob Theodor Klein (1685–1751), at Danzig, a lover of plants.  This species is named for the Chimanimani Mountains in eastern Zimbabwe and western Mozambique, where its main population grows.

Kleinia consists of about 40 species, which are widely distributed in Africa Madagascar, tropical Arabia and Yemen, India and as far east as Sri Lanka (Halliday 1988). There are a number of species in southern Africa of which K. cephalophora is the only species confined to the winter-rainfall area. Most commonly grown in South Africa is Kleinia fulgens. Other southern African species include K. garciana (Zimbabwe), K. longiflora, K. venteri and K. stapeliiformis. K. longiflora has a wide distribution extending to tropical Africa.

The conspicuous scented flowers are pollinated by insects, such as butterflies. After fertilization the capitulum matures, becoming erect, opening from the end and the fine seeds are dispersed by wind.

Apart from its ornamental use, no other uses have been recorded.

Like most of the species of Kleinia, K. chimanimaniensis grows well in cultivation. This plant is a fast grower and should thrive in both grassland and warm, moist bushveld gardens in southern Africa or dry Mediterranean-type gardens in other parts of the world, where frost is not too severe. Plants prefer full sun to partial shade. Kleinia chimanimaniensis can be grown in containers and rockeries. In a cold climate it is best in clay pots in a greenhouse, in bright conditions, however, plants will tolerate some shade.

Kleinia chimanimaniensis is easily propagated from cuttings or seed. Stem cuttings can be taken during spring or summer. Cuttings are best rooted in a small container in a well-drained medium such as sand, kept moist. Rooting is rapid. Plants should flower within the second season.

Sow seed preferably during spring or summer in a shady position in a sandy, slightly acidic soil. Cover with a thin layer of sand and keep moist. Flowering size can be reached in about 2 to 3 years. Best to feed plants with an organic fertilizer, compost or liquid fertilizer.