Plant of the week: Lycium afrum 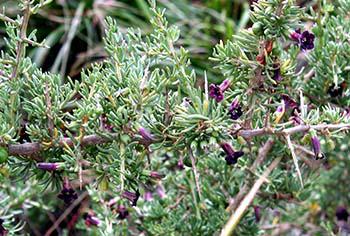 Coming from an economically important family of flowering plants, this is a robust, stiffly branched, moderate sized, thorny shrub, that may grow to be a small garden tree.

A thorny and stiffly branched shrub or small tree, that grows to a height of 2–3 m. The bark is pale creamy brown; branchlets armed with rigid spines 1-4,5cm long, often bearing the leaves and flowers.It has succulent-like, grey-green leaves, that are leathery and linear-oblong, 11–24 × 1–2 mm, tufted on short shoots and spirally arranged. 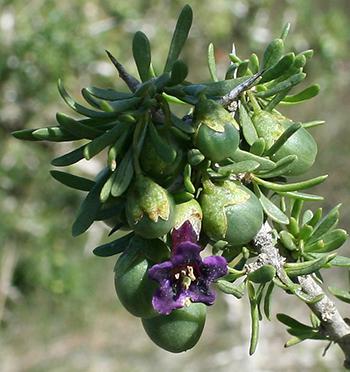 The tubular flowers are solitary, vary from white, mauve and purple, about 12–20 mm long, with the petal lobes surrounding about a quarter of the mouth of the flower; stamens inserted halfway up the tube and enclosed inside it. Flowering is in winter and spring, from July to October. The fruit is a nearly round, green, fleshy berry, ripening to orange red, then black in early summer, between October and November.

According to the website https://redlist.sanbi.org, checked on 18 March 2016, the conservation status of this plant is Least Concern (LC). There are no known threats to the species and the last assessment of this plant was done 2005/06/30. 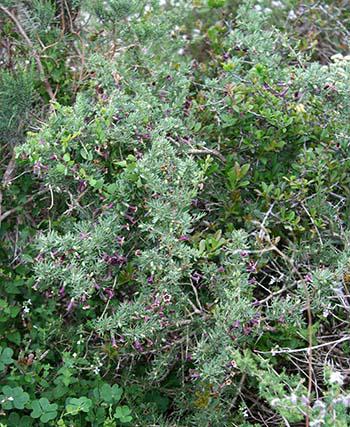 Lycium afrum is native to the Western Cape Province. It is found mostly on sandy, coastal flats and in shale renosterveld, from Lambert’s Bay to Caledon.

The genus Lycium, pronounced ‘Ly’cium’, comes from the Greek word lykion, the name for a thorny tree with juice and roots used medicinally, from Lycia, a South-West region of Asia Minor. The species name afrum means ‘African’ or ‘of’ or ‘from Africa’, where this species originates.

Lycium is made up of about 100 species that occur in warm temperate regions throughout the world, but especially in the Americas. There are 23 species in southern Africa, which are widespread in all regions.

The flowers of this family are self-pollinating, but attractive to many insects, mainly ants. The berries are eaten by birds, who also disperse the seeds.

Lycium are browsed until the spines in the new growth hardens. They often form dense thickets and increase on land that is overgrazed. Their thorns also give protection to other plants that grow among them. 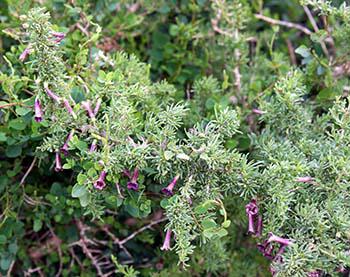 According to Wikipedia, plants of the genus Lycium have been known to European herbalists since ancient times, and species were traded from the Far East to Europe by the Romans, for example via Ariaca and the port of Barbarikon near today’s Karachi, as mentioned in the Periplus of the Erythraean Sea. In his Naturalis historia, Pliny the Elder describes ‘boxthorn’, a common name for many species, as a medicinal plant recommended as a treatment for sore eyes and inflammation, as well as does Pedanius Dioscorides in his P. Dioscoridae pharmacorum simplicium reique medicae.

There are no records for this species being used medicinally in South Africa. The fruits are said to be edible, but other species are poisonous; so they should be treated with caution. In earlier times the thorny branches of many Lycium were used to make cattle enclosures (kraals) to keep stock animals safe from predators at night.

Lycium afrum makes a good garden subject. This plant may be used for security against a fence because of its thorny branches. Its bluish purple flowers make a nice show when they fill the bush during the flowering season, followed by the attractive berries that will give their own show once the flowers are finished. This plant will do well in full sun, it is tolerant of winds and drought, and will tolerate sandy soils.

Most species from the Solanaceae family grow easy from seed. This plant produces fleshy berries and the flesh has to be cleaned off before the seeds can be sown and germinate easily. Seeds can be sown under greenhouse conditions in Spring (August-October). It will also very easily grow from suckers. It is unclear if both sexual and vegetative reproduction would occur in a naturalised situation.