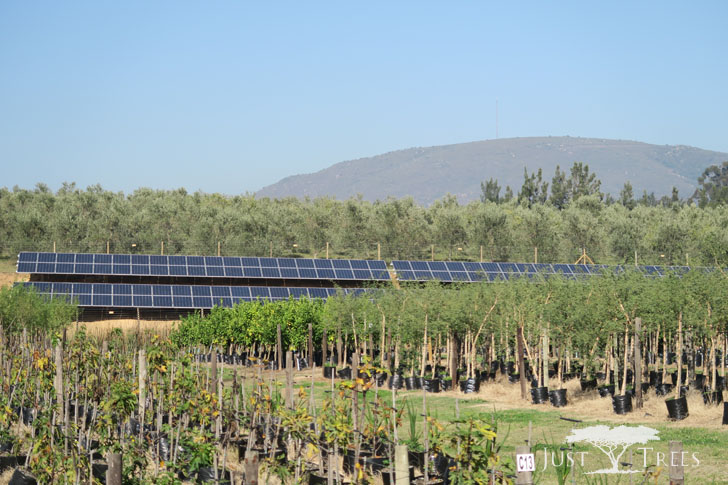 At Just Trees we have always been mindful of the positive and negative environmental impact that the running of our business has. Actions speak louder than words and we started addressing the negative impact by committing to becoming a Carbon Neutral company as early as 2010. Electricity usage was a major contributor to our carbon footprint and this is where the idea of solar power started gaining traction. The “load shedding” crisis of the 2013/14 season was the proverbial “nail in the coffin” and spurred us into action.

It started with a visit to a wine Estate that had installed a PV system in 2012 and information/tips were garnished from one of the Estate owners. Just Trees then initiated discussions with Solar System companies and a detailed impact assessment was conducted, including the following:

The following solution was put forward for consideration:

However, after reading an article about farmers pumping water from the Orange River in the Northern Cape using only solar power and Variable Speed Drives (VSD’s), the question begged whether this solution, coupled with the input from current Municipal electricity could be considered. Consultation with VSD manufacturers confirmed that the VSD’s could be operated utilising both DC (Solar) and AC (Municipality) to drive the pumps together with a power management system (which would prioritize the available DC energy and use the AC to supplement the shortfall during non-peak solar periods).

After analysing the costs and benefits, we decided to go with the following solution:

The added advantage that the VSD provides is that system operating pressure can be kept at a constant by regulating the speed of the pumps motor. By adjusting the required system pressure (reference pressure) while irrigation is being performed in order to meet the actual required system pressure, this unlocks additional power savings thus optimizing the consumption of power.

VSD’s coupled with Solar PV solution for the pumps would amount to direct savings from installation of the VSD’s  and the additional savings attainable from direct feed of the Solar PV system to the VSD’s.

Having finally decided on a solution that we felt was best suited to our needs, we decided to partner with RenEnergy to design and implement the system for us.

To conclude, the system will have the following benefits to our business:

Since installing the VSD’s, we have already noted a 25% reduction in power needed to pump each liter of water onto our trees. We will be measuring PV electricity output over the next year to quantify exactly what the savings will be.

Just Trees is a wholesale tree nursery specializing in container grown trees. Just Trees works with landscape architects and landscape contractors who plant our trees knowing that they will contribute to their design becoming a reality. Contact: Carl Pretorius Tel: 021 871 1595 www.justtrees.co.za