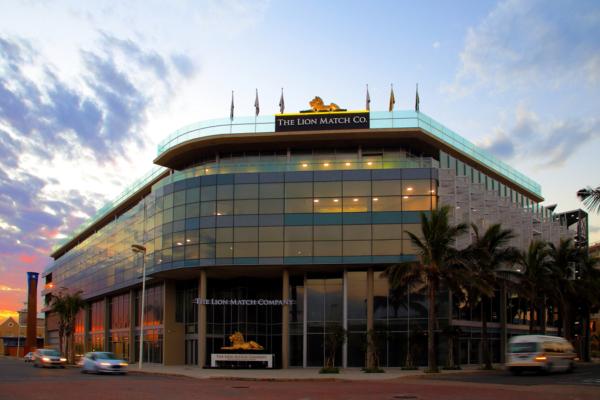 The iconic Lion Match factory in Durban has received a makeover and now boasts a mix of old and new brickwork.

The factory, which sits alongside Kings Park Stadium and is near the iconic Moses Mabhida Stadium, is considered to be one of the city’s memorable architectural landmarks. A two-year process of rejuvenation has now been completed.

In 2013, JT Ross announced its intention of rejuvenating the former match factory and converting it into an office park. The refurbishment was set to create 24 000m2 of office space and offer the critical mass to include nice-to-haves such as a coffee shop, outside eating areas and on-site medical and health facilities as well as a three-storey parking garage.

The remodelling was set to include replacing windows and installing modern-day technology such as energy-saving lighting and air conditioning.

In addition, the main building would acquire a small roof garden with two courtyards, indigenous landscaping and a tree-lined entrance will extend the sporting green belt that includes the Durban Country Club, equestrian and adjoining sports fields, as well as the Moses Mabhida Stadium and the Kings Park Stadium into the Umgeni Road environs.

In March, Grant Smith, JT Ross’ development director said: “The thing about Lion Match is that it is a landmark of significance. The Lion Match factory premises have a long history…The factory itself is gone, but the new clean-looking office park designed by Dean Jay Architects is attracting major tenants with virtually no promotion.”

In a statement issued by Corobrick, it says rejuvenation of the site, which is situated on Durban’s inner city fringe, began under the guidance of Dean Jay Architects, one of the tenants already based at the premises.

The process had to be carefully monitored as the ex factory is listed as an Amafa heritage site. As a result, the architects opted to blend the old and new buildings seamlessly, yet add distinguishing features.

Sarah Fourie of Dean Jay Architects says the bricks used in the refurbishment were a mixture of reused old bricks from one of the demolished warehouses, alongside Corobrik’s range of terracotta satin face bricks and burgundy pavers.

“We wanted to match the newer bricks with the older ones while playing with different brickwork styles throughout,” she explains. “We highlighted the new additions as obviously modern rather than trying to repeat the traditional design. While the new additions are modern, we have used the same colours and materials that were used in the original buildings.”

The interiors of the existing buildings have retained the industrial, factory design with exposed trusses and clerestorey lighting. The internal face brick has been painted in shades of white and grey which introduces different textures while staying in keeping with the industrial feel.

The older buildings have also retained the original English bond brickwork pattern on the plinth which correlates with a number of the signature building aspects such as the “signage walls” which have been constructed using reused old bricks.

“We wanted to sustain what we could from the old structures but have made the style quite obvious in the newer structures,” explained Fourie.

The Lion Match Company was established more than 100 years ago and now boasts a range of personal grooming products in addition to its well-known matches. It is owned by the Fasic Investment Corporation, which was bought by Nedbank around a decade ago.