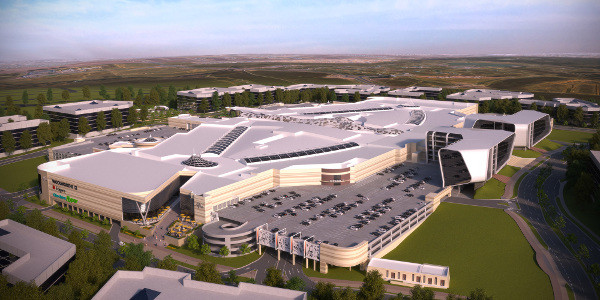 The new ZARR5 billion landmark, developed by one of South Africa’s property developer and investor is situated in Waterfall City, with access from Pretoria, Sandton and Johannesburg.

Commenting on the Mall of Africa development, Louis van der Watt of Atterbury says developing a super-regional mall in the heart of the fastest growing urban node on the continent presented the opportunity to create an exciting modern landmark.

“As the heart of a growing city, its connectivity was a key consideration of Mall of Africa’s development. Its exceptional scale, design, location, retail mix and access creates an exciting asset and places it at the forefront of retail developments,” says van der Watt.

Atterbury Property Development’s James Ehlers notes that accessibility for shoppers was a key factor in the mall’s development.

“Easy access from Gauteng’s transport network is an inherent advantage of Mall of Africa,” says Ehlers.

“Excellent accessibility is crucial for the success of any shopping centre. For a super-regional shopping centre the size of Mall of Africa, this means creating the best access for shoppers from across an entire province and even further afield. It is a massive undertaking.”

This attention to accessibility detail has successfully placed Mall of Africa at the hub of major transport routes for shoppers coming from the north, south, east and west.

Mall of Africa is located a stone’s throw away from the first free-flow intersection of its size in Africa at the nearby Allandale Road exit from the N1 Highway. This provides ideal access for shoppers travelling from the north and south to this iconic new mall. It is also mere minutes away from the major east, west, north and south highways meeting at the Buccleuch interchange of the N1, M1 and N3.

In addition, the massive road upgrades Atterbury has undertaken as part of the Waterfall City development ensures getting to Mall of Africa is easy for shoppers and improves the infrastructure for all road users.

The new ZAR160 million Bridal Veil Road overpass bridge, developed by Atterbury Property Development, will open at the same time as the mall and create a brand-new east-west transport route.

The new bridge crosses the N1 highway south of the Allandale Road interchange and north of the Buccleuch interchange. It creates a direct link between Midrand and Waterfall City with the new R40 million, 1km S-bend dual carriage way extension to Bridal Veil Road, which will take shoppers right to the doors of Mall of Africa.

The bridge’s superstructure is 115.8 metres long and 22.7 metres wide. It will carry four lanes of traffic – two in each direction – a pedestrian walkway, a cycle lane and a raised centre median.

In addition, road infrastructure was substantially upgraded on Maxwell Drive, to the west of the mall, where increased capacity was created at the intersections. The existing traffic circles were upgraded to signalised intersections at a cost of ZAR17 million.

Together the new road and bridge infrastructure create convenient route right through Waterfall and its surrounds. The Bridal Veil Road extension begins from Allandale Road at a new signalised intersection east of the N1 highway and Pretoria Main Road. At Mall of Africa, the new road connects to the upgraded access route of Maxwell Drive, via the Simlak Drive link road. Then Maxwell Drive goes on to link with Woodmead Drive to the south and Harry Galaun Drive to the north.

“The new highway overpass bridge, link road and the upgraded Maxwell Drive open important routes that will make travelling easier and faster for the growing number of people who live, work and shop in the area. The excellent quality of road infrastructure and landscape architecture that benefits Mall of Africa and Waterfall City also extends to everyone who uses the roads and highways in and around Midrand and Sandton,” says Ehlers.

Mall of Africa was also developed with visitors and tourists travelling by bus in mind.

So, whether you drive, cycle, walk or make use of bus or taxi, getting to Mall of Africa is easy.

Atterbury Asset Managers is responsible for Mall of Africa’s asset management for its co-owners.