Worms do the dirty work for composting entrepreneur Phumlani Dlongwana 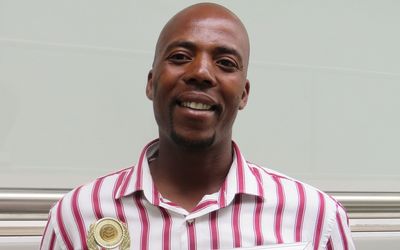 EVERY year, 2-million tonnes of food waste is dumped at landfill sites in Cape Town. Each tonne generates two tonnes of carbon dioxide, which contributes to climate change, and the toxins can leach into the soil and contaminate groundwater.

Phumlani Dlongwana is seeking to tackle this, create jobs and make a profit. He runs Waste to Food with business partner Roger Jacques.

“We receive food waste, manually chop the food items into smaller pieces, manage the earthworm hammocks, harvest the compost, dry and sieve the compost (to ensure no small rocks and twigs are included) and then bag it,” he says. “By turning waste into compost, we are saving the planet, a bag at a time.”

It has been a long journey to get to this point. Growing up in a small village in the Eastern Cape, Dlongwana always had big plans for his future. “I told everyone I wanted to become the president, but when I was much older, I wanted to become a social worker,” recalls the 35-year-old father of four. “I had a passion for wanting to help people, but, unfortunately, my family could not afford to send me to university.”

Dlongwana spent a few years recycling bicycles for a cycling empowerment network, a project created to help black people start their own businesses. He also worked as a bicycle mechanic, started a cycling club and helped cyclists during large races.

He then went to work for Full Cycle, which provides earthworms for worm farming, where he gained the knowledge to start Waste to Food.

When the business was launched in 2013, it was difficult to find start-up funding to build the worm hammocks and to locate a site large enough to rent at an affordable price. The business received funding from some donors and a lease at the Philippi Fresh Produce Market, owned by the City of Cape Town.

Another challenge was Dlongwana’s lack of business skills. He studied through the Small Business Academy, an intensive nine-month course offered by the University of Stellenbosch Business School.

The programme, now in its third year, offers workshops and lectures in financial and business management, labour legislation and human resources issues, marketing, customer service, and the use of social media.

Each participant is mentored by an alumnus of the University of Stellenbosch Business School.

“It was a dream come true to be able to study,” Dlongwana says. “I learned so much in terms of planning ahead, writing a business plan, and how to approach funders that you need to grow your business.

“I also realised that you need to know every detail of your business — your market, your competitors and your end-user — or else you will not realise the potential, the areas of improvement, or the opportunities.”

After completing the course last year, Dlongwana was honoured with the award for Business Most Likely to Succeed.

“I was overwhelmed,” he says. “I never thought that my business was seen as such a success. It was a joyful but humbling experience to receive this award.”

He has big expansion plans. Waste to Food currently has 10 worm hammock units and processes fivetonnes of compost a week.

The partners hope to secure funding to purchase a hot-rot vessel composting system and expand their worm hammocks to 30, which will increase capacity to four tonnes of food waste a day.

The business is also looking into a process for collecting waste water that, after treatment, can be used to irrigate an organic vegetable garden.

But more than just saving the environment, Dlongwana wants to help people too. Because poverty and unemployment are such a problem in SA’s townships, he wants to use his business to create jobs and so also make a difference in other people’s lives.

“Once we have secured the last of the funding needed to create 30 micro-franchises, we will supply earthworm hammocks to these owners to manage and run their own business,” Dlongwana says.

“We will then purchase the compost from them. Each owner will be employing an additional two to three people so the number of jobs that we can create is quite substantial. This will also create valuable environmental awareness and education in our community.”

Dlongwana says he would also like to start a day-care centre. With so many children on the streets, and their parents either working or not in a position to take care of them, he wants to offer a safe place in which the youth can receive education and food.

“Growing a business doesn’t happen overnight,” he says. “You have to take it step by step.

“You have to have a passion and put everything you have into it. And without knowledge, you are not going to get far, so use every opportunity to learn.”