Gardening with Ali Marshall: Drought tolerant plants with a touch of the Mediterranean 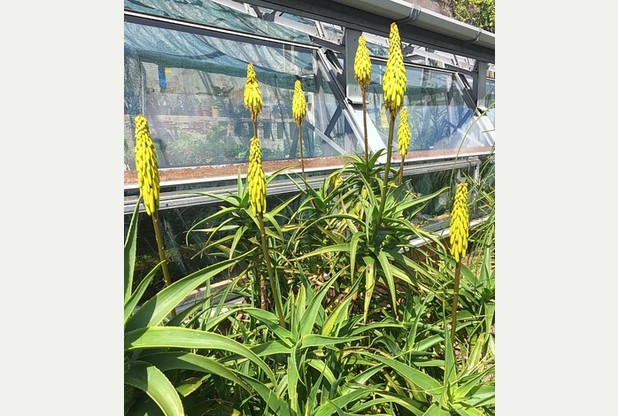 WHY IS it my memory of recent weather is of dullness, dampness and rain yet at the first sniff of sunshine my garden is dry as a bone?

Despite the June record-breaking rain and Wimbledon (both London based), our sprinklers are out and working hard already trying to keep the dahlias from flopping and the roses from going over at record speed.

Last week I was concerned about mildew on roses due to the humidity; this week the garden is littered with hosepipes. Climate change is leaving its mark now on a month by month basis and it is keeping me busy trying to predict and plan for the next extreme, especially as I have very free draining and sandy soil.

The only answer, really, is to make sure I have put the right plant in the right place, try to give it the right kind of care, mulch where suitable and then cross my fingers and toes.

So, for example, there are areas in Torre Abbey that, apart from new plantings, are never watered by us and have to rely totally on making the most of any available rain.

Populated by groups of plants which are known to be drought tolerant, our ‘xerophytic’ (dry landscape) border is crammed full of South African daisies and spiky rosettes from the deserts of Mexico, prairie grasses and ground hugging alpines.

They thrive in our mild climate, rarely having to deal with anything more than a degree or two of frost and seem admirably suited to coastal gardening. If your garden soil is shallow, sandy, poor and nothing like the rich loam which books talk about or washes away down your steep hill in every heavy rain shower then do not despair — there is a solution.

Local gardens are often full of these kinds of plants so sometimes it’s easy to forget how extraordinary many of them are and how lucky we are to be able to grow them.

Usually I am only reminded when in conversation with a visitor from elsewhere, lusting after our agaves or aeoniums; with me it’s cool ferneries and woodland glades which I long for, precisely because the conditions in Torre Abbey Gardens can never support this style. The grass is always greener… apparently!

Drought tolerant plants are much more varied and interesting than one would imagine. As well as the obvious desert style plants, like the succulents, it is also worth looking at the shrubs and perennials which cover the rocky slopes around the Mediterranean (known locally as the ‘garrigue’ or the ‘maquis’ if there are trees like pines in the mix).

Add to this the South African fynbos plants, original home of the pelargonium ( geranium to you and me) and the South American and Australian grasslands and you should find enough plants to inspire and stimulate the creative juices, and make life and your garden just a little bit easier.

Plants like this are an excellent choice if you have any sort of dry, rocky bank or steep sloping garden, especially one facing the sea and the heat of the midday sun, but they are also useful around your patio, as this is often an area in maximum sunshine.

Many also love life in a pot and will take being forgotten about or left untended while you jet off on your summer holiday. I can’t give you a complete list of all the available plants, but I will try to give you a good spread of possibilities in the small space I have available.

So let’s begin with the succulents. I have talked previously about the wonderful aeonium family so I will just say again: great plants. Get some. The dark burgundies and blacks of Aeonium atropurpureum and A. ‘Swartkop’ are always achingly stylish and their rosettes are eye catching, whether individually planted in a pot or as a forest of angular tree shapes topped by windmills.

Those species which flower put out tall, heavy looking flowerheads and are guaranteed to impress your neighbours. Possibly not the most beautiful, but fascinating nevertheless.

Alongside these the bush aloes of South Africa always look good. Their extra bulk will cover the ground well while the flowers, resembling red hot pokers, come in a variety of vibrant colours — yellow through orange to red.

The two most reliably hardy are Aloe striatula, which forms a metre high clump, producing yellow flowering spikes, and the lower mat forming A. aristrata, often found in the rockery section of the garden centre. This is much less impressive, but useful ground cover and if it flowers will put out lovely salmon pink spikes.

In Torre Abbey Gardens we have several other aloes outside, which thrive in the majority of our winters, sheltered and warmed by rocks and planted in very free draining soil to avoid rotting. Aloe ciliaris, A. mitriformis and even A. vera, herbal remedy for just about everything, have done really well the past few years.

Admittedly leaving the Aloe vera outside was a mistake as it is supposed to need temperatures above 10 degrees but it was in a very sheltered spot and did fine — plants don’t read books, don’t forget.

If you want to be really brave and avant garde there are some cacti which are hardy. Mostly they come from the Opuntia family (the bunny ear cacti), but there are others you might prefer. In truth many deserts have very cold nights even though it is scorchingly hot during the day.

This is the kind of push-the-boundary gardening which suits some people, but not everyone and you do need to do a bit of research on species first. You will also have to be prepared to provide some sort of protection against too much winter rain so you will probably need to stock up on bubble wrap or a lot of umbrellas!

Slightly dehydrated cacti cope better with the cold than plants full of water.

If cacti aren’t your thing then the agave family make a good substitute.

Statuesque and dramatic plants, they are especially good on a slope, where their shape can be admired from a distance, thus avoiding any contact with the sharp spines. The most common is Agave americana, with its blue green colour and my experience is this is the hardiest of the lot, but you can also try A. ‘Mediopicta’, which has a central yellow stripe down each shapely leaf, or my personal favourite A. americana ‘Marginata’, elegant and cool with creamy yellow margins.

Over time they will grow to rosettes around two and a half metres across, flowering after around 30 years (not the ‘century’ their common names implies) before dying with the sheer effort of producing a six to seven metre tree shaped flower stalk which is seriously impressive, if not exactly beautiful.

If space is an issue there are also some smaller puyas from Chile which have a similar look and great flowers eventually but are unfortunately even more vicious, the curved spiny leaves having a reputation for trapping small animals.

Since I am running out of space, and I have to get to work and prepare for Britain in Bloom judging next week, I think I’d better stop at this point and say… to be continued.