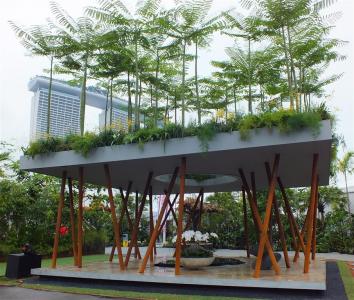 Maui or a meadow?

This country has been represented several times at the two-yearly festival, considered Asia’s premier flower and garden show.

The team of Kate Hillier and Dan Rutherford won the People’s Choice in 2014.

However, this is the first time two landscapers from New Zealand will be demonstrating their skills.

Wellington-based Bayley LuuTomes (34) is no stranger to international competition, having created show gardens in Japan, France, England and the United States.

His successes started when he was a Wellington Open Polytechnic student, winning the emerging designer category at the Ellerslie International Flower Show in Christchurch in 2013.

The following year, he was back in Christchurch, where his Take a Second Look was designed to raise awareness of children with arthritis.

It won silver for design and gold for lighting then, pitted against other lighting winners, took the Supreme Award for Lighting.

For the Singapore event, Mr LuuTomes is working with South African Leon Kluge, their third international event under the KlugeLuuTomes Design banner. The pair hope to repeat last year’s success in the United States where, at the Philadelphia Flower Show, they won the award for best landscape garden. That led to the invitation to the SGF, as one of the organisers was talent-spotting in Philadelphia.

At least they won’t be working in the snow, as they did in the US, but Singapore’s tropical climate throws up its own challenges.

Quite apart from creating a meadow-themed garden more than 8400km from home – 10,000km in Mr Kluge’s case – there is the issue of getting the right plants for the effect they want.

They have opted for a combination of temperate and tropical plants.

Seed of cooler-climate varieties was sent to Singapore earlier this year.

“We’re crossing everything we’ve got that they’re in flower in July,” Mr LuuTomes said, adding, “We’re not making it easy for ourselves.”

They are working with an implementing partner, Eco-Scape Maintenance, whose role is to erect structures under their direction.

They met for the first time in March and Mr LuuTomes is confident that the work will be done just as they want it.

Skype was getting plenty of workouts, he said.

Their landscape design will compete against those of other international designers, including Andrew Wilson and Gavin McWilliam of the United Kingdom, who took the supreme award at the 2014 SGF.

Mr LuuTomes may have an advantage in having exhibited at other international events but for Adam Shuter, of Auckland, Singapore is his first foray overseas, although he created numerous winning designs at the Ellerslie International Flower Show, (EIFS) first in Auckland and later in Christchurch.

His entry is in the fantasy section and Amozonia Landscape Pte Ltd is his implementing partner.

Mr Shuter’s invitation to the SGF came through Kate Hillier, who – as well as an international judge, had been Ellerslie’s manager – was asked by SGF organisers to recommend a New Zealand designer.

He described his garden, entitled Modern Day Maui, as “exploring the legends of Maui, with a contemporary design aesthetic”.

It will reflect how Maui would live if he were alive today.

Unlike Mr LuuTomes, Mr Shuter is not fazed by having to use tropical plants.

Before establishing his Auckland business, he worked for Kerikeri tropical plant specialists Palmco, so he was familiar with many Southeast Asian plants and confident about his choices.

However, it had meant travelling to northern Thailand, to source them.

Plants were shipped to Bangkok, then Singapore to be grown on for the Singapore festival.

For the men, expenses are met by the SGF, so all three went to Singapore four months ago to check the venue, Gardens by the Bay, meet officials and link up with their implementing partners.

Most landscaping businesses are one-person or have small staffs, so how to keep it going while overseas can be an issue.

Mr LuuTomes acknowledges that it had been a problem when he was “a one-man band” but he now had “a great support team back home”, meaning the business would operate as usual for the month he would be in Singapore.

Mr Shuter, who employs nine people, admits it “takes a lot of planning” to be away from Auckland for a month but “it’s a privilege to be doing what I’m doing”.

Adam Shuter is hoping that, after the Singapore Garden Festival, he’ll be able to pack the key elements of his creation and bring them home. This will enable him to re-create Modern Day Maui at the New Zealand Flower and Garden Show, being staged at Bastion Point, Auckland, from November 23 to 27.

The Singapore Garden Festival, Asia’s premier garden and flower show, will be held at Gardens by the Bay, from July 23 to 31.

Visit www.singaporegardenfestival.com for more on this event.