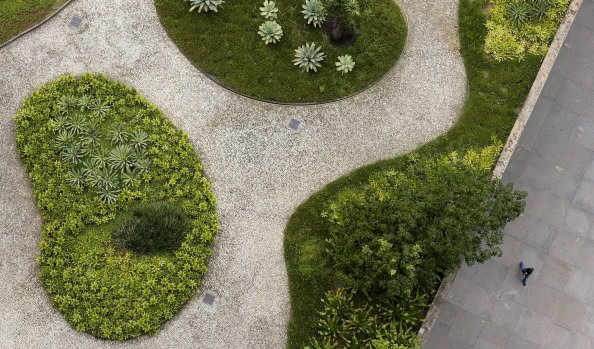 by Martin FillerIn our ecologically conscious times, melding man-made structures with their natural surroundings is considered among the highest goals of architecture. Oddly, though, few 20th-century architects sustained long-term creative relationships with landscape designers. Apart from Gertrude Jekyll’s classically proportioned but romantically dishevelled garden designs for the country houses of Edwin Lutyens in pre-World War I England, and the crisply delineated schemes of the American mid-century modernists Thomas Church (for the residences of William Wurster in the San Francisco Bay area) and Dan Kiley (for Eero Saarinen’s commissions in the midwest and east), few approached the magnificently co-ordinated achievement of two like-minded Brazilians: the master builder Oscar Niemeyer (1907-2012) and his horticultural counterpart and close contemporary Roberto Burle Marx (1909-1994).

More than anyone else, Burle Marx – who is now the subject of an exhibition at New York’s Jewish Museum – freed horticulture from restrictively conventional European precedents and ushered his discipline into a new age of regional appropriateness on a global scale. When colonists from England, France, Holland, Spain and Portugal established foreign outposts, they brought their native horticultural traditions along with them, and attempted to replicate those garden formats on foreign soil with roses, tulips, boxwood and other temperate plants brought from home. The rectilinear formality fashionable in 17th-century European gardens persisted long afterwards abroad and was reinforced during the Victorian period by a resurgent rigidity.

It was this conformity and extraneousness Burle Marx rebelled against with his ebullient hallmark motifs – sweeping monochromatic beds of vividly coloured, tightly packed blossoms reminiscent of isobars on a weather map, or graduated stands of ferns, cycads, and palms grouped to mutually enhance their vigorously sculptural silhouettes. Inspired by avant-garde directions in modern art, these innovations were also enabled by the wider interest in flora brought back to Europe from South America, Africa, Asia and Australia. It took Europeans’ huge enthusiasm for these exotic specimens (aided by improvements in greenhouse technology) to make the inhabitants of other continents fully appreciate their own native plants, a cultural transference central to Burle Marx’s epoch-defining career.

In view of the recent upsurge of interest in Latin American art and design in American museums, it is fitting that the foremost Latin American garden designer has come up for re-evaluation. The current Jewish Museum show, Roberto Burle Marx: Brazilian Modernist, appears a quarter-century after MoMA’s 1991 retrospectiveRoberto Burle Marx: The Unnatural Art of the Garden, which was curated by William Howard Adams and was the first time that institution had mounted a one-person show on a landscape architect. However, the new exhibition, in its eagerness to advance its subject as a multi-media polymath – Burle Marx also created, with varying degrees of success, sculpture, jewellery, textiles, stage sets, and stained-glass windows, too much of which is on display here – is wholly inadequate in conveying his revolutionary accomplishment in garden design.

Burle Marx was born in São Paulo in 1909 to a German Jewish immigrant father and a Catholic mother of French and Portuguese ancestry. His cultivated parents encouraged his artistic interests and sent him to Berlin to study painting in 1928-1929. As receptive as he was to aesthetic developments during the culturally experimental Weimar period – as seen in his early paintings and drawings – he was especially impressed by the reverence with which tropical plants were cultivated at the Botanical Garden in Berlin’s Dahlem suburb.

There the young Brazilian was bedazzled by such showstoppers as the giant water lily Victoria amazonica, with a circular, tray-like leaf wide and sturdy enough to bear the weight of a child. As Burle Marx later wrote, it was in the German capital that he discovered “for the first time, a large quantity of Brazilian plants being used for landscape design purposes. We Brazilians were not using these plants because we considered them vulgar.”

Upon his return home in 1930 he took up horticulture as a hobby, and when he showed his home garden, filled with dramatic indigenous species (which eventually comprised 3500 different varieties, with 500 kinds of philodendron alone) to Lúcio Costa, Brazil’s foremost modern architect, he received his first commission, a garden for a house Costa was designing in Rio de Janeiro. Burle Marx quickly became an avid plantsman who collected previously unidentified varieties from the wild (50 have been named in his honour), and his burgeoning reputation soon led to his being named head of the parks department in Recife.

Burle Marx cemented his reputation with a spectacular roof garden atop a mid-rise wing of the high-rise Ministry of Education and Public Health Building of 1936-1944, designed by a team headed by Costa. Burle Marx’s pulsating biomorphic composition – a series of amoeba-like beds of solidly massed monochromatic blooms and greenery interspersed with contrasting gravel walkways – brings to mind a canvas by Jean Arp or Joan Miró, wherein curvilinear animation negates the confines of the right-angled periphery. His original gouache for this scheme is included in the Jewish Museum exhibition, but without sufficient supporting material such as photographs of the finished garden and plant lists, the flat artwork reads more like a pretty carpet than a three-dimensional space meant to be moved through and experienced with all the senses.

Similar problems bedevil the show’s too-brief section on Burle Marx’s brilliant collaboration with Niemeyer on Pampulha, an ambitious leisure-activity complex of 1940-1943 outside the south-eastern Brazilian city of Belo Horizonte. This visionary development was an early pet project of a local politician with an urge to build, Juscelino Kubitschek, who went on to become the country’s president and instigator of one the grandest urban creations of the modern age: the new capital city of Brasilía.

For this vast project, Burle Marx was again engaged by Costa (who devised the urban plan) and Niemeyer (who designed most of the buildings), but the horticulturist’s contribution was not nearly large enough. Although he created individual gardens and landscape surroundings for several of the major government ministries, he was regrettably not asked to provide bold connective gestures to tie together its far-flung monumental punctuation points with grand swaths of trees, shrubs, and other vegetation.

Pioneer of the urban vertical garden

Left out of the current show are Burle Marx’s distinctive xaxim – totem-like upright “gardens” named for an eponymous tree fern, in which he arranged epiphytic orchids, philodendrons and bromeliads (plants that get their nutrients through air roots) along a freestanding matrix of cork, bark, or even metal, a device he often employed to bring a bit of untamed wildness into the increasingly built-up centres of São Paulo and other Brazilian metropolises. (An approximation of a Burle Marx xaxim, replete with living specimens, was included in the 1991 MoMA show). Decades before today’s celebrated mur végétal (vertical garden) devised by the French botanist Patrick Blanc and now widely copied around the world, Burle Marx had already developed this approach to no less stunning effect.

Beyond such a single symbolic gesture, it would have been impossible to recreate the rainforest-like intensity of Burle Marx’s tropical gardens with real plants within the Jewish Museum. Thus the absence of large-scale colour photos depicting the painterly and sculptural effects he so powerfully created are sorely missed. If only the Burle Marx show had been mounted instead by the New York Botanical Garden, which in recent years has given us a stupendous series of exhibitions on horticulture and art, including its present offering, Impressionism: American Gardens on Canvas, which evokes the interaction between artists and garden designers in the US during a pivotal moment in art history.

Of course, even a Botanical Garden exhibition would only be able to hint at Burle Marx’s characteristically comprehensive compositions. Beyond the scope of any museum presentation, the primal presence of nature – even in this designer’s highly stylised manner – is needed to fully explain the atavistic magic that emerged from his jungle fervour.

Taken From: The Financial Review.