Who you gonna call to clean up the streets? Ghostbusters and Kärcher of course! 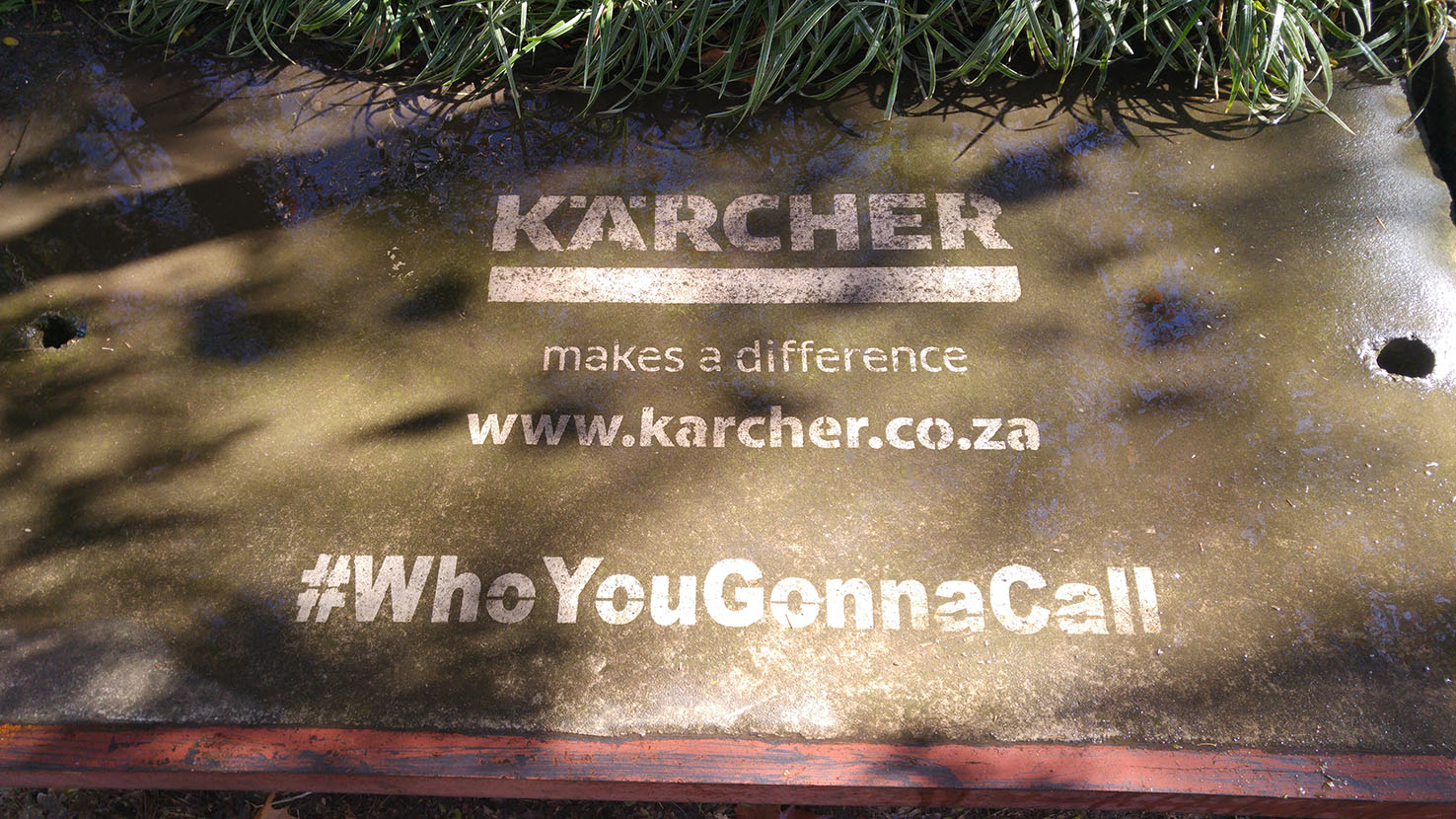 There’s something strange in our neighbourhood’s – the iconic Ghostbusters ‘No Ghost’ logo has been spotted around Johannesburg and Durban thanks to a rather unique partnership between the new Ghostbusters movie and global cleaning company Kärcher, official promotional partner on the Ghostbusters movie.
To celebrate the release, Sony Pictures South Africa and Kärcher South Africa teamed up with Durban based company Dutch Ink to recreate the famous movie logo using reverse graffiti– a method of removing dirt from a surface with a high pressure cleaner to create an image – on manhole covers and sidewalks in both Durban and Johannesburg.
‘When it came to promoting Ghostbusters we wanted to do something really different, something that communicated the fun element of the movie” says Charlie Frost from Coppermonkey Promotions, Sony South Africa’s Promotions Agency. “Not only was reverse graffiti a very different medium for us to advertise the movie with, but it also gave us a special way to highlight the partnership with Kärcher”
Dutch Ink used the K5 Premium from Kärcher range of high-pressure cleaners to blast off the dirt and in its place leave the Ghostbusters movie logo.
“Dirtbusters, slimebusters and ghostbusters can tackle even the toughest jobs with Kärcher pressure washers” says Natalie Faulds, Marketing Manager for Kärcher. “The right machine makes cleaning considerably easier. All technical features are adjusted in line with the cleaning application, and then linked to the right pressure washer class to make various cleaning tasks even easier and more efficient. Dirt is eliminated gently and thoroughly. Don’t be afraid of no dirt”
As Bashan Govindarajulu, Marketing Manager for Sony Pictures SA states “This synergy presents a fun way for us to extend on a promotion, taking it beyond the boundaries of cinema and actively using unique methods to positively affect our surroundings. Ghostbusters as a movie gifts us a rare opportunity to collaborate with likeminded businesses and with the use of a truly iconic logo, we can showcase the film’s release in a manner that benefits the environment”
As part of the campaign, Sony and Kärcher are encouraging the general public to take a selfie next to the graffiti and post it to social media for a chance to win Ghostbusters movie tickets and merchandise. The graffiti will appear at locations in Sandton and Rosebank in Johannesburg and around Musgrave and Gateway in Durban.
30 years after the original Ghostbusters movie was released, the new film opens in cinemas nationwide on July 29 and stars an all-female team of Ghost-hunters headed
up by the hilarious Kristen Wigg (Bridesmaids) and Melissa McCarthy (Spy). Following a paranormal invasion in Manhattan paranormal enthusiasts Erin Gilbert (Wigg) and Abby Yates (McCarthy), nuclear engineer Jillian Holtzmann (Kate McKinnon), and subway worker Patty Tolan (Leslie Jones) band together to stop the otherworldly threat.
For more information contact Charlie Frost @ Coppermonkey Promotions
charlie@coppermonkeypromotions.com
0723146031
Or
Natalie Faulds
Marketing Manager – Kärcher (Pty) Ltd
natalie.faulds@karcher.co.za