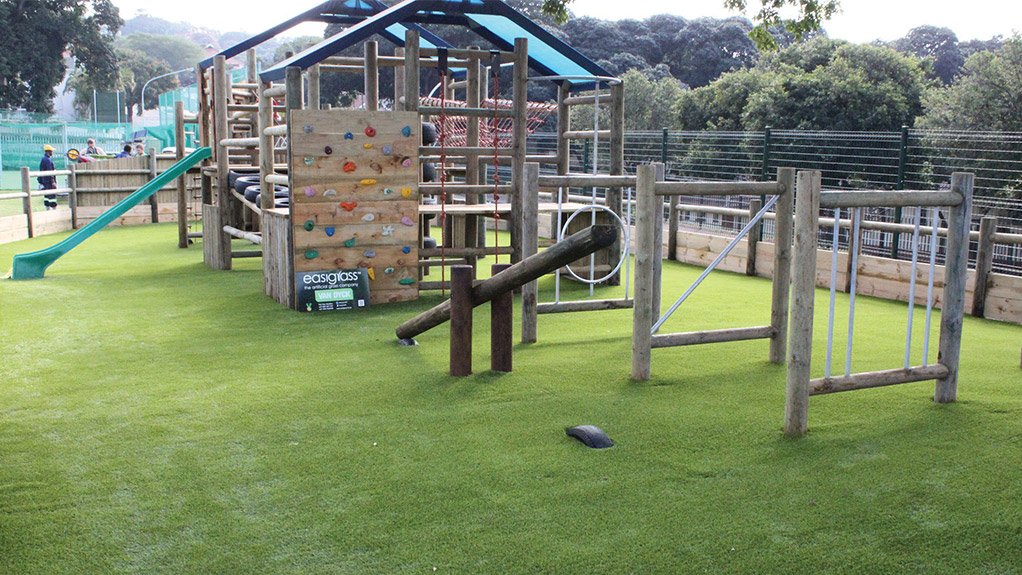 Easigrass South Africa, a division of Van Dyck Carpets, has taken the lead to redesign its entire range of 9 artificial grasses to better suit the South African market.

Herve Truniger (Trigger), National Accounts Manager forEasigrass South Africa, says the decision to redesign the 9 grass types was based on the new and latest technologyavailable and also on the fact that South African grass doesn’t look like European grass .

In the UK, he says, the most popular and common grass grown is Cynodon which has a fine blade which we refer to as “Kweek”. In South Africa, the best known grasses are Kikuyu and Berea which have far broader blades.

So from September on, home-grown consumers can expect the range of grasses that are locally supplied and installed to offer the same quality and guaranteed back up service as Easigrass the world over – but with a distinctly local flavour.

In addition, Easigrass South Africa has also introduced a South African DIY range of artificial grass known as Easi-Green. Manufactured in the Van Dyck factory in Prospecton,Durban, this single coloured synthetic grass is great for events and indoor use and will be available via hardware stores, DIY retailers and garden centres from August.

Easigrass, the world’s leading artificial grass brand, is based in the United Kingdom but sells worldwide. It is the first artificial grass company to be awarded a prestigious goldmedal for its use as part of a show garden in the history of the Royal Horticultural Society and Chelsea Flower Show.

Truniger says that Easigrass is South Africa’s most realistic and highest quality artificial grass and comes with the quality assurances, design excellence and product back up and guarantees that are expected the world over.

The advantage of buying this top end product – which is available at the country’s foremost garden and landscaping centres – is that Easigrass South Africa has access to the very latest technology and developments in the synthetic grass arena.

The recent introduction of new yarns and technology in themanufacturing process has created the new range of Easigrass to be more upright and remain cooler than the normal flat yarn synthetic grass.

Truniger stresses that just as Easigrass is not prepared to compromise on product quality, consumers should not compromise on the installation process. Like with all things, preparation is key “Easigrass is becoming a household name for quality and back up,” he says of the eight year warranty offered by Easigrass and further backed up by Van Dyck on professionally installed products.

“We use a geo textile barrier that assists with unwanted weeds surfacing and also plays an important role in stability as well as a premium crusher dust and silica sand infill that protects the backing of Synthetic grass from the elements and assists with cooling it down. It also gives the home owner a real feel when walking on our grass and eliminates the crunching sound that has been traditionally associated with artificial grass,” he says.

Within the Easigrass South Africa range, there is a productfor every application. The localised range includes:
Easi-Mayfair 50: This top of the range product is the first of its kind in South Africa and features a 50mm high pile landscape grass with a number of different colours. It requires virtually no maintenance or excessive infilling and is ideal for children and pets. It features new yarn technologythat reduces crushing and is designed to stringent British standards.
Easi-Chelsea 38C : This award winning product features a specialist yarn with a maximum stick rate and is ideal for gardens, patios, pool surrounds and display areas.
Easi-Kensington 30C: This award winning, tried and tested best seller was the first ever artificial grass to be marketed with a dead grass infill making it ultra realistic. It requires virtually no maintenance or excessive infilling.

Easi-Knightsbridge 20C: This affordable, yet luxurious product is produced according to the same high quality standards as the premier products in the Easigrass range. It is designed as a good replica for South African grass with brown bits added for extra realism.

Ideal for high footfall areas. Easi-Soccer 40, Easi-Sport 10 and Easi-Play 24: These ranges are ideal for multi-functional sporting facilities and sport applications such as soccer, tennis, baseball, netball, hockey and putting greens.

Truniger points out that Easigrass is the clean and safe solution to many of the problems associated with conventional grasses. In addition to being perfect for hard-to-grass areas, Easigrass also saves time and money when it comes to maintenance. Home owners can look forward to no more cutting, weeding and feeding as well as no more noisy lawn mowers and expensive garden service companies.

And last but not least, Easigrass doesn’t require any watering making it an ideal application for consumers that are affected by various water restrictions caused by the worst drought thatSouth Africa is experiencing in the last 30 years